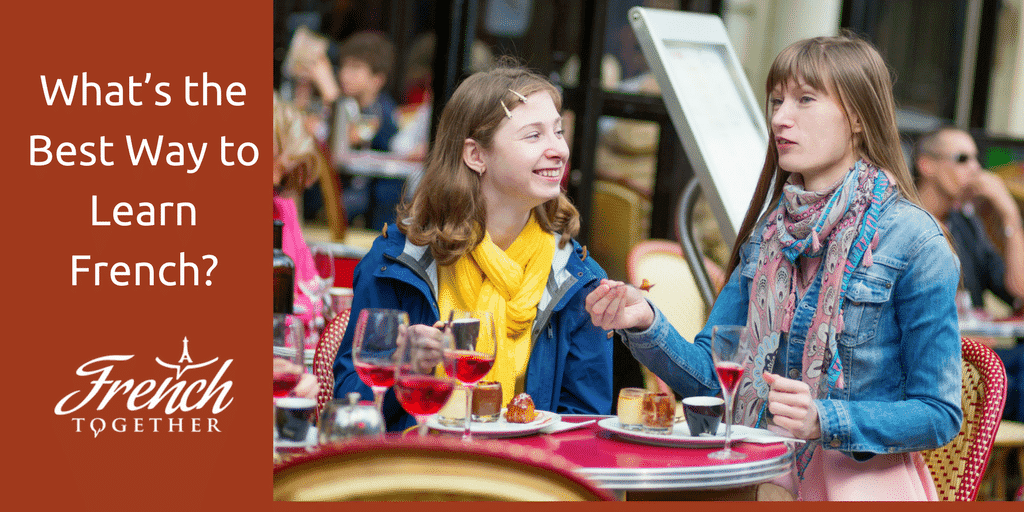 Ever wondered how long you need to speak French fluently or what’s the best way to learn French?

Some people take years, others take months and there are usually only two differences between these people: what they learn and how often they learn.

This article will help you set realistic expectations and reveal 5 rules you can follow to quickly speak French with confidence.

How long does it take to learn French?

You know what all successful French learners have in common?

Learning French doesn’t have to be difficult, but it takes time and determination. You can’t expect to be fluent quickly if you only spend 20 minutes per week studying French.

Here is an estimate from ILA France of the time needed to reach each level of the Common European Framework of Reference for Languages :

So you would need roughly one year and a half to be fluent in French if you study two hours per day and roughly five years if you study 30 minutes per day.

The 5 rules of French Together will help you do that!

Rule #1: Focus on the essential

Most French courses and classes teach you random things like the name of body parts or the conjugation of some obscure French verb nobody even uses.

People spend years learning those at school, then graduate and realize they can’t express themselves in French at all.

The truth is that you only need to know a few words and grammar rules to speak French with confidence.

Your goal as a French learner is to quickly be able to communicate in French not to write a novel and learning the 20% of French you’ll find in 80% of conversations helps you do just that.

If you focus on learning the most common French words, phrases and grammar rules first, you’ll be able to learn French must faster and communicate in French in a matter of months not years.

Next time you study French, ask yourself the following question: will I never need to know this?

If the answer is no, you would be better off using another French course.

“Neural tissue required to learn and understand a new language will develop automatically from simple exposure to the language – which is how babies learn their first language.” Paul Sulzberger Victoria University

You spent the first months of your life listening.You didn’t speak, you didn’t think about grammar rules, you just listened.

Then you started repeating words you had heard and later sentences.

Finally a few years later, you went to school and discovered that weird thing called grammar.

If you want to successfully understand and speak French, you need to spend hours listening to the language the same way you spent hours hearing your native language.

Whether you’re a beginner or an intermediate French learner, you need to make sure you spend lots of time listening to French.

Here are several ways to do just that:

So you need to listen a lot but why listen before you read? Wouldn’t reading before listening work equally well?

It turns out it wouldn’t because there is one mistake we all make when we read, and this mistake can destroy your pronunciation.

Before I tell you more about it, please read this word out loud:

As an English speaker, you probably pronounced it the English way as you read it.

And that’s the problem. If you see French words before you have a chance to hear them pronounced, you’ll instinctively pronounce them the way you think they should be pronounced rather than the way they are actually pronounced.

That’s something I explain in detail in this article dedicated to French pronunciation.

I spent years learning grammar rules by heart at school.

The result? After thousands of hours learning English and German at school, I could barely create a sentence.

One day I decided to stop studying grammar rules and watch How I Met Your Mother instead.

This doesn’t mean you should never open a grammar book. but that grammar shouldn’t be your priority.

If you regularly get exposure to authentic French, you’ll naturally learn grammar in context by seeing how sentences are constructed and verbs conjugated.

You don’t need to learn grammar rules by heart to speak French correctly.

Try asking a French person why they say something the way they say it. More often than not, you’ll hear “I don’t know, it just feels right”.

That’s because they intuitively know whether something is correct or not. Their knowledge of grammar rules comes from experience, not from learning rules by heart.

There are some cases when knowing rules can help you learn faster. For example, knowing that most words ending in “e” are feminine is a nice way to avoid mistakes at first. But ultimately, nothing replaces exposure to the language.

Do you know what all successful French learners have in common?

They never give up!

They know learning French takes time, they know they’ll make mistakes and that it won’t always be fun. And they accept that.

If you study regularly (preferably every day) and use every gap in your day to get exposure to the French language, you’ll make progress faster than you have ever thought possible.

There are days when you simply won’t feel like studying French.

It may not feel like studying, but it’ll still help you get closer to your goal: becoming fluent in French.

There are also days when the idea of studying French for 30 minutes will discourage you. That’s why I recommend you to follow the 5-minute rule.

Tell yourself you’ll study French for at least 5 minutes every day (or even better, write it down).

5 minutes is short enough to make it easy for you to get started and long enough to give you momentum and motivate you to study for a longer period of time.

Lots of users of the French Together course have told me that the 5 minutes rule has helped them study French more often and make more progress.

Rule #5: French is made for speaking

Picking a French course is good, studying regularly is great. But you know what’s even better?

Practicing and accepting that mistakes are unavoidable.

That’s why I recommend you to speak as soon as possible.

As a beginner, your first conversations will be rather short. But you’ll quickly be able to say more. And you’ll immediately know whether you pronounce and use French words the right way.

Not to mention that using a new language with someone is fun and a great way to make friends.

You can click here to see how to easily find a conversation partner near you.

And you, what do you consider the best way to learn French?

12 thoughts on “What’s the Best Way to Learn French and Quickly Speak French with Confidence?”