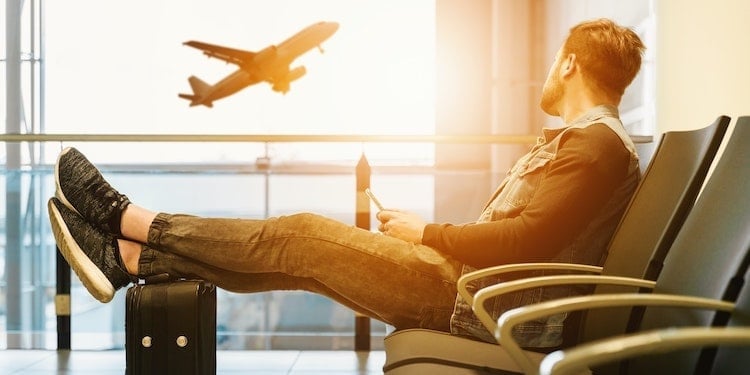 French people have been wishing each other Bon voyage (Have a nice trip) for centuries. The saying is so common that it’s one of those French phrases that’s been adopted into other languages, including English.

Let’s take a guided tour of Bon voyage  and learn about the travel habits of the French along the way!

Table of Contents
What does bon voyage mean?
Wishes in French with bon(ne)(s)
Other ways to wish people well in French using bon(ne)(s)
How to take bon voyage to the next level
Do the French say Bon voyage a lot?: The French and travel

What does bon voyage mean?

Bon voyage means “Have a good trip”. But as you can see, there aren’t quite as many words to it. Literally, it’s just “Good trip/voyage”.  So, how did we get there?

Wishes in French with bon(ne)(s)

Both of these sentences are still used today, but they tend to be more formal (for the first) or uncommon (for the second).  This is because the French like to keep things brief, so why not just say it in two words?

Bon voyage isn’t the only phrase that expresses a wish like this. There’s a whole list of them, and you may know at least a few already.

You’ll frequently hear and see these phrases – and you may discover some others, as well. In French, you can add Bon, Bonne, Bons, or Bonnes to a noun (often a gerund (a noun that describes an action)) to say “Have a good….” or “Enjoy…”.

For instance, if you run into someone as you’re headed to the movies, they might tell you <<Bon film !>>(“Enjoy the movie!”).

Or you could hear Bonne baignade ! (Have a nice swim!),  and so on.

The structure Bon(ne)(s) + noun works for so many situations, but it can be tricky for us non-native speakers sometimes. For instance, if you want to say “Enjoy the book!”, you can’t use the word livre (book); it would be Bonne lecture! (Happy reading!).

Expressing a complex wish, like “Have a nice day at work!” can also be confusing. You can’t just say Bon travail ! – that literally means “Good work/Good job!”.

So, what can you do to be sure you get these phrases right?

Sometimes, using these expressions is something that will come from listening to and absorbing French.

Other times, you might be able to correct yourself if you realize you’re using an expression that already means something, as in the case of Bon travail.

And when it comes to one of those complex wishes, like “Have a good day at work,” it’s probably best to just say it in a different way – it’s not a simple idea, after all.

….Then again, since the French prefer to keep things concise, you could probably just say Bonne journée and leave it at that.

If this seems overwhelming, don’t worry. The phrases with bon(ne)(s) that I’ve listed, as well as a few others, are the most common ones, and are important to know. But if you feel unsure about using bon(ne)(s) + noun otherwise, remember that there are always other ways to say what you want.

For example, I could say « J’espère que tu passeras une bonne journée au travail. » (I hope you’ll have a good day at work) or «J’espère que ce livre te plaira. »  (I hope you’ll like this book.). Just think about the meaning behind the wish.

The expressions we’ve just learned about translate to “Have a good____”. But there are some other expressions in French that use bon(ne)(s) to wish people well in a slightly different way.

In these cases, instead of talking about something concrete or expected, these expressions refer to things like luck or the future.

You’ve probably come across one of the most famous before:

There’s no major difference between these expressions and others like them, and the ones we looked at earlier, but there are two subtle ones you may come across:

• These well-wishes tend to stay in their original structure. Whether they’re stand-alone statements, or used in a longer phrase (ex: Je vous souhaite une  bonne continuation), you wouldn’t replace Bon/Bonne with Super in any of these phrases.

• When you’re talking about events, like your continued career or your path back to health, you add un or une before bon/bonne when it’s used in a sentence, as you can see in the example in the previous paragraph. But when you talk about a totally abstract concept or feeling like luck or courage, you don’t use an article (ex: Je te souhaite bon courage.) .

How to take bon voyage to the next level

Although you can’t add to or change the core phrases we saw in the last section, you can modify bon voyage and its closest cousins a bit.

Most of the time, Bon voyage is a perfectly normal way to wish someone a good trip. But maybe you want them to know you hope they have an EXTRA good trip.

You’ve probably realized that when you add très, super, or excellent, you can’t just use Bon voyage on its own, though.

Do the French say Bon voyage a lot?:  The French and travel

The average working French person gets five weeks of paid vacation a year, plus about a week’s worth of personal days. There are also a number of national holidays in France, and schools have two-week vacations every six weeks, plus two months of summer vacation. Train tickets are usually affordable, and low-cost airlines operate out of many French airports. So it’s no wonder that the French are among the nationalities that travel the most.

Where and when do the French travel?

But where do they like to go?  It turns out that most French people tend to travel primarily within France.

Part of this can be explained by the French rail system, which is highly developed and fairly affordable. It’s easy to go to major cities or even small towns, and since many trains are high speed, a trip like that might only take a few hours. Add to this the wide range of landscapes to be found in mainland France alone – from the warm beaches of the Côte d’Azur, to the ski slopes of the Alps, to attractions in major cities like Paris. France is even home to Europe’s only Disney theme park.

And of course, many French people use at least some of their vacation time to visit family and friends who also live in France.

As for when the French travel, there are some traditions around that. But it turns out they don’t totally reflect reality.

For instance, French people typically go on their longest or even only vacation in summer. August is considered a month when everything shuts down (well, except in vacation/tourism destinations, of course). Entire businesses will close their doors because everyone is on vacation.

But with globalization, as well as new, strategic ways of thinking, that’s changed in recent years. According to recent statistics, 69% of the French population takes a summer vacation. But many companies have at least a few employees who stay behind in August – and those people aren’t always disappointed about it. Some French people prefer to work during this time because their offices are usually calmer since so many of their coworkers and bosses are away. They take a vacation another time – when most destinations will be less crowded and pricey, besides.

Similarly, in winter, especially during the winter school holidays, French people traditionally go on ski trips. And yet, it turns out that only 1 in 10 French people go skiing every year.

Part of these lower-than-expected numbers is due to cost. Not everyone can afford to travel – especially taking a ski trip, which involves a lot of expenses beyond room and board.

Which countries do the French travel to most?

Although France itself is the number-one travel destination for French people, the French do go abroad, as well. And when you think about it, with all of the vacation time they have, a majority of a French person’s travel might be national, but they might go beyond their borders for at least one of those trips.

The top countries visited by the French in 2019 include Spain, Greece, Italy, Tunisia, Turkey, Egypt, and Russia, as well as Canada and the United States.

What do people think of French tourists?

All of this traveling has earned the French  a reputation in the hospitality and tourism industries, as well as with locals in certain places. The typical French tourist is known to be critical, curious, cheap, and seductive.

As some of the people interviewed in this article suggest, seemingly negative traits like being critical may also make them have a more in-depth travel experience. For instance, a tour guide in India explains that instead of saying that they like or don’t like an ice cream flavor, a French tourist will often ask about what’s in it.

They might also make suggestions for how its taste might be improved, which goes with another way the French are perceived: as comparing everything to how good it is or how much it costs back in France.

None of this is to say that the French are terrible tourists (even though they often joke about this amongst themselves). After all, tourists from every country have their good and bad points, and a lot of times it has to do with how well their culture meshes with the local one.

For what it’s worth, one thing I’ve noticed about French people who travel to other countries is that whether or not they complained or made comparisons to France on-site, they generally seem to see their experience as positive, even as a way to expand their knowledge and perspective on the world. Whether they spent a week sunbathing on a beach somewhere, or visited a new city or monument, they come home with a sense of having learned something, and (understandably) often nostalgia for the place they left.

A recent survey shows that 53% of French people see taking a vacation as important and something they’re willing to make sacrifices for.  In addition to self-care and getting away from it all, I think some of this could also be chalked up to wanderlust and a natural curiosity and fascination with other places.

Do you have a favorite place to travel? How about somewhere you dream of going – particularly in France? Whether you’re planning a trip or just armchair traveling, Bon voyage!