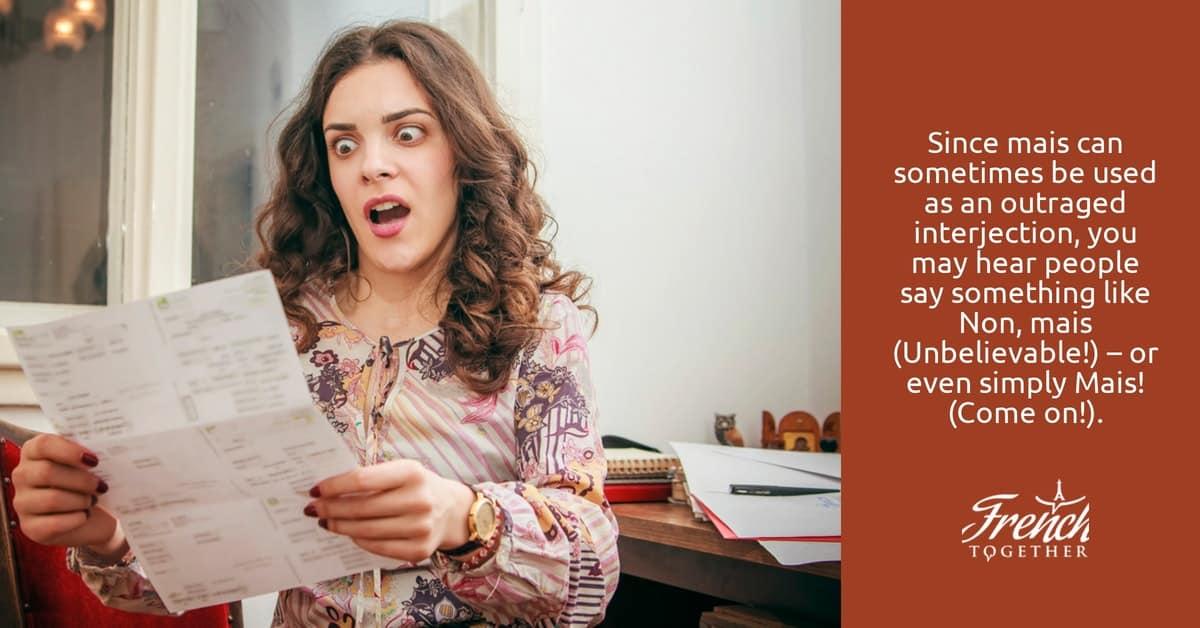 There are some words that hold entire sentences together but get overlooked. We spend a lot of time learning complicated verb tenses and intriguing vocabulary words in French, but we may not give much thought to those little, essential elements.  And then, one day, you might find yourself wondering about one of them.

Do we have the answers to these questions? Mais oui ! (But of course!).  Read on to learn all about how to say and use “but” in French.

How do you say “but” in French?

As a general rule, “but” is one of those words that has a more or less exact French equivalent: mais.

Mais also has meanings that don’t translate to English as “but”.  These include:

There are some additional ways to translate “but” into French for some old-fashioned or unusual expressions – for instance, “all but”, or phrases like “She was but a child”. To learn how to translate expressions like these into French, check out WordReference’s page on “but”.

How to translate “but” into French in other contexts

In English, there are a few more ways to use “but” than there are in French. One very common one is “but” as “except (for)”.  For instance, “Everyone but Mary came to the party.”

In French, you wouldn’t use mais to express this; instead, you’d use the word it signifies: “except”. So, the sentence would be translated: Tout le monde est venu à la fête, sauf Mary.  Here’s another example: Tous les enfants sont ici sauf un. (“All of the children are here, except one.”)

This is the most basic way to translate “but” as “except (for)”. There are, of course, other ways to say “except (for)” in French that you could substitute in certain situations.

Another way you might use “but” in English that doesn’t translate into French is in a sentence like “I can’t but agree with you.”  When using this structure, you would use ne…que in French: Je ne peux qu’être d’accord.

This use of “but” is fairly rare in many versions of English. For example, as an American, I would tend to say “I can’t help but agree with you” instead, and if I did that, “can’t help but” is translated completely differently( as we’ll see a little further on).

How to use mais

Like its English equivalent “but”, you can place mais either at the start of a sentence or in the middle.

Another thing mais and “but” have in common is that its placement is a point of contention for grammarians. Some claim that starting a sentence with mais (or any of its synonyms, which we’ll see later on) is grammatically incorrect. Still, everyone from famous authors past and present, to newspapers, to people in everyday life does this, so it seems like a moot point.

With this in mind, feel free to put mais and its synonyms at the start or the middle of a sentence. But if you’re communicating with stuffy grammarians, you may want to consider sticking to the middle.

Where mais differs from the English usage of “but” is that, in certain contexts, you can also use it on its own or put it at the end of a sentence or statement.

Since mais can sometimes be used as an outraged interjection, you may hear people say something like Non, mais !(Unbelievable!) –  or even simply Mais! (Come on!).

Mais! on its own is usually used in the heat of the moment, say if two siblings are fighting over something and one tries to grab it out of the other’s hands. The one holding it could say Mais! to signify that they’re outraged and annoyed, and, essentially, protesting the other person grabbing this object from them.

Note that using mais in these ways is very informal. Additionally, unless someone is writing a true-to-life contemporary dialogue or possibly chatting online, you probably would never see mais used these ways in a written context.

How to say some common phrases with “but” in French

Some common English expressions or phrases that use the word “but” translate to something similar in French.  Mais some others translate quite differently.

Let’s take a look at some common expressions with “but”, translated into French:

You can find more expressions with “but” and their French translations here.

French offers a good selection of synonyms for mais. These are especially important to know because repeating words is considered a huge no-no in French formal writing and speeches.

Of course, there are exceptions, notably slogans, song lyrics, and literary language. But when it comes to expressing thoughts, the French value a fine balance of concision and a lack of repetition above all.

On the other hand, in informal, everyday spoken French, this isn’t as important to keep in mind as it is when you’re writing, especially when you’re writing something formal, professional, or academic. Still, in any context, excessive repetitiveness could be seen as annoying or a sign of a lack of intelligence. Non-native speakers usually get a pass, however, so don’t worry too much. Still, it’s never a bad idea to expand your vocabulary.

So, if you’re writing an academic, professional, or other formal document in French, try to vary your mais’s with some of these alternatives. And even if you’re not in that situation, it’s good to know these because you’ll come across them in books, newspapers, TV, magazines, radio shows, websites, and so on.

Note that, with the exception of par contre and seulement , all of these words are at least a little more formal than mais.

And now, without further ado, here are the most common synonyms for mais:

You can find more sentences with cependant here and here.

You can see more sentences with en revanche here.

You can see more sentences with néanmoins here.

Sandra aime les chats; or elle n’en a pas chez elle. (Sandra loves cats, and yet, she doesn’t have any at home.)

You can see more sentences with par contre here.

You can see more sentences with pourtant here.

Note that this synonym is one of the few on this list that’s somewhat informal – you shouldn’t use it to signify mais in formal or academic writing.

J’aime ton chat, seulement, il me griffe chaque fois que j’essaie de le caresser. (I like your cat, only he scratches me every time I try to pet him.

You can see some additional sentences with toutefois here.

A note about punctuation

As you may have noticed from the examples, while certain linguistic aspects of French are very strict, compared to English, punctuation isn’t.

There aren’t many hard and fast rules when it comes to how to punctuate sentences with these words. For instance, semicolons don’t seem to be as commonly used in French as they are in English, so you’ll often find a comma in their place.

Now that you’ve read our guide, are you an expert on using mais and its synonyms? I hope you’ll answer <<Mais bien sûr !>>

Do you have a favorite expression with mais or a favorite mais synonym? Feel free to share it in the comments!

Photo 1 by Edvin Johansson on Unsplash; Photo 2 by Georgina Vigliecca on Unsplash ; Photo 3 by Heather M. Edwards on Unsplash