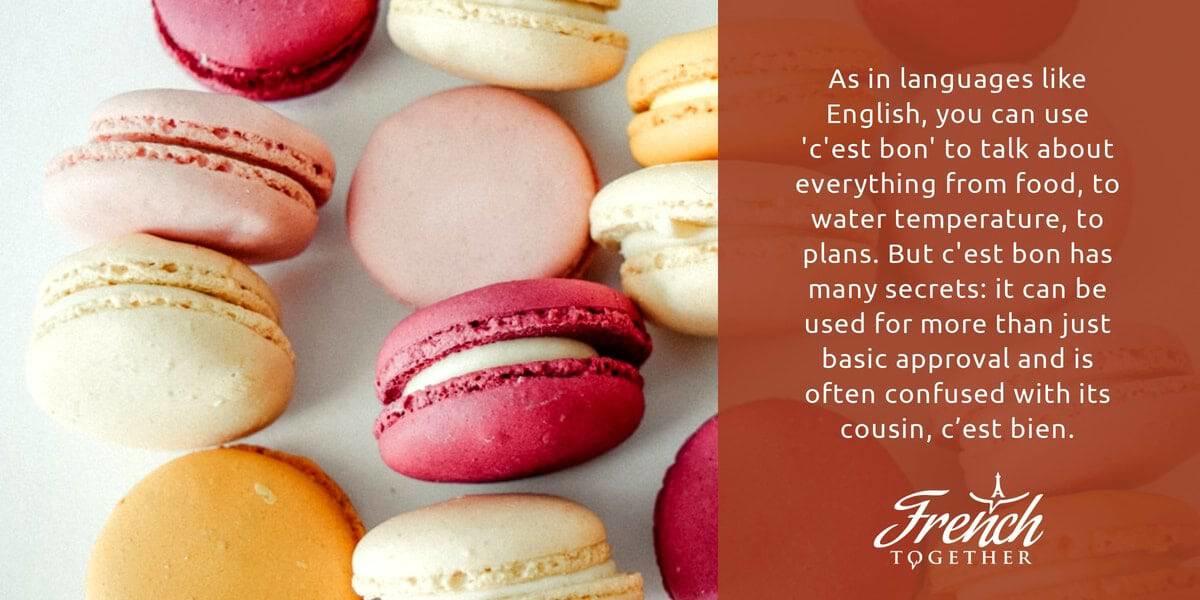 When you’re learning a language, some phrases seem like a dream come true, easy to understand and translate. C’est bon is one of those, as its name coincidentally implies. Or, rather, it can be.

Let’s take a closer look at this phrase that’s often confused with its cousin, c’est bien, and whose meaning ranges from basic approval, to pornography.

What does c’est bon mean?

If you translate c’est bon word-for-word, this is what you get, and it’s perfectly correct. As in languages like English, you can use it to talk about everything from food, to water temperature, to plans.

C’est bon can be used to confirm that something is correct.

For example, when I was teaching English in French elementary schools, after they filled out the worksheets I gave them, the kids would ask me, C’est bon?  In other words, did they do the exercises right?

The first two meanings of c’est bon are somewhat related; after all, if something is correct, it’s generally considered to be good, as well.  With this third meaning, c’est bon veers off a bit. In this case, it means “That’s enough” or sometimes even “It’s done.”  A synonym in French is a phrase you’ve probably heard, Ça suffit.  Like Ça suffit, in this context c’est bon is often followed by the word maintenant.

With that in mind, C’est bon can be used to express exasperation – for example, «Oh l à l à, c’est bon, arrête de me dire que je ne sais pas faire. » (Come on, enough now – stop telling me that I don’t know how to do it!).

Taking things a bit farther, you can go from “enough” to “done”. You’ll often hear French people finish a task and say “C’est bon!” or plan something: «Alors, on fait le ménage, on déjeune, et puis c’est bon, on partira. » (So, we’ll tidy up, have lunch, and then we’re done, we can go.”)

If you think my mind is in the gutter, you only have to do an online search for “C’est bon” – you’ll see the Urban Dictionary definition (that is, this sexy meaning) as one of the top results.

That said, it’s all about context. There is absolutely nothing vulgar about eating a cake your sweet little old lady French neighbor made and saying appreciatively, «Miam, c’est bon! » So, don’t be afraid to use it or shocked by hearing it. But don’t be surprised if you hear this same phrase during a torrid sex scene.

How to form a basic sentence with c’est bon.

If you don’t want to stop at c’est bon, but want to specify what’s so good, you usually add it after the phrase. For example: C’est bon, ce livre (This book is good).

That said, this kind of statement is less common than simply saying  C’est un bon livre. That’s because C’est bon followed by a noun shows emphasis – you really like this thing/person/animal or are surprised that you do! So if you’re just stating an opinion, it’s better to stick with C’est un(e) bon/bonne…

If you want to say an action is good, you would use C’est bon de… followed by the infinitive. But you would only use this phrase if you’re directly addressing someone about something they’re doing or thinking of doing, or if you’re in an informal setting; otherwise, you’d say Il est bon de…  I’ll talk more about this a little later on.

The negative form of c’est bon

Whatever its meaning in a particular context, the negative form of c’est bon, as you’ve probably guessed, is ce n’est pas bon.

However, unlike c’est bon, you don’t usually hear it as a standalone phrase. Instead, it’s typically part of a longer sentence. For example, Ce n’est pas bon de voler. (It’s not good to steal.)  Or “Ce n’est pas bon, ce gateau” (This cake is no good).

If a French person is 1. talking fast, 2. a young kid just mastering their language, or 3. using informal or “street” language, you’ll usually hear them say C’est pas bon instead.

Phrases with c’est bon – a plethora of prepositions and articles

When you use them to make a sentence, some French phrases are closely associated with a particular preposition or article. In the case of c’est bon, you have several options.

This may seem to make things more complicated, but actually, it’s the opposite. In general, if you know English, you can usually directly translate the preposition or article you’d use in English into French.

This variation of c’est bon is actually the most common one of them all. It’s much more common for French people to say C’est un bon or C’est une bonne followed by a noun, to express that something is good, than C’est bon(ne), ce(tte) [noun].  The latter shows enthusiasm and/or surprise, while c’est un(e) bon(ne)… is a more general way to state an opinion.

(Okay, I know that “de” technically translates to “of”, but if you’re somewhat familiar with French, you know that “de” is an equivalent of “to” when using certain verbs or phrases.)

Example: C’est bon que tu aimes ton beau-père. (It’s good that you like your stepfather.) Note that the verb in this phrase has to be conjugated in the subjunctive.

Here’s something I think at least once a day: C’est si bon, le chocolat.  Note that you can also say c’est tellement bon.

You can find more examples of c’est bon and the many different prepositions used with it in this extensive list.

A few paragraphs back, I said that I often think, “C’est si bon, le chocolat.” But my chocolate-related sentiments better translate to the extremely common informal phrase, C’est trop bon – “It’s too good”. The exaggeration in this phrase makes it informal; after all, the French tend to downplay their enthusiasm. So you won’t hear this phrase in formal or traditional settings or movies/TV shows. Young and middle-aged people often use it, but older French people most likely will not. You can use it as a standalone statement, or add what you’re talking about. For example: C’est trop bon, ce film.

Note that this structure works because it implies a ton of enthusiasm for something; if you just want to say something is good, or even very good, but in a more neutral way, the most common phrase with bon that you’ll hear to do this is C’est un bon film or C’est un très bon film.

This common phrase translates to “This is/It’s really good/This is so good./Isn’t it great…”  For example, imagine if you’re on a trip with a friend  and they test the water of your five-star hotel’s swimming pool.  It’s the perfect temperature. They tell you, «Comme c’est bon! »  You can also use this phrase as a sentence: Comme c’est bon de partir en vacances !  (Isn’t it great to take a vacation?)

This is the same as « Comme c’est bon », just longer to say and a slight bit more formal.

He’s/She’s the one.  This is one of my favorite French expressions. It means you’ve found the perfect person for you to spend your life with. In English, we call this person “the one”, which is also beautiful in its way. But I like how the French expression suggests that you were just waiting for that person who was the good fit for your life.  Be careful to always use C’est, not Il or Elle est. Elle est la bonne could mean “She’s the maid.” And Il est bon/Elle est bonne would mean the person is good in bed.

You may have seen both of these very similar phrases before. Or maybe you just encountered them together for the first time earlier in this very article.

What’s the difference between c’est bon and c’est bien?

Confusing c’est bon and c’est bien is a common mistake for us French learners. The problem, of course, is that the two phrases are so similar and basically mean the same thing.

Here’s how they differ: Remember that bon is an adjective that means “good”, while “bien” is an adverb that means “well.”

The perfect way to illustrate this is with a funny (and sometimes embarrassing) mistake many of us non-native French speakers have made or will make at some point.

In English, you can say “I don’t feel well,” but in American English, at least, “I don’t feel good”, while grammatically incorrect, is much more common (just think about poor Spiderman’s words to Iron Man in “Avengers: Infinity War”).

That being said, there aren’t always hard and fast rules for using bon and bien in French, and the divide between the two can be somewhat vague, especially when it comes to a short phrase like c’est bon or c’est bien.

So for example, let’s go back to that phrase I think on the daily, C’est trop bon, le chocolat! I would use bon here because I’m talking about the taste of chocolate, a sensorial experience.

Someone might reply, «C’est bien de penser aux choses qui te rendent heureuse. » (It’s good to think about things that make you happy.)  Bien is used here because they’re referring to an experience or way of thinking, not a physical sensation.

For example, if you went to see a movie, a French friend would ask you “Alors, c’était bien, ce film?”

That doesn’t seem to make much sense; after all, if you want to say the film is good, you’d use the adjective, bon. But in this case, they’re asking about the overall experience of going to the movie, the movie itself, etc., which is not a sensorial experience but rather an abstract combination of events in which they did not take part.

Let’s say that you had a terrible time but that the movie itself was good. Then, you could say something like: « Je suis arrivé en retard et il n’y avait plus de popcorn ; heureusement, c’est un bon film. »

Remember what I wrote before; C’est un(e)  bon(ne)… is the most typical way to say something is good.

The good news is, the more you hear and use these phrases, the more you’ll start to instinctively use them the right way – trust me. In the meantime, there’s more good news: Most French people will probably understand what you mean whether you use c’est bon or c’est bien.

Have you ever used the phrase c’est bon in French? Was it, in fact, bon, or did you make a funny mistake?