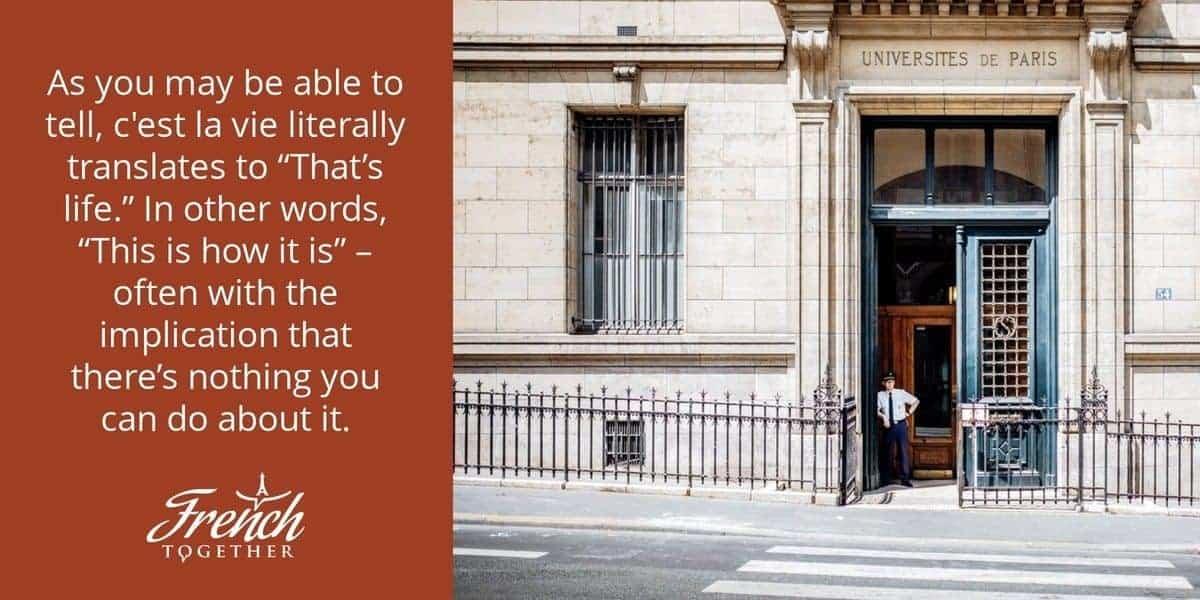 As a dramatic person, I often get a bit carried away when something bad, frustrating, or even simply surprising happens.  But under the same circumstances, I’ve seen many French people shrug and say C’est la vie – or some variation of that.

C’est la vie is an expression you might have heard, too, even outside of your French lessons or travels. It’s one of those terms that’s been adopted by other languages (including English) or is simply very easily recognizable to non-French speakers.

Let’s look at this iconic French phrase – and some of its cousins.

Interestingly, like C’est la vie, all of them are the title or refrain of a catchy song, which you’ll also get to discover below!

The meaning of c’est la vie

So what does C’est la vie mean?

As you may be able to tell, c’est la vie literally translates to “That’s life.” In other words, “This is how it is” – often with the implication that there’s nothing you can do about it.

That may sound negative, and in many contexts, it is. I’ve eve heard of people calling it a de-motivating phrase, because essentially, it means why fight. You can’t do anything about the situation, right? No superhero is going to say it – or at least, no typical one; they would try to change things, as would lots of everyday inspirational figures.

But C’est la vie isn’t always negative. For example, take one of my favorite songs, Chuck Berry’s “You Never Can Tell”. It’s a love song about two teenagers who fall in love and make it work despite being young and poor. In this case, C’est la vie reinforces the fact that life is surprising (“C’est la vie, said the old folks, it goes to show you never can tell.”)

Another great musical example is Khaled’s Franco-Arab hit C’est la vie which is about forgetting your troubles in love and just enjoying the night and dancing. In this case, C’est la vie could be seen as a sort of “What can you do, there will be problems in a relationship, now let’s dance,” or it could be that the act of dancing and enjoying life is what life is all about.

As you can see from these songs, C’est la vie can be used in a negative, positive, or simply observational context, and sometimes its ambiguity can yield some cool results.

Of course, there are many other ways to express C’est la vie. Here are several that you’ll regularly hear in French-speaking countries.:

According to this forum thread, C’est comme ça is often considered the translation of the English-language expression “It is what it is.”

But I don’t think that tells the whole story. It can be a neutral statement, but it can also be a more insistent version of C’est la vie – essentially, “That’s the way things are.” I often hear it used by parents whose kids complain about one of their rules, or something they can’t have or do.

Note that this phrase can also be used confirm or elaborate on a description. (Example: C’est comme ça mais avec plus de fraises (It’s like that but with more strawberries).

In music: “C’est comme ça” by delightful New Wave group Les Rita Mitsuko is known for its catchiness and award-winning video. Its lyrics are notoriously enigmatic, but the song is a great way to get this phrase stuck in your head.

On n’y peut rien (literally ‘We are/One is not able do to anything here/there”) means there’s nothing to be done about an abstract situation (or life in general).

Example: J’aime la paix mais faire la guerre fait partie de la nature humaine. On n’y peut rien. (I’m all for peace but warfare is a part of human nature. There’s nothing we can do about it.”).

In music: Famous French songwriter Jean-Jacques Goldman’s “Et l’on n’y peut rien” is a song about how there is nothing we can do when it comes to love.

You may have noticed the l’on in the title instead of on. Typically, l’on is used in writing or more formal contexts. This is supposed to be a popular song, though, so I’m assuming it was done here for reasons of sound and rhythm.

Essentially, there’s no point in fighting or wanting something else, this is how it is.

Note that this expression is rarely, if ever, used with vous, since the tu here can be the person you’re talking to, or just a way to address a group or vague entity.

In music: Contemporary French group Yelle’s fun song “Que veux-tu” addresses a crush as most of us do in our hearts: Que veux-tu, je suis folle de toi (“What can you do – I’m crazy about you!”)

When French Together founder Benjamin Houy and I were discussing this article, he said it would be interesting for me to include any observations I might have about how the French deal with tragedy: Is C’est la vie generally the French approach to life?

The question gave me a lot to think about.

First, it’s important to say that “the French” or “French people” is, of course, a blanket term. There are all kinds of French people, and they may all react differently to things. I know some French people who cried when Johnny Hallyday died, or who tear up when they watch the same TV shows I (an overly emotional Italian-American) do.  I’ve seen French people holding each other and quietly sobbing on the street while looking at impromptu memorials set up for friends who were victims of the 2015 terrorist attack at the Bataclan. I know French people who have tattoos in memories of deceased loved ones.

But overall, the French do seem to take a C’est la vie approach to tragedy. Maybe it’s a bit like the British “stiff upper lip” idea, or its current incarnation, “Keep calm and carry on.” When a sad or tragic event is covered on the French national news, the newscasters may seem slightly moved, but we are nowhere close to Jimmy Kimmel (who, granted, isn’t exactly a newscaster) crying over Cecil the Lion. The story is covered in a neutral way, without seeking out drama. Even the saddest details are recounted in a calm, informative voice.

Tragedies aren’t dwelt on here. While there are annual ceremonies to commemorate everything from the courage and sacrifice of soldiers in both World Wars, to the victims of recent terrorist attacks, when news of a terrible event occurs, it’s not lingered over. There aren’t souvenirs commemorating the Bataclan attack the way there are 9/11-related objects of all sorts. The French are more reserved about showing their emotions. No one denies these events are sad and even traumatizing, but that’s all kept neatly away.

On a personal level, everyone is different. But when there’s a sad or tragic event, French people collectively seem to focus on improving the situation or getting past it, rather than wallowing.

After 9/11, it was impossible to think of anything else. Funny talk shows and other humor-related offerings stopped airing for a while. On the other hand, almost immediately after the November 2015 terrorist attacks here in Paris, I was astonished and full of admiration for the fact that Parisians decided to deliberately sit outside at restaurant terraces. It was a message that their lifestyle would not change, no matter what happened – a true “We do not negotiate with terrorists” if there ever was one.

In this way, C’est la vie really might be the appropriate overall French response to tragedy, whether you think the phrase is about feeling like this is how it is and there’s nothing we can do, or saying “This is how it is, now let’s move on and not let bad things stop us from living.”