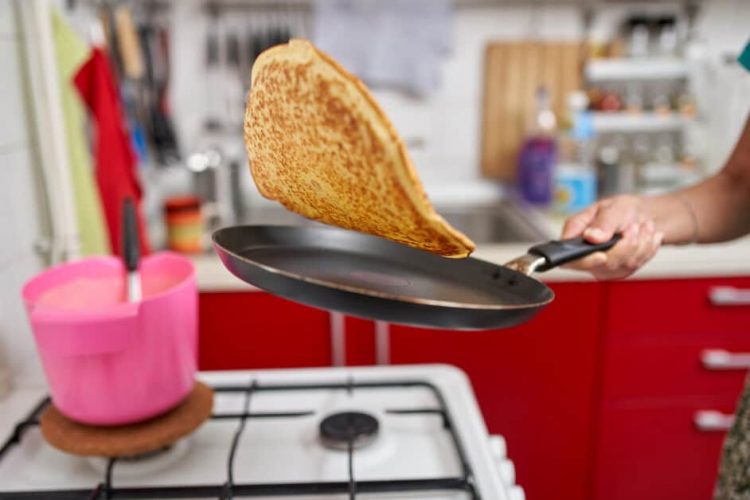 Let’s learn more about La Chandeleur, including how to flip a crepe for prosperity on this day!

What is La Chandeleur?

La Chandeleur is the equivalent of the Christian holiday of Candlemas in English, which celebrates the presentation of the infant Jesus in the temple.

Like the English word, Chandeleur has the word “candle” (chandelle) in it. This is because, traditionally, candles were blessed at church on this date (in homage to Jesus, “the light of the world”). But today, there’s another, better-known tradition associated La Chandeleur in French culture: eating and flipping crepes.

When is La Chandeleur?

La Chandeleur is celebrated on February 2.

What is the history of La Chandeleur?

La Chandeleur is a very old holiday. It has ties to pagan celebrations that fell around the same time, most notably Lupercalia, a holiday celebrated across the Ancient Roman Empire (of which France, then called Gaul, was a part).

The holiday became associated with crepes around the 5th century , when Pope Gelasius I had pancakes given out to pilgrims who arrived in Rome. But Lupercalia may also have influenced this tradition, since during that holiday, Vestal Virgins made offerings of cakes.

Over the centuries, different regions of France – as well as French-speaking parts of Belgium and Switzerland – developed their own local variations on the customs and superstitions tied to La Chandeleur. Many of these involve blessing and lighting candles.

How is La Chandeleur celebrated?

Traditionally, there is a special mass and blessing of candles at church on La Chandeleur, but France’s population is mostly made up of non-practicing Christians, so most people don’t attend this.

In some areas, La Chandeleur is the day when Christmas decorations are put away. But in France in general, especially with regards to large-scale light and window displays, these are usually put away in early January.

Today, for most French people, La Chandeleur is mainly associated with two things: superstitions and crepes.

There are several Chandeleur superstitions, and some vary slightly by region.

One of the most famous is that if you can carry a lit candle from the church back to your home without the flame going out, you’re sure to stay alive for the following year.

Another Chandeleur superstition is that if the wax of a candle lit for a religious procession melts only on one side, a loved one will die within the year.

The most famous and widespread Chandeleur superstition, though, involves the traditional food of La Chandeleur: crepes.

It’s said that on La Chandeleur, if you hold a coin in one hand while using the other, your dominant hand, to successfully flip a crepe in a frying pan, you’ll have a prosperous year (others say a year of good weather).

There are some variations on this superstition, as well as a few lesser-known Chandeleur superstitions. But the basic gist is that if you want a prosperous year (or a year of good weather), you’ll need a frying pan, a coin, and the ingredients for homemade French crepes.

What do French people do on La Chandeleur?

Some French people might light candles, attend mass, and pay attention to local superstitions on Candlemas, but the one thing you can be most certain they’ll be doing is flipping and eating crepes.

Some people might refer to La Chandeleur as Le Jour des Crêpes (Crepe Day), and with reason: a recent survey found that 90% of French people eat crepes on La Chandeleur, many of them making and flipping them at home.

Still, if you love crepes and are looking for good luck in the coming year, why not make some crepes on La Chandeleur at your own place?  Easy French crepe recipes abound online, and you can find some advice and videos on crepe flipping in our article on French crepes.

La Chandeleur and the US holiday Groundhog Day fall on the same date, February 2. The similarities don’t stop there: both are holidays with interesting roots that involve superstitions and forecasting the next year (Remember that some people even flip crepes on La Chandeleur to have good weather).

It turns out there is a reason why these holidays fall on the same day. Although Groundhog Day has its roots in German culture, there is a distinct connection between La Chandeleur/Candlemas and predicting the weather in different ways and across different cultures.

So, if you’re an American Francophile, take your pick. Maybe you’ll have good weather if the groundhog doesn’t see his shadow (or, for fellow cold weather fans, if he does). Or maybe you can flip a crepe for fair weather in the coming year.

Have you ever celebrated La Chandeleur? Do you know any French people who do? Feel free to share in the comments.

5 thoughts on “All about La Chandeleur, a day of superstition and crepes”