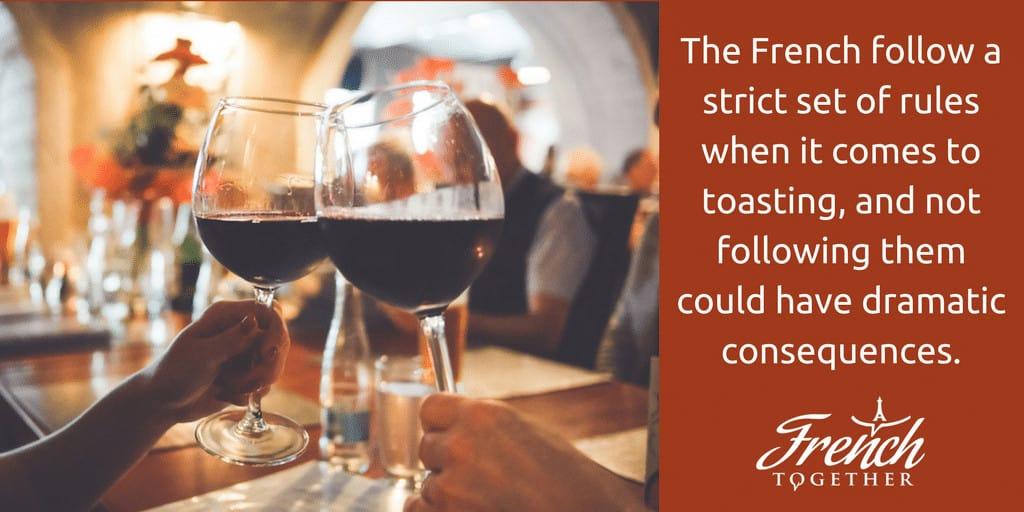 7 years of bad luck (or bad sex depending on who you ask).

That’s what anyone who doesn’t respect the subtle rules of the French toasting ritual should expect.

That’s at least what the tradition says.

You need to use the right words with the right people but also follow a precise set of rules that were created in the Middle Ages so people could make sure their drink didn’t contain poison (such a lovely period).

Table of Contents
Goodbye cheers, hello health!
Santé
Respect these rules when toasting. Or else…
Once upon a time in the kingdom of France

First of all, and quite logically, French people don’t say “cheers” when toasting.

Instead, they wish good health to the person they’re drinking with.

That’s at least how it is nowadays because wishing good health  used to mean something along the lines of “I hope you didn’t poison me because if you did, I will too”.

If you don’t know how formal or informal you should be, à votre santé is the “cheers” for you.

You can safely use it with your boss, a friend or even a stranger in a bar.

Safe doesn’t mean natural though and you’ll sound more French if you use the more relaxed à ta santé with friends and people you know well.

Both phrases have the same meaning, the only difference is the level of politeness.

After someone said “à votre santé” (to your health), you can answer à la vôtre or “à la tienne” (to yours).

Again, these phrases both have the same meaning and the difference lies in the level of politeness.

You can use “à la vôtre” with people you don’t know well while à la tienne is better kept for friends, family members and people you’re close to.

The French love to drop words (and letters) when they speak and it’s common to hear santé (health).

This expression originated in China where 請請 was used to say “please please” as a way of inviting people to drink.

It was then introduced in France by soldiers back from the Second Opium War and has been extremely popular ever since.

You can use tchin tchin with your friends and everyone you’re on a “tu” basis with as a fun replacement of the more traditional “à ta santé” and “à votre santé”.

Respect these rules when toasting. Or else…

Knowing how to say “cheers” in French is easy.

Following the precise ritual that is toasting in French, not so much.

You see, the French follow a strict set of rules when it comes to toasting, and not following them could have dramatic consequences.

Before talking about these terrifying consequences, let’s look at these crazy rules:

Wait, what if I do cross my glass with someone else or don’t look at the person in the eyes?

Once upon a time in the kingdom of France

These traditions may seem crazy, however, they did make sense when they originated.

It’s said that people used to clink their glasses to exchange a part of the liquid contained in them and make sure none of the glasses contained poison.

Looking at the person you were toasting with in the eyes was a way to make sure nobody knew whether the content of the glasses got mixed.

Nowadays, people (usually) don’t fear poison in their glasses but the tradition remains and following the rules is one of the best ways to show how French you are.

Have you ever drunk with French people? How did it go? Share your story in the comments below!