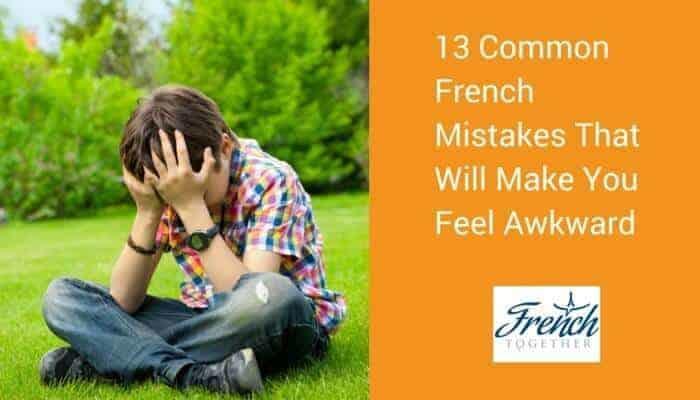 To avoid (hilarious) mistakes, here are 13 sentences and words you should never say in French. Unless you really want to feel awkward of course.

Congratulating your friends is a good idea, but you need to be careful  when you do it in French.

“Tu es bonne”, said to a girl will often be interpreted as “you are good…in bed”, and that’s the most polite interpretation.

So if you ever want to congratulate a female friend, don’t forget to clearly explain what your friend is good at.

Or simply avoid this sentence and use the safer “tu es doué(e)” (you are gifted).

Wow, your sister is good

Check out Bien vs Bon: Which One Should You Use? to learn more about the different ways to say “good” in French.

You may want to avoid asking for a jerk in the restaurant.

Hello sir, do I serve you duck or chicken?

You certainly think that “baiser” means “to kiss”, and that using that word would be really cute.

Check out this article to learn the dos and don’ts of French greetings.

This is one of many cases where the verb “to be” in English becomes “to have” in French.

Then you may be tempted to ask for food “sans préservatifs” thinking you’re using one of many French words whose meaning is identical in French and English.

Unfortunately for you, “préservatif” is a faux-ami, one of several words whose meaning is radically different in French and in English despite being written almost the same way.

Excuse me, does this dish contain condoms?

No, but it contains preservatives

“Chat” (cat) is one of the first words students usually learn in French.

What your French course may not have mentioned though is that the female version, “chatte” has two meanings.

To avoid confusion, don’t use this word!

This is a magical word.

As the video below demonstrates, you can use it for absolutely everything, but certainly not with everyone.

Used alone, it means you are tired, frustrated or angry.

Used to talk about someone, it means “whore”.

Whatever meaning you choose, remember that this word is extremely informal!

If you ever go on American TV, using “putain” could cause you problems. Ask Jean Dujardin what he thinks about it!

What do you think about this movie? It sucks!

In French “sucer” (to suck) mainly has a sexual meaning.

Next time you want to say something sucks, say “c’est nul” (it’s lame) instead.

You just ate in a wonderful French restaurant rue Mouffetard (a lovely street in the center of Paris) and your stomach is about to explode.

Proud of yourself, you look at your French friend and say “Je suis plein(e)” (I am full).

Full? Full of what?

Instead you may want to use:

Imagine that your French conversation partner  just asked you if you enjoyed your visit of Paris.

After opening a dictionary, you found that “jouir” means “to enjoy”.

So you proudly answer your friend “oui j’ai bien joui”.

You actually just said “yes I had an orgasm”.

“Jouir” only means “to enjoy” in a formal context. Most of the time, French people use it to say they had an orgasm, not to say they enjoyed something.

I once had lunch with a bunch of Korean and French friends. At some point, noodles fell on one of the Korean girls’ t-shirt and she yelled “JE SUIS COCHONNE”.

She wanted to say she ate in a dirty way. She didn’t know that “cochonne” often has an entirely different meaning…

If you open a French dictionary, you will read that “cochonne” is the feminine form of “cochon” (pig) and that it also means that you’re a messy eater if used as an adjective (it’s rarely used as such though).

What your dictionary doesn’t tell you is that it has a more common and much more embarrassing meaning. For most French people (especially young ones),  “cochonne” means “someone who loves sex”.

So when my friend yelled ‘je suis cochonne”, people didn’t understand “I ate in a dirty way”, but “I love sex”.

When French Together reader Candy said to her friend “j’ai envie de toi”, she meant she envied her friend.

What Candy didn’t know was that “j’ai envie de toi” doesn’t mean “I envy you”, but “i want to sleep with you”. This is what you say to your lover, not to your friend.

Next time you thank someone, make sure you say “merci beaucoup” and not “merci beau cul”. You will avoid an awkward situation.

Have you ever made funny mistakes in French? Share your stories in the comments below!