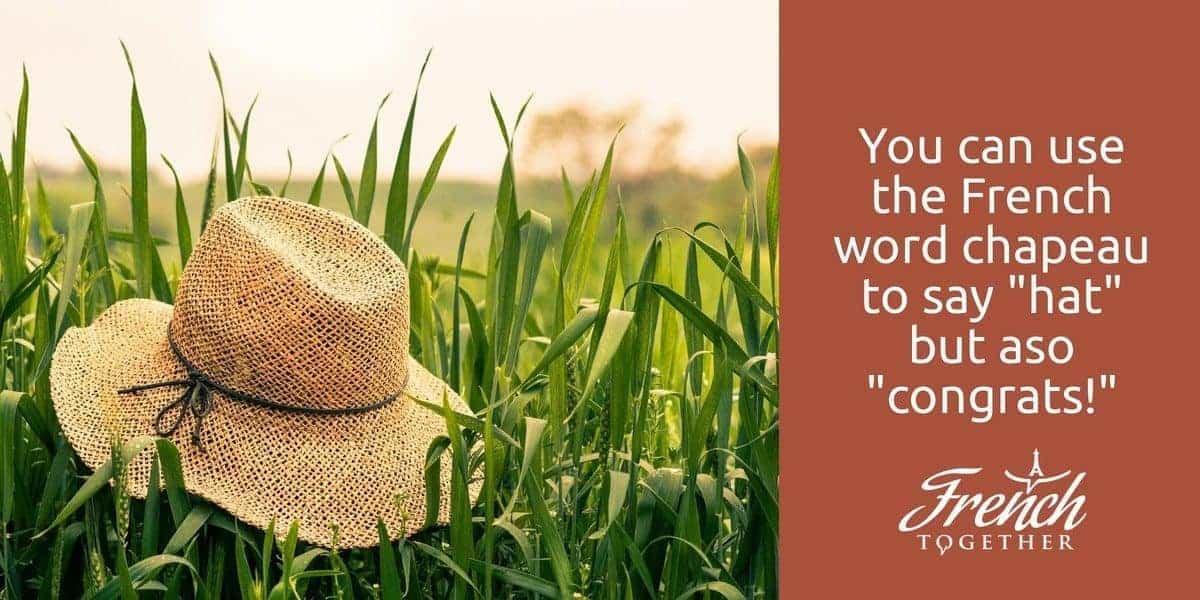 During my year studying abroad in Paris, I had a course on French films that was a real challenge.

When I got back my final essay, the professor looked at me with a smile.  Chapeau, he said. My face must have looked blank. Why had he said “Hat” to me?  I wracked my brain – was there some kind of inside joke, or was he referencing something I had written in my essay?

It turns out he was congratulating me.

While there is one common way you’ll usually hear people say “Congratulations” in French, there are some other options, naturally.

Let’s take a look at how to say “Congratulations” in French, from the conventional, to the unexpected (at least to us foreign speakers).

Félicitations: The most common way to say “Congratulations” in French

The most common way to say “Congratulations” in French is simply, félicitations.

You can use it with people you’re close to, and in more formal settings, too.

Some common expressions with félicitations

As an expression of congratulations, félicitations works perfectly fin e on its own, but if you want to change things up a little, you can use it in a complete sentence or add an adjective.  Just remember, it’s a plural, feminine noun, so always be sure to agree whatever you might add to it.

Also keep in mind that the following common phrases tend to be slightly more formal than saying félicitations alone, so if you’re talking to someone close to you, you may want to forgo them and keep it simple:

How to use félicitations as a verb or adjective

You may also use or see felicitations as another form of speech.

Note also: This expression is most commonly used with te or vous, but you could add just about any reflexive pronoun here, even me!  For example, Je me félicite de ma soupe – c’est une vraie réussite ! (I have to congratulate myself on my soup – it’s a real success!).

More rarely, félicitations can also be used in its adjective form, félicitation(e)(s). In this case, because it has to agree with the noun(s) it’s describing, it can be singular or plural. For example : Je lui ai écrit un message de félicitation. (I wrote him a message of congratulations).

How do you say congrats in French?

You may find some structural similarities with félicitations and its equivalent in English and in other languages you know, but one thing that may be different is that, unlike languages like English (congratulations = congrats), French does not have an abbreviated form of félicitations.

Whether you’re saying it to the President or to your friend, félicitations is it.

Other ways to say “Congratulations” in French

Of course, félicitations isn’t the only way to congratulate someone in French. Here are a few other common expressions you’ll see.

You can use it in a situation where someone made a judicious choice or showed a good use of strategy.

Bon travail is another expression with an exact English equivalent: Good work. A French teacher might have said this to you before!

Bravo is not originally a French word and comes from the italian word for “brave” or “bold.”

Despite its italian origin, Bravo is another common way to congratulate people in French. It’s on the informal side, so don’t use it with your boss or the President (especially Macron).

The initial confusion I felt when I heard my French professor say Chapeau to me has long been replaced by nothing but love.

J’adore (in the over-the-top sense that this expression has for the French) Chapeau as a way to say “Congratulations”!  It’s one of my favorite French expressions.

Essentially, it’s the equivalent of “Hats off,” which comes from a bygone era when gentlemen wore hats and would tip or take them off as a sign of respect or appreciation (among other reasons they’d take them off, of course).

Here’s an example of how to use it: Elle a enfin fait la paix avec sa belle-mère.  Chapeau ! (She finally made peace with her mother-in-law. Hats off!)

This a variant of chapeau (think of some old-timey fellow dramatically taking off his hat in a sweeping gesture, bringing it low, towards his thigh).

But Chapeau is the one closest to my heart. The reason I love it is that the French decided to forgo anything else – it’s simply “Hat,” as if we all should know what that means, and in another time, most French people probably did.

Like many of the expressions on this list, you can use it on its own or with pour, followed by the thing you’re congratulating the person on.

Example: Tous mes compliments pour ton interpretation de Phèdre. (My sincerest congratulations for your performance of the role of Phèdre.)

Because of its formality, I would advise being careful how you use this expression.  If you say it to a friend or close family member, it may seem like you’re being cold or aren’t truly happy for them.

Are you talking to me? French congratulations said directly to someone or about someone

As in many languages, most of these expressions can either be said or written directly to the person/people you’re congratulating, or used when talking about them and their accomplishments.

So for example, you could say or write something like Mamoudou Gassama a sauvé un enfant qui a failli tomber du 4e étage d’un immeuble. Chapeau! (Mamoudou Gassama saved a child who almost fell from the 4th floor of a building. Hats off!) or Bravo, Monsieur Gassama !

Sometimes, one phrase or word isn’t enough (no, not even my beloved Chapeau).  You may be writing a card or email, or simply engaged in a longer conversation with the person you’re congratulating, and want to express just how happy you are for them.

The good news is, there is no exact formula for this, so whether you have only a basic level of French or you’re practically fluent, you can just add whatever you know how to express.

A few common phrases you’ll see after an initial expression of congratulations are:

Obviously, this would be used with a close friend or family member (or multiple people from these categories), including a kid/kids.

If you want more situation-specific phrases, French magazine L’Obs has a really useful webpage that lists some ideas for particular occasions.

Keep in mind that most of these are for written messages, not necessarily intended for conversation, although the simpler ones would usually work in conversations as well.

A few cultural differences you need to be aware of

In general, French people celebrate and feel victorious about the things people in most cultures do: success at work or school; achieving a personal goal; doing a good job at something: getting engaged or married; finding out you’re going to have a child – and having a child; reaching a milestone (for example, buying a house, learning to ride a bike, learning how to use the toilet (shout out to all of my fellow parents of toddlers reading this); and so on.

The only major difference you may notice is that, depending on your native culture, the French are usually fairly toned down.

For example, as not only an American, but an Italian-American, when I congratulate someone, it’s usually going to be said in a really happy, enthusiastic way. It may be accompanied by an enthusiastic little cheer or scream. There may be a hug.

The French generally don’t display emotion this way – to them, it seems insincere. You’re more likely to hear them congratulate someone in perhaps in a slightly raised voice if the news is particularly amazing or surprising, but otherwise fairly calmly. There may be a handshake in some professional contexts, or a bise (kisses on the cheek) in familial or friendly ones.

Should you congratulate a French person the French way?

I’m all about accepting our differences, but if there’s a risk that you might be misunderstood, it’s probably best to try to behave the same way.

For example, when I congratulate one of my close French friends or French family members, I have no problem being my over-the-top American self. But if I want to congratulate a client or a parent at my son’s school, I would stick with the more restrained French way.

That being said, I also believe that if the situation truly is joyful, you’re probably okay however you go about it.

Be open to being laughed at or looked at in puzzlement if you go too over the top, though (that’s definitely happened to me).

So that’s what you need to know about saying “Congratulations” in French. Do you feel like a pro now? If so, Chapeau!