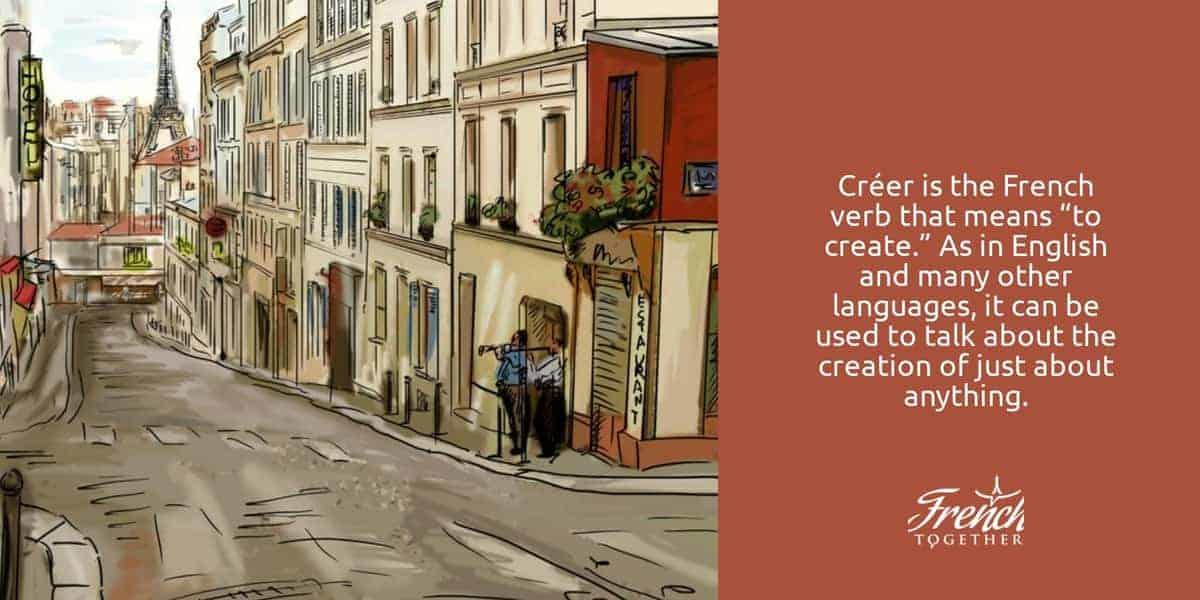 At a glance, the French verb créer looks pretty creative, with its little accent like a beret jauntily perched on an artist’s head.  This may make it seem complex and complicated. But while créer can be used to talk about complex projects and works of art, it’s actually a pretty easygoing verb!

Let’s get to know créer  a little better.

Table of Contents
What does créer mean?
How do you conjugate créer?
Why doesn’t créer’s accent move or disappear when it’s conjugated?
Some common phrases with créer
French words related to créer
France and creativity

What does créer mean?

Créer is the French verb that means “to create.” As in English and many other languages, it can be used to talk about the creation of just about anything, from a masterpiece, to a monster; from a problem, to a solution.

How do you conjugate créer?

As I’ve said, créer may look complicated, but it’s not as bad as you think. In fact, créer is a regular -er verb.

Plus, since créer’s compound tenses are conjugated with avoir, you don’t have to automatically agree its past participle with its subject every time you use it.

But like an abstract painting, créer might take some getting used to. In some tenses, accents and e’s are all over the place!

Here’s how créer looks in its most common conjugations.

Why doesn’t créer’s accent move or disappear when it’s conjugated?

Some French verbs take on or lose accents when they’re being conjugated – for example, acheter ,a verb whose accent placement (or lack thereof) always trips me up, personally. But créer’s accent never changes place. Another accent might be added to it, but you’ll always have that first é.

This is because the accent is there for pronunciation reasons, and the verb’s root is always pronounced the same way, regardless of tense, etc.

Sometimes, this unmovable accent makes certain forms of créer look a little crazy. But if you’re only going by the conjugation table above, you haven’t seen anything yet!

In a situation where the past participle of créer has to agree with a feminine word, it becomes…drumroll please… créée! Seriously.

Let’s look at why. The first é is the accented one that’s always included in the verb créer.

The second é is the past participle ending for a regular -er verb.

The e at the end shows that this past participle in particular is agreeing with a feminine word.

Here’s an example: Jacques est fier de la toile qu’il a créée. (Jacques is proud of the painting that he has created.)

Some common phrases with créer

Although it seems like a verb with a fairly specific definition, créer is actually quite broad. You can create works of art, jobs, businesses, problems – all sorts of things and ideas.

The most common phrases that use créer show this diversity. These include:

la/une création – the process of creation; a creation.

créatif/créative– creative. This can be either an adjective, or a noun (someone who is creative).  Example: Sandra est une vraie créative.(Sandra is a really creative person.).

The noun form can also be used as a current business buzzword, as well, just like in English. That being said, I hear this word used far more often as an adjective than a noun. It seems to me that you’re far more likely to hear the example sentence as: Sandra est très créative.(Sandra is very creative.).

créateur/créatrice – creator. This word is used with a sense of pride and craftsmanship. For example, you’ll often hear the phrase créateur de mode– literally a “fashion creator”, rather than simply a designer.

Note that, as in English, words like créer, creation, and créateur/créatrice can also be used in a religious context. For example : Selon le Bible, le dieu, notre créateur, a créé le monde en sept jours. (According to the Bible, God, our Creator, created the world in seven days).

Second note: That example phrase includes too many “creates” for the French taste – the French notoriously hate any hint of repetition in (non-literary/poetic) writing. I just wanted to show how these different forms of créer could be used.

France has long had a reputation as a “creative” country. When most people think about French culture, they probably imagine artists in some way, not to mention people in other creative roles, like chefs and fashion designers. And they’re not wrong. Countless movements and works of art, gastronomy, fashion, literature, and cinema that were created in France are famous around the world.

Those are just a few of the creative domains the French excel in – and they’re aware of it! In a recent government campaign called Creative France, targeted towards businesses and overseas investors, the arts are mentioned, but so are innovations in areas like technology, science, and consumer goods.

In general, life in France isn’t about strolling along beautiful streets and falling in love with starving artists living la vie de bohème (unfortunately). Still, creativity is regularly celebrated here, and not just in major cities. Even the village where my husband grew up is proud of its medieval church and its history. Go a little further, and the nearest city, while small, boasts a few museums and archaeological sites, as well as a well-stocked library and a theater and cinema.

Omnipresent and generally accessible cultural resources are a typical part of life in France. That doesn’t mean that every French person appreciates culture and the arts, but I find most French people to be curious and open-minded, and open to enjoying cultural experiences, rather than being intimidated or expecting to be bored by them.

There are some specific days that celebrate culture and creativity in France (and in all of Europe in some cases), like the Nuit européenne des musées, a night in May when many museums are open late and usually for free, or la Fête de la musique (June 21) a day when anyone can go outside and play an instrument or sing, and there’s a huge range of concerts and performances to enjoy – both professional, and amateur. There are also the Journées européennes du patrimoine, a weekend in September when museums, monuments, and usually private sites throughout Europe are open to the public for free. Nuit Blanche, an all-night arts festival in early October that features installations and activities throughout Paris, is a fun creative moment in the City of Light. And let’s not forget major events on the international cultural calendar like Paris Fashion Week. In addition to these events, individual regions, towns, cities, and villages all may have festivals promoting local culture and the arts.

That said, life in France isn’t a constant barrage of high-end culture and cutting-edge innovation. We have reality TV, crude comedy, and simply, everyday life stuff going on, as well. Not to mention the French love of politics, which keeps things pretty serious sometimes. But overall, there is an appreciation for culture, and as for that idea of including business, science, tech, and other areas under the creative umbrella, I think French people do inherently appreciate anything that’s done well and has a sort of harmony to it, in any domain.

On that note, I’ll end this exploration of the verb créer with a link to this very thorough list of things that have been created or invented in France over the course of its history. You’ll find artistic and architectural movements, types of food and cuisine, fashion and tech innovations, and world-changing inventions, among other things!

I hope you don’t just find this list impressive, but inspiring.

Et toi, as-tu déjà créé quelque chose dont tu es fier/fière? (And what about you – have you ever created something you’re proud of?) If so, feel free to share in the comments!