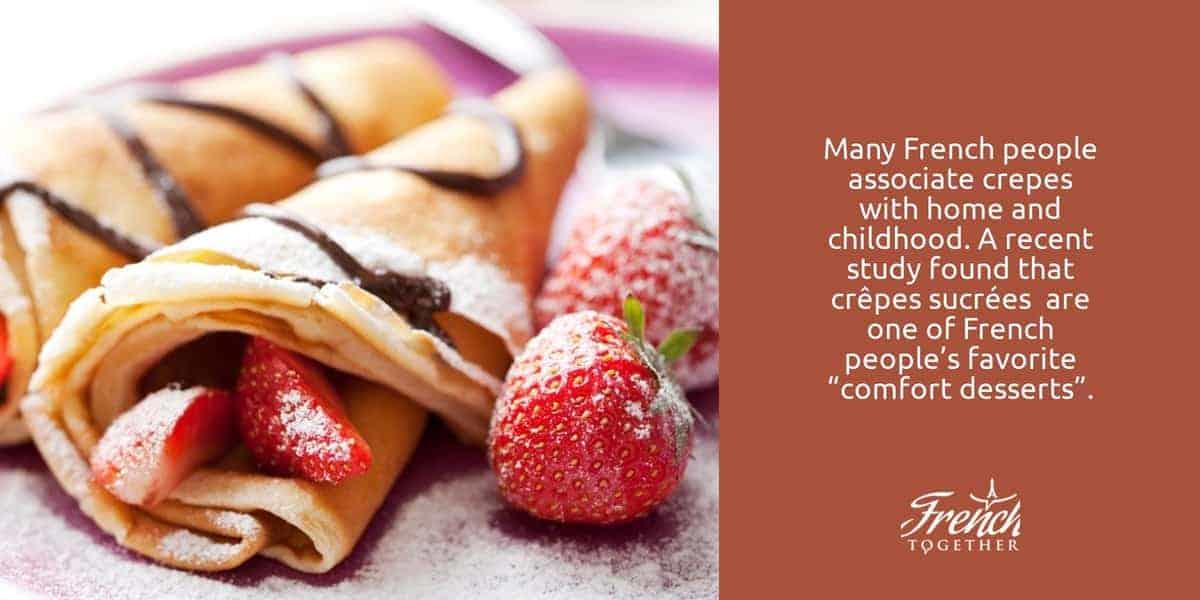 Crepes are one of the foods that people associate with France. And they’re not wrong. There are about 4,000 crêperies (crepe restaurants or crepe stands) in France today, and the yummy treats have a spot on just about any list of the French’s favorite desserts.

But there’s more to crepes than their popular and tasty nature. Like most foods in France, they’re just as rich in tradition as they are in deliciousness. Want to learn what’s behind French crepes?  Let’s dig in!

How do you pronounce crêpe?

Before you read on, it’s important to make sure you’re “hearing” the word crêpes correctly in your head. I say this because, whether it’s uttered by foreigners, tourists, or even expats living in French-speaking countries, crêpe may be the most consistently incorrectly pronounced French word I’ve come across.

I’m not pointing this out to be mean, but because if you pronounce crêpe the wrong way, it’s very likely that a native French speaker will have no idea what you’re saying. And if that native French speaker is someone who works at a crêperie, this may make it hard for you to get your crepe fix in a timely fashion.

You can listen to our audio recording of the word crêpe and repeat it for practice. In general, keep in mind that in French, crêpe rhymes with “pep”. Not “grape”, not “app”.

What, exactly, is a crepe?

In case you’re new to the crepe game, French crepes are basically pancakes. Only, unlike American pancakes, they’re not fluffy and thick, but thin and moist. To me, they’ve always tasted and felt like a hybrid of a pancake, an omelet, and pita bread.

French people don’t eat crepes plain. Instead, they fill or top them with just about anything you can imagine. In a recent survey, the crêpe au sucre (crepe covered with melted butter and sprinkled with granulated sugar) was named as French people’s favorite way to enjoy a crepe. This is followed by crepes filled with different kinds of jam, and with spreads like Nutella.

Among the tourists and expats I’ve known, though, it’s another story. They seem to prefer une crêpe au Nutella (Nutella crepe), sometimes with banana slices added in for good measure. Not that I blame them!

You might have heard of another kind of crepe dessert, crepes suzette. This is an elaborate dessert that was first prepared at the turn of the 19th century, and involves covering a crepe in caramelized sugar, then adding other ingredients, including orange juice or an orange liqueur and serving it flambée. Although crepes suzette do exist, they aren’t very popular in France, probably because they’re hard to make at a crepe stand or at home.  That said, if you feel up to it, you can find crepe suzette recipes by doing a search online.

Although sweet crepes (crêpes sucrées) are the most popular, they’re not the only kind of French crepe.

The two kinds of French crêpes

Crêpes sucrées and crêpes salées (galettes) differ in some key ways, starting with their batter (pâte). Crêpes sucrées are usually made with wheat flour (farine de froment).  Galettes, on the other hand, are often made with buckwheat (blé noir or sarrasin), especially if they’re supposed to be traditional Brittany crepes (galettes bretonnes). Buckwheat gives them a darker appearance and makes them taste much less sweet.

I talked about crêpes sucrées in the previous section of this article, but you might be wondering what the deal is with galettes. Galettes aren’t less sweet simply because of their batter: they’re actually filled or topped with savory ingredients. Popular choices include eggs, emmental (Swiss) or goat cheese, ham, and mushrooms  – but you can put just about anything into a galette. I’ve had some with tuna and eggs, or eggs and beef. At our favorite crêperie, my husband always orders une crêpe au chèvre et chorizo (a crepe filled with goat cheese and spicy sausage). I’ve even heard of galettes topped with ratatouille.

How are French crepes eaten?

There are two ways to eat French crepes.

If you get them from a crepe stand, they’ll usually be folded up into a cone-like shape, with the ingredients inside.

If, on the other hand, you make them at home or order them at a sit-down restaurant, you’ll usually have them open or with the sides only slightly folded, with whatever you’ve chosen to go with them located in the center.

One word of advice: whether sucrée or salée, takeaway crepes are a tasty treat, but they can get very messy! In France, it’s not typical to get a lot of napkins when you order something to go, so try to ask for a few extra ones, or be sure you have some tissues handy.

Where were French crepes first made?

Something like crepes were probably made early on in history, but as their name suggests, galettes bretonnes ( buckwheat crepes) originated in the French region of Bretagne (called Brittany in English) in the Middle Ages. According to at least one source, it all started when a Breton woman accidentally dropped porridge onto her stovetop, creating what turned out to be a flat, tasty cake.

Today, crepes are enjoyed throughout France (and some version of crepes or pancakes are enjoyed in many countries around the world), but ask just about any French person and they still remember that original tie to Bretagne.

Because of this, galettes  are often paired with cidre (alcoholic apple cider), an iconic drink from that region.

When do French people eat crepes?

On this day, it’s said that if you hold a coin in one hand while using the other, your dominant hand, to successfully flip a crepe in a frying pan, you’ll have a prosperous year (others say a year of good weather). According to a recent survey, 90% of French people eat crepes on February 2 – and probably a lot of them do it at home, where they make them and flip them, themselves.

This being said, la Chandeleur isn’t some omnipresent tradition, although it is well-known. Here in Paris, I know few people, if anyone, who specifically set aside this day to eat crepes. If you’ve experienced la Chandeleur more intensely in Paris or anywhere else in France, please share that in the comments – I’d love to hear about your crepe encounters.

Whether or not French people flip crepes on February 2, it’s far from the only time they eat them. French people might enjoy a galette for lunch or dinner, or a crêpe sucrée as a treat or for dessert (crepes aren’t usually part of a typical French breakfast).

How do French people feel about crepes?

Many French people associate crepes with home and childhood. A recent study found that crêpes sucrées  are one of French people’s favorite “comfort desserts”.  This is because crepes are easy to make at home, and fun, too, since you have to flip them. Many parents and grandparents make them with their children/grandchildren.

Can I make French crepes at home?

We tend to think of French pastries as luxury foods that are sweet examples of haute cuisine, so it may seem like making a good crepe is out of reach for us non-French people. But that’s not true!

There are three traditional ways to prepare crepes. The crêpes sucrées and galettes you’ll find at crêperies tend to use specific techniques and ingredients – there’s even a school for people who want to open crêperies.

These crepes are usually prepared on a special sort of hot plate, called a billig (a Breton word). The batter is spread and smoothed with a tool that looks like a sort of miniature broom. You can watch a man at a crêperie stand make a crêpe sucrée in the video below.

Making crepes at home is a lot simpler. All you need is eggs, flour, milk, sugar, salt, butter, a stove, and a frying pan. Here’s a French recipe for basic homemade crepes.

Where can I find French crepe recipes?

If you’re looking for more advanced-level recipes, don’t worry. There’s a staggering amount of French crepe recipes online. Most of them are basically the same, but you can find some interesting variations, including many that call for adding beer to the batter.

You can also find recipes like this one, which requires buckwheat (blé noir or sarrasin) flour.

How to flip a crepe

Of course, no matter how easy it is to cook a crepe, flipping it may be another story. Even the French chef in the following video says he prefers to avoid doing it!

Still, faire sauter une crêpe is far from impossible — 76% of French people claim they can do it. Plus, it can bring you a prosperous year ahead if you do it on le Chandeleur.

Essentially, the trick is to make sure that your crepe won’t stick to the pan, so make sure you lightly cover the pan with butter or vegetable oil before you start making your crepes. And of course, make sure the crepe is cooked enough. It should be slightly golden brown and the edges should look slightly flaky. Here’s a video of a French mom helping her little girl flip a crepe.

Still, faire sauter une crêpe n’est pas toujours facile (flipping a crepe isn’t always easy), as you can see in the Petit Ours Brun cartoon below. Typical of this iconic series, it shows a traditional slice of French life: what probably happens in a lot of French homes the first time someone tries to make crepes.

Now you’re pretty much a French crêpes expert, so why not eat one (or several ) to celebrate? Bon appétit!

Oh – and if you have a favorite French crepe, feel free to tell us in the comments section!