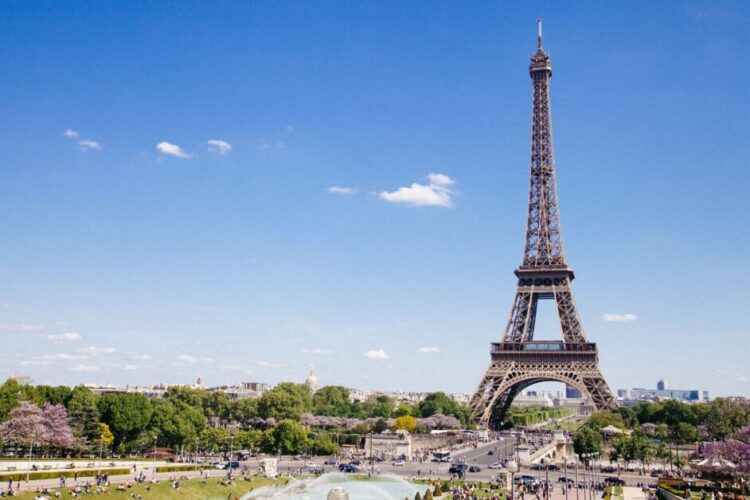 The Eiffel Tower –  la Tour Eiffel in French — is one of the world’s most famous, recognizable landmarks. But despite its fame, there are a few things you may not know about la dame de fer.

In honor of its reopening, here are twelve fascinating facts about the Eiffel Tower:

1. The Tower was an intentional tourist attraction.

Many monuments in Paris were built for other purposes and have become tourist draws, but the Eiffel Tower was specifically constructed to be a sight worth seeing and visiting. Its construction started in January 1887 and it was completed in March 31, 1889, just in time to be the star attraction of the 1889 Exposition Universelle (World’s Fair).

The Tower’s popularity has endured: It welcomes nearly 7 million visitors a year (in non-pandemic times)!

Want to join these visitors? You will find the famous Eiffel Tower on the Champ de Mars at 5 Avenue Anatole France in Paris’ 7th arrondissement.

2. The Eiffel Tower wasn’t meant to be permanent.

Like many structures made for the Exposition Universelle, the Eiffel Tower was intended to be dismantled at some point after the event ended.

This was at least some consolation to the many Parisian artists and aesthetes who didn’t like the Tower – among them Guy de Maupassant and Charles Garnier, architect of Paris’s stunning main opera house, often called the Palais Garnier.

But by the end of the Exposition Universelle, most people had really taken a liking to it. Plus, its impressive height (at the time, it was the tallest building in the world) made it an excellent radio tower.

Fortunately, the Eiffel Tower could last longer than originally planned, thanks to engineering genius and the fact that….

3. The Eiffel Tower is made of puddle iron.

That’s why la dame de fer (the Iron Lady) is a common French nickname for the Tower. As the Tower’s official site explains, puddling is a process that purifies and strengthens iron.

4. The Eiffel Tower and Statue of Liberty are connected.

Gustave Eiffel’s engineering firm also built the metal framework inside the Statue of Liberty, which was constructed in Paris and sent as a gift from France to the United States, its longtime ally, in 1886, in honor of the 100 years of the US Constitution.

5. Eiffel had an apartment at the top of the Tower.

Eiffel had a private apartment built at the top of the Tower, although it was really more of an office and place to receive prestigious visitors, like Thomas Edison. In his honor, the office has been preserved  and can be visited. The Eiffel Tower’s official website features a few images of it (including the wax figures of Eiffel, his daughter, and Thomas Edison that are its current permanent residents).

6. The Eiffel Tower has changed color – and it will again.

Originally, the Eiffel Tower was painted reddish brown. Due to weather conditions, the pigment erodes and every seven years the Tower needs to be repainted. This has lead to some creative forays into color, including shades of yellow. The current color, sometimes called “Eiffel Tower brown”, has been used since the 1950’s. But according to a number of sources, the Tower will be repainted in honor of the 2024 Olympics (which will be held in Paris), this time to a yellow-brown.

7. The Tower was involved in a World War I battle.

In 1914, a radio transmitter in the Eiffel Tower jammed the Germans’ radio communications, helping the Allies win the First Battle of the Marne.

8. There’s writing on the Eiffel Tower.

If you look closely, above the lovely lace-like metal arches that rise up from its base, there are names inscribed on the Eiffel Tower. These are the names of seventy-two great French engineers, scientists, and mathematicians.

9. The Eiffel Tower is still the tallest structure in Paris.

When it was built, the Eiffel Tower was the tallest man-made structure in the world. It originally stood at 1024 feet (312.12 meters), and has subsequently grown a bit, due to an altered radio tower.

It only lost the title of “tallest building” in 1930, with the completion of construction on the Empire State Building. Since then, it’s been surpassed by many other buildings, as well.

Currently measuring 1063 feet high (324 meters), the Eiffel Tower remains the tallest tower in the world not built on a platform. It’s also the tallest structure in Paris and the second-tallest in France.

After nightfall and until 1am, every hour on the hour, the Eiffel Tower sparkles for five minutes. This is due to an installation of 20,000 lamps that cover it. Fortunately, these lamps are low in energy consumption.

Unfortunately, while the Tower itself is in the public domain under French law, rights to the light installation belong to its creator, Pierre Bideau, who set up the sparkle in 1985. This means that media outlets, websites (including ours!), etc., aren’t allowed to share photos or films of the Tower when it’s sparkling, unless given express permission.

It’s a shame that this beautiful sight can’t be shared freely. So if you come to Paris, plan to be watching the Tower at the start of a nighttime hour. You can also see the Tower sparkling via YouTube videos that apparently have been granted permission to show it. One of my favorites is this lovely view; you can catch the Tower turn from illuminated to sparkling at the 11:40 minute mark.

You may also spot the sparkling Eiffel Tower in some movies and TV shows that take place in Paris.

11. You can’t take the stairs all the way to the top of the Eiffel Tower.

If you’re the energetic sort, you may forgo a ride in the Tower’s lower lifts and instead take the stairs to the second floor. From there, though, you’ll have to switch to an elevator- the staircase that goes all the way to the top isn’t open to the public.

12. The Eiffel Tower took about two years to build.

Considering it was the tallest man-made structure in the world at the time of its construction and considering the fact that technology and tools were more limited in 1887 than they are today, I think it’s pretty impressive that the Eiffel Tower took only two years, two months, and five days to build, don’t you?

Where can I learn more about the Eiffel Tower?

I hope you’ve enjoyed these Eiffel Tower facts. If you’d like to learn more, the Tower’s official website features lots of wonderful information and resources that are also a great way to vicariously visit.  You can also watch this short English-language documentary to get a good foundation of knowledge about the iconic monument. If that whets your appetite for knowledge, there are many other Eiffel Tower documentaries online as well, in both English and French.

Do you want to visit the Eiffel Tower, or have you already been? Feel free to share in the comments!

1 thought on “12 terrific facts about the Eiffel Tower”