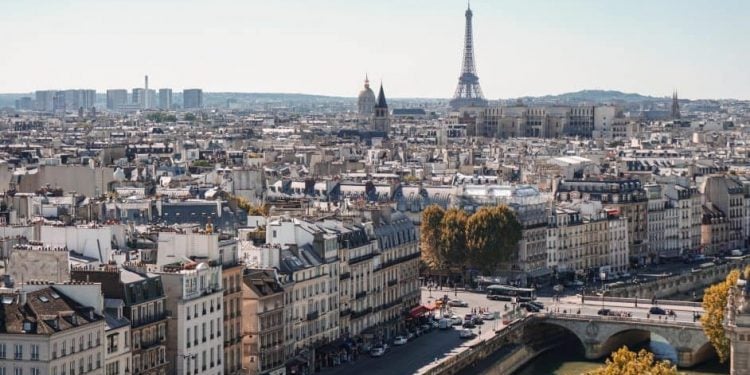 On October 2, 2020, Emily in Paris was released on Netflix. The series was shot on location here and many cast members are French. But the reality of life in the City of Light is nowhere to be found. Even people who have never been to Paris have called the show out for its numerous inaccuracies.

I won’t go into detail here, but a simple online search will lead you to a bevy of lists (including this one by a French person) of said inaccuracies.

That said, I’m not writing this post because I hate Emily in Paris. Realistic or not, the series has let people around the globe dream and escape a little. That’s one of the things I love best about fiction, especially now, when real life is pretty scary and actually traveling to Paris (or just about anywhere) is impossible for most of the world’s population.

But if you’re looking for a more realistic portrayal of life in modern-day Paris, or if you loved Emily in Paris and want to learn more about la vie quotidienne in the City of Light, here are some films and series you should check out.

Table of Contents
How did I choose the films and series on this list?
5 shows like Emily in Paris but more realistic
Where can I watch these movies and films?
Is there a right way to portray Paris?

How did I choose the films and series on this list?

In the years since motion pictures were invented (which, coincidentally, was in Paris), countless films, TV show episodes, and entire TV series have been shot in the City of Light.

But since we’re using Emily in Paris as a reference, our list only includes films or shows that portray Paris in the last twenty-or-so years and are somewhat similar to Emily in Paris.

I’ve also tried to choose shows and movies that are at least somewhat easy to find. This means there are no particularly obscure titles.

Most importantly, with one notable exception, all of these movies or shows feature Paris in a very present way. Although the focus may not be specifically on the city itself, they give us glimpses of the landscape as well as little details of everyday life here.

So, with that in mind, here is our list of….

Elsa’s heart is still broken two years after her boyfriend left her. So her friends come up with a plan: secretly set her up with an escort to get her going again. Misadventures, insights, and possibly even actual love ensue.

Like Emily in Paris, Plan Coeur is a Netflix series set in the modern-day City of Light. One striking difference is that it’s made by French people, many of whom live or have lived in Paris for an extensive period of time. Although the city isn’t a major presence on its own, the characters are constantly interacting with it – for instance, sitting at real-life café terraces in different Parisian neighborhoods and walking down streets of often lesser-known areas like the more working class/bohemian east.

One of the few things that the show isn’t realistic about is the size of the characters’ apartments, a detail that show creator Noémie Saglio has chalked up to Netflix’s request for appealing interiors. Aside from that, though, whenever I watch an episode of this series, it feels pretty legit.

This movie tells the story of Mathias, a fifty-something American who inherits a huge, gorgeous apartment in Paris when his father dies. The only catch: It’s currently occupied by an elderly woman, with the legal understanding that in exchange for a lower purchase price on the apartment, she gets to stay there and be paid an annuity until her death. This isn’t a wacky plot device, but an actual thing in France.

The movie explores the dynamic between Mathias, the woman occupying the apartment, her daughter, and the city itself. It has a top-notch cast, including Kevin Kline, Kristen Scott Thomas (one of those Anglophone actors the French adore for their nearly impeccable French), Maggie Smith, and rubber-faced French star Dominique Pinon. But what’s kept it from being as popular as you might imagine is, I think, that many of its characters are unlikable, and its tone is pretty uneven.

That said, it shows the kind of Paris that many locals and especially longtime expats will recognize, including sumptuous hôtels particuliers and private gardens, as well as charming antique shops with grouchy owners (practically a Paris institution).

Ely and Lila are two best friends who’ve grown up together in cheap housing in Puteaux, a suburb about ten minutes from Paris by Metro. They’re drawn by the glamor that the near-but-far city represents, and get caught in a tangle of lies in an attempt to fit in and maybe end up there.

As you might have guessed from the plot description, this movie is a bit of an exception on this list. While there are a lot of excellent scenes that show daily life in La Défense, the business sector just outside Paris, as well as Puteaux, a  town located just behind it, we don’t get to see much of Paris itself.

The few scenes that do take place there might as well be anywhere. We visit a luxurious apartment building or two, a few clubs and high-end boutiques, and a pop-up event.  But that’s all that Paris really is for Lila and Ely: a longed-for life of glamor and wealth.

I’ve included this movie on the list for just this reason. Dreaming of coming to Paris and ending up the toast of the town has been a theme of numerous French stories for centuries — not to mention an actual dream of many people. You’ll find this tale, in very different incarnations, in novels by the likes of Balzac and de Maupassant, for instance. Unlike many stories that tackle this theme, though, Tout ce qui brille also includes a lot of humor.

Another reason Tout ce qui brille made this list is that if you think about it, it’s sort of Emily in Paris turned upside-down. Emily is suddenly given easy access to a glamorous life in the City of Light, while Lila and Ely can only dream of that. At the same time, both stories feature humor, a bit of (frequently disastrous) sex and romance, fashion, and parties.

Lots of people love this movie about the very brief reunion of a couple after their whirlwind meeting and romantic day in Vienna, nine years prior. I have to confess that I’ve never watched it or the other two films in the trilogy it’s part of in their entirety. I don’t like the main characters or their earnestness very much. But if I don’t include Before Sunset on this list, I know some readers will feel like something’s missing.

The movie offers a stroll along the city streets (well, the nice-looking ones, anyway), a ride on a bateau- mouche, and more, all while the two protagonists talk.

This definitely represents a certain experience in Paris, and many of us, whether as tourists, students, or full-time residents, have probably experienced it: walking along, so engaged in a conversation that you barely notice the beauty of the city around you.

If you don’t find the concept charming, you can also see it as something that will become a historical artifact. You can really see shopfronts and other sights as they were in Paris in 2004, the year the movie was made. In this way, it reminds me of the Lumière brothers’ (aka, the inventors of movies) footage of Paris in the late 1890’s and early 1900’s, which you can watch on YouTube.

This hit movie follows the adventures of Amélie Poulain, a whimsical young woman who tries to help others around her through kind acts. One day, love comes into her life in a mysterious way.

You may be a bit surprised to find this film on a list of movies and shows that portray Paris in a realistic way. But that’s what I love most about living here. Paris has its drab days, its sordid places, its routine. But in certain moments, the city glows and sings.

I don’t think everyone experiences this. For instance, many French people who had to come to Paris for work would much rather live in the countryside; they rarely, if ever, seem deeply connected to the City of Light. But for those of us who love this city (native Parisians, expats, and tourists included), Amélie is a kind of reality.

And for all the film’s exaggeration and bizarre situations and characters, there are a lot of glimpses of the mundane. It just so happens, of course, that in many cases, even the mundane becomes extraordinary. Take, for example, the way a photo booth, which is a completely ordinary fixture in just about every Metro station (French people always have a lot of paperwork to do and often need standard ID photos to complete them) becomes part of a love story.

Where can I watch these movies and films?

Depending on where you live, many of these series and films are on Netflix or other streaming services. You may also be able to find them for digital download or rental. You can also check your local library for copies on DVD.

If those options don’t work, check out our list of other ways to watch French films and series.

Is there a right way to portray Paris?

It’s a frustrating-yet-magical fact that there is no single, standard, “correct” experience of Paris – or of any place, really. So much of what we live is influenced by what we’ve lived through, right?

Existential thoughts aside, the  movies and series on our list offer different perspectives on life in Paris today. They’re worth watching whether you love Emily in Paris or hate it, or love to hate it – or even if you have no particular opinion at all, and are always game for a glimpse of life here.

After all, as the saying goes, “Paris is always a good idea.”