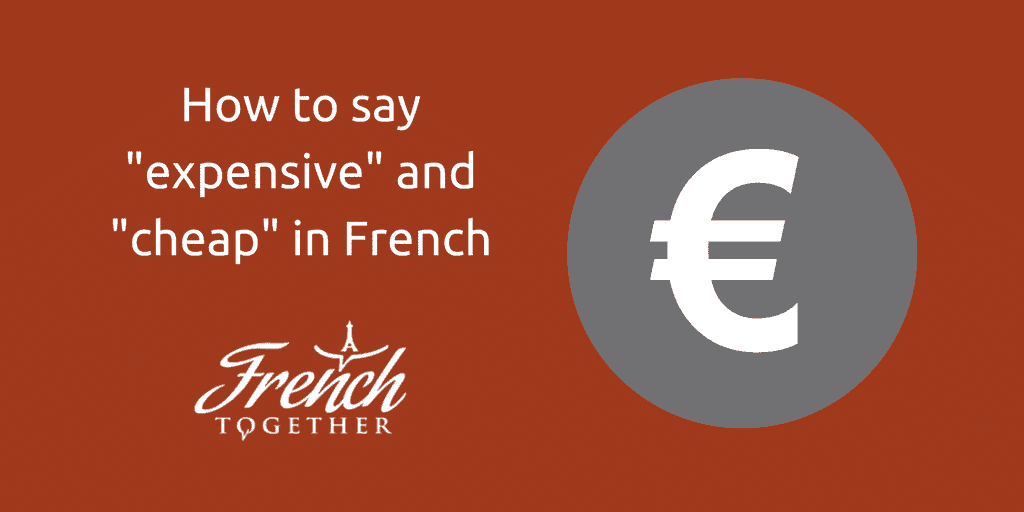 According to the Economist Intelligence Unit’s annual Worldwide Cost of Living survey, Paris is the 8th most expensive city in the world.

But how do you say that in French?

That’s what this article will show you!

How to say expensive in French

This is the most basic way of saying “expensive” in French.

Unlike some other French words for expensive, cher doesn’t have any negative connotation. It doesn’t mean you think something is way too expensive for what it is.

As often in French, you can add an adverb before cher to change its meaning. For example, you could say:

Ce n’est pas donné literally means “it is not given” and is used to say you find something expensive.

You can (and the French often do) shorten it and say c’est pas donné. This shorter version is more common but also less formal.

While “c’est pas donné” simply means “it’s expensive”, the confusingly-similar expression c’est pas donné à tout le monde (lit: it’s not given to everyone) means “not everyone is capable of doing it”.

You can use it to say something is out of your price range or way too expensive.

In addition to the rather straightforward ways of saying expensive in French, there are also lots of strange idioms you can use.

Their literal translations rarely makes sense but it often hilarious so I decided to include them below.

The last one is obviously a phrase you should only use with friends and family.

Literally “I’m not Rothschild”, the phrase je ne suis pas Rothschild is a reference to the wealthy Rothschild family. You can use it to say you can’t afford something.

Lots of people seem to think that this expression is dated and it’s true that you’ll mostly hear it from older French people but everyone understands it.

Other ways to say expensive in French

There are naturally lots of other ways to say expensive in French but this article only includes the most common ways.

Here are two more ways to say expensive in French.

How to say cheap in French

Now that you know how to say expensive in French, let’s discover a few ways to say cheap.

The opposite of cher, pas cher simply means “not expensive”. You can use this phrase in informal situations.

Not as common as pas cher, bon marché remains a popular (and slightly more formal) way of saying something is inexpensive.

Just like pas cher is the opposite of cher, c’est donné (literally; it’s given) is the oppositve of c’est pas donné. You can use it to say something is so cheap it’s almost free.

Low cost is one of many English phrases used in French. People often use it to talk about airlines, travel agencies and products of bad quality.

You may also hear “cheap” occasionally but it’s often used to talk about the quality and design of a product more than its price.

And you, what’s your favorite way to say “expensive” and “cheap” in French?