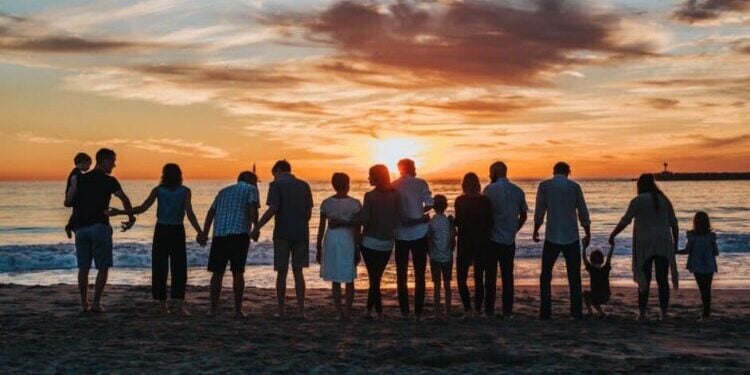 How do you say “family” in French? It’s a question that seems pretty simple, but as is the case with families in general, sometimes things can get a little complicated!

Let’s look at some common French family vocabulary and clear up some confusion about things like talking about family members in French and how to differentiate between step-family and in-laws.

How do you say “family” in French?

The French word for “family” is la famille. It’s a feminine word and can also be used to say “relatives” in some cases.

If you want to talk about your family specifically, you can say ma famille. The pronoun “ma” is used because famille is a feminine word.

Note that there is no single French word for “sibling” or “siblings”. You have to specify if you’re talking about a  brother or sister, or you can say either mes frères, mes sœurs, or mes frères et soeurs.

The word la fratrie may also be used, but this is closer to “the children” in meaning.

Note that in many French families with children, the parents may not be married.  In some cultures, this might be seen as controversial, but in France it’s not an issue.

(une) tatie – aunt/auntie. This is an informal term of endearment for an aunt or great-aunt. It’s not used by everyone, but you will probably come across it. Note that unlike tante, this word isn’t always preceded by an article or possessive pronoun, and can be used to directly address one’s aunt.  Ex: Tatie Simone, la tante Clara nous attend au cafe. (Auntie Simone, Aunt Clara is waiting for us at the cafe.)

(un) tonton – an informal, somewhat childish term for an uncle or a great-uncle, somewhere between “Uncle” and “Unky”. Note that unlike oncle, this word isn’t preceded by an article or possessive pronoun, and can be used to directly address one’s uncle. Ex: Voici mon oncle Pierre. Tonton Pierre, je te présente Sylvie, ma copine. (This is my uncle Pierre. Uncle Pierre, I’d like you to meet Sylvie, my girlfriend.)

un cousin/une cousine – a cousin. As with some other words on this list, this word is usually preceded by an article or possessive pronoun.  Ex: La Cousine Bette est un superbe livre écrit par Honoré de Balzac. (Cousin Bette is an amazing book by Honoré de Balzac.)

Step-family and in-laws in French

You may wonder why these two categories of family members are grouped together. That’s because in French, both are said the same way:

Associating both of these kinds of family members with the word beau or belle (beautiful, lovely, handsome) probably came from the fact that the initial intention was to put them in a positive light…but it can lead to a lot of confusion.

Luckily, there are ways to avoid confusion, both as a speaker and a listener.

If you’re listening to someone else, try to pay attention to context. For instance, if the person talking is a child, it’s likely they mean “stepbrother”, since most of the time siblings are close enough in age that the child probably doesn’t have any married brothers or sisters. Of course, that’s not a total certainty.

If you’re reading a story, you can also use context. for instance, the wicked stepmother is a typical trope in fairy tales, so if you come across the word belle-mère in a French fairy tale, it probably doesn’t mean “mother-in-law”.

On the other hand, in more contemporary storytelling, the difficult mother-in-law is a common trope, so if you watch a French sitcom or sketch comedy show and hear someone complaining about their belle-mère, that’s who they probably mean.

When you’re talking to a French person, the good news is that you can always ask for clarification – even simply by using intonation: For instance: – Mon beau-frère est un passionné de veilles voitures.   – Ton beau-frère ? – Oui, le mari de ma sœur. (“My beau-frère is a fan of old cars.” “Your beau-frère?” “My sister’s husband.”)

Some people may even clarify in advance, the same as you might in English. It’s not uncommon to hear something like: Nous sommes partis en vacances avec mon frère et sa femme (We went on vacation with my brother and his wife) or La femme de mon frère travaille dans le IT. (My brother’s wife works in IT.)

There are a two words that only apply to stepfamily members or in-laws, though. These are:

How to address family members in French

As you can see from the list, in most cases, you have to use an article or possessive pronoun when talking about family members in a general way in French. Some family members can also be called by their title in lieu of their name.

For instance, although this would be considered formal or old-fashioned, a French person could directly address their mother as Mère or their grandfather as Grand-père. You could say this is the English equivalent of someone addressing their mom as “Mother” rather than “Mom” or “Mum”, and “Grandfather” rather than “Grandpa”, “Granddad”, and so on. (These family members are more typically directly addressed as Maman and Papy, respectively.)

The French family members that you can normally do this with are:

In addition, you may hear frère or soeur used either abstractly, as in poetry, or as a religious title for a monk or nun.

In most other cases, all other French family members’ titles would have to be used with an article or possessive pronoun.

That said, there are some exceptions. For instance, Scrooge McDuck (Picsou) is a very popular character in France. Picsou’s nephews often address him directly as Oncle Picsou.

Typically, though, when addressing a family member directly in French, you either omit their title or use a more affectionate one.

For example, my French husband used to call his uncle Tonton Yves when talking to him directly as a child. Now that he’s an adult, he just calls him by his first name, Yves.

On the other hand, when he speaks to his mom, he always calls her Maman. His grandmother is always addressed as Mamie, and he always called his great-aunt Tatie.

Keep in mind that this is just a general rule. Each family is different, and some may not even use typical or traditional family member titles in the first place, but rather nicknames or the like. You can think of this the way many people in English have fond nicknames for their grandparents – for example, instead of Granddad or Grandpa, they might say “Pop-Pop.”

The most important preposition for talking about family relationships in French

In English, we use the possessive form a lot when talking about family: My mother’s brother; My uncle’s cat; My sisters’ farm, etc.

Here are some common family-related words and expressions you’ll come across in French.

la famille – the family. Note that this word can also have a more figurative meaning, or a scientific one or mathematical one. You can visit this helpful webpage to find a list of famille’s many meanings.

Les [nom] – The ___s : Ex: Voici nos voisins, les Dupont. (Those are our neighbors, the Duponts.)  Note that, unlike in English, while the article in French is plural, the family’s name stays singular.

en famille – among family OR “family” as an adjective. For example: Hier soir, on a dîné en famille. (Last night, we had a family dinner.)

une famille d’accueil – a foster family. Note that this term can also sometimes be used to denote a host family, when dealing with exchange students, for instance.

une famille recomposée – a blended family (a family where the parents have remarried/gotten together and now there are step-parents, step-siblings, etc.)

un fils adopté/un fils adoptif/une fille adoptée/une fille adoptive – adopted son/adopted daughter. Ex: C’est le fils adoptif de mon oncle. (He’s my uncle’s adopted son.) Note that, as in English,there is nothing wrong with specifying that someone is adopted, in some contexts. But family is family and so it isn’t polite or normal or necessary to point out that someone is adopted in most situations.

C’est de famille. – It runs in the family.

You can find more family-related French words and expressions in this Wiktionnaire entry.

How can I learn about French family life?

If you’d like to learn more about family life in France, our list of statistics about France is a good place to start.

Once you’ve learned the basics, you can gain more insights by reading books in French and watching French movies and TV shows – after all, families of one kind or another are kind of ubiquitous.

An easy way to practice French family vocabulary is to describe your family, either written down on your own, or to online friends and conversation partners.  You can also imagine a family and write about it in French!

We’re glad that you’re part of the French Together family, or at least that you’ve stopped by for a visit!