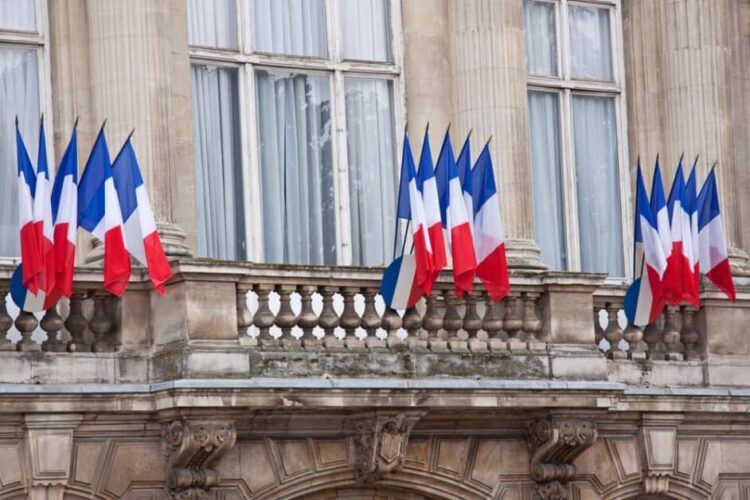 You may know some words for “country” in French, including le pays and la patrie. But how do you say “France” in French, specifically?  It turns out you have several options.

Let’s look at the most common.

Table of Contents
How to say “France” in French
How the French talk about mainland vs. overseas France

How to say “France” in French

Here are six common ways the French refer to their country, whether in literary or formal language, speeches, or in everyday life and conversations.

The  most common way to say “France” in French is….la France. The word originally comes from Francia, the empire of the Franks, one of the groups that were ancestors of the modern-day French. Famous Franks include Charles Martel and Charlemagne.

Important: It’s “La France” and not “Le France” because “France” is a feminine word.

Today, this is the standard way to refer to the modern-day country of France. The term is neutral in context and can be used in formal as well as informal situations. Pretty easy, right?

Oh, another easy thing for speakers of English: France is always capitalized in French, just like in our language. (This rule goes for all countries in French.)

The only thing to keep in mind is that when you talk about countries in French, you usually have to use an article or preposition in front of them. So while you’d say “France” in English, it’s la France in French.

That said, the article usually goes away when you use a preposition. For instance: en France (in France).

Just one quick note about that:  Using the preposition de (of, from) and a singular feminine country in French can be a bit confusing. Most of the time, you’ll see de and the country name, with no article. For instance, C’était un roi de France (He was a king of France).

But if you are talking about the country as a physical place, not a general entity, you would use the article. For example: Nous avons voyagé de la France à l’Allemagne en vélo. (We travelled by bike from France to Germany).

France has had many different forms of government in its long history, from monarchy, to republic, to empire, to republic again…and so on and so forth. Years of revolutions and reforms place us currently in the fifth French Republic.

The term la République or la République Française (sometimes capitalized la République française) is a formal one that would be used in speeches and official documents. Probably the most famous place you’ll hear it is at the end of a presidential address.

Famously, the French president always concludes his speeches by saying Vive la République, vive la France.  This is the rough equivalent to “God bless America” or “God save the queen”. But the République part also implies a strong agreement with the principles of the current form of government. This includes the droits de l’homme (human rights) and the three foundational principles of the French Republic: Liberté, Égalité, Fraternité (Liberty, Equality, Brotherhood).

Referring to France this way is at once a common formal phrase and something charged with meaning. You probably won’t use it or hear it used in everyday life and casual situations.

In the previous entry on our list, I talked about the principles of the French Republic. This moniker for France evokes the origins of the Republic. The phrase le pays des droits de l’homme is a formal or literary way to refer to the fact that France was one of the first countries to champion the basic rights of its citizens, all the way back when the French First Republic was founded in 1792, as a result of the French Revolution of 1789 (yes, there have been multiple French Revolutions).

The droits de l’homme being referred to in this phrase comes from la Déclaration des droits de l’homme et du citoyen (The Declaration of the Rights of Man and of the Citizen), written in 1789. Similar to (and influenced by) the Preamble of the United States’ Declaration of Independence, the major takeaway of this foundational document is the idea that all men are created equal (as opposed to a king or ruling class having more privileges).

Unfortunately, as with the Declaration of Independence, the original document didn’t include certain minority groups, not to mention women. But that’s no longer the case; today la Déclaration des droits de l’homme et du citoyen includes all French citizens (and, in a larger sense, all human beings).

Using this phrase to describe France is a proud and grandiose one – but usually reserved for formal or literary contexts.

4. The claim to fame “France”: Le Pays des Lumières (The Country of the Enlightenment)

The Enlightenment, referred to somewhat more poetically in French as le siècle des Lumières (the century of Lights – that is bright, illuminated thinkers), was an intellectual movement that occurred throughout the Western world in the 18th century and resulted in revolutionary thinking in fields like philosophy, science, medicine, education, and human rights.

France was once the home of Enlightenment superstars like Voltaire, Rousseau, and Diderot (among many, many others!) and the French are still enormously proud of their illustrious intellectual past. In fact, it’s even a part of the French national identity. Today, French culture still places a high value on science, research, logical and critical thinking and debate, and philosophy. The latter is even a required subject in French high schools!

So, the name Le Pays des Lumières for France is a fitting one, although it’s a literary one, not something used in everyday language

From ancient times until around the early Middle Ages, France was referred to as “Gaul”, for the Gauls, a group of Celtic tribes that had inhabited most of it until the Romans invaded (then, these groups integrated and the dominant culture was Gallo-Roman).

Although the Gauls are long gone, as we saw in our related post about how the French say “French”, Gaulois(e) (literally Gaulish or Gallic) is a super-patriotic way some French people may refer to themselves. This is fairly rare, though.

Calling France La Gaule in a historical context (including in the iconic Astérix comics) is totally normal and understandable. But doing it in a modern context shows extreme patriotism and may come off a bit silly or even nationalistic, depending on who’s listening.

6. The geometric France: L’Hexagone (The Hexagon)

Apart from la France, the most common way to say “France” in everyday French is also the strangest and most creative choice on this list!

Mainland France is often referred to as l’Hexagone on the news, in French newspapers and French magazines, and even sometimes in everyday spoken language. You can do an online search for “l’Hexagone actualités” to see the vast number of headlines that use this term.

Why, you may ask? Mainland France can be divided into six coastlines or borders – thus making it technically a hexagon. You can see an image of that in this helpful Wikipedia entry.

This isn’t a new trend or realization: the same article points out that mainland France has been referred to as l’Hexagone since the late 19th century, when French geography teachers started describing it to their students this way.

Even if you don’t see the resemblance, you’re almost guaranteed to come across this term at some point.  Luckily, unlike regular, non-country shapes, when it refers to France, l’Hexagone is always capitalized, so there shouldn’t be any confusion.

How the French talk about mainland vs. overseas France

When most of us think of France, we picture, well, l’Hexagone. But the nation of France has several overseas territories and regions, including Martinique, Guadeloupe, and French Polynesia.

In addition to l’Hexagone, you’ll likely come across three other terms that you can use to differentiate between mainland and overseas France. These are:

Note that métropole can have other meanings – it depends on the context.

An acronym for les Départements d’outre-mer, Territoires d’outre-mer, this collective term refers to all French overseas departments and territories.

This article points out that the term is no longer technically correct, since some of these territories have different degrees of autonomy than others. Nevertheless, les DOM-TOM is still an extremely common phrase that you’re sure to come across in French media and that you may even hear in informal conversations.

L’outre-mer (overseas [territories]) is another way you might hear French overseas countries and territories referred to, especially in spoken language, although the exact political definition may be inaccurate or imprecise.

Those are the most common ways to say “France” in French.

Did any of these terms surprise you? Which one is your favorite?