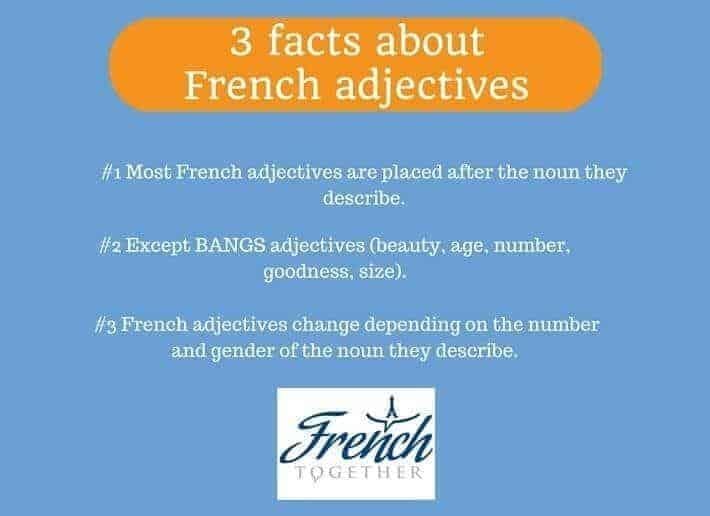 In English, adjectives are pretty easy to use. You put them before the noun they describe and you’re done.

In French however, the placement of adjectives varies. And if that wasn’t enough to confuse you, most adjectives also change depending on whether the noun they describe is masculine, feminine, singular or plural.

Luckily, in today’s lesson, you’ll discover several rules that’ll make it easier for you to know how to place and use French adjectives.

You’ll also discover how to use the most common French adjectives.

As in English, there are several different types of adjectives in French. In this article, we’ll be focusing on what immediately springs to mind for most of us when we think of adjectives: qualitative adjectives (adjectifs qualificatifs)- that is, words that describe someone or something’s state or appearance.

As you can probably guess, there are thousands of adjectives in French. But there are some that you’ll come across a lot more often than others.

Here are some of the most common French adjectives, in their masculine and feminine singular forms:

Where should you place French adjectives?

In English, you put adjectives before the noun they describe. So you’d say “a green bag”, or “a blue house”. That’s not necessarily the case in French….

Where to place most French adjectives

Most French adjectives are placed after the noun they describe. So you’d say:

To remember that, imagine a Frenchman coming to you and asking with a heavy (and charming) French accent “Excuse me, where is the house blue?”.

In most cases, French adjectives are placed after the noun they describe. However, there are some major exceptions.

Here come the bad boys — or rather the BANGS boys, adjectives that describe:

Most adjectives that fall under the BANGS category are placed before the noun they describe. Here are some examples:

You may come across some exceptions. For instance, délicieux (delicious) can come both before and after the noun it describes, depending on the context. (We’ll discuss why some French adjectives can come either before or after a noun in a minute.)

But placing BANGS adjectives before a noun is a good general rule to know.

French adjectives that can go before OR after a noun

Some French adjectives can be placed before or after a French noun. This placement choice usually changes their meaning, even though it may be a subtle difference in many cases.

Common French adjectives that can be placed before or after the noun include:

ancien/ancienne – Before a noun: former  After a noun: old

curieux/curieuse – Before a noun: strange  After a noun: curious

faible – Before a noun: little, poor, slight  After a noun: weak (literally or in terms of character)

sacré/sacrée – Before a noun: damn/hell of a  After a noun: sacred

vrai/vraie – Before a noun: real, true (in a feeling sense) After a noun: true

If you want to find more of these kinds of French adjectives, be careful!  Most lists seem to include at least a few examples that aren’t common in contemporary French.

For instance, one list I looked at while researching this article is claims that gros means “fat” only if it comes after the noun, but this isn’t true, at least not in contemporary French.

So it’s a good idea to check these using a French-English dictionary or app, or a site like Wiktionnaire, just to be sure.

Other reasons why a French adjective could change places

The more you study, read, and listen to French, the more you’ll start to notice that just about any French adjective might be placed before or after a noun on occasion, although this place shift is usually rare.

If they aren’t on the list above, it could be for literary reasons (poetic inversion, etc.), or it could mean that the writer or speaker is giving the adjective a slightly different connotation, since:

In many cases, though, the difference is fairly subtle, so don’t be shocked if you don’t immediately notice or understand this low-key shift in meaning. For instance, look again at the list of French adjectives that typically change places. It’s easy to see how some of these, like doux, follow this rule. Others, like ancien or sacré, take a bit of reflection, and even then may be hard to figure out.

One thing I can promise is that the more French you absorb and learn, the more these will just seem natural. For instance, I didn’t learn sacré‘s two meanings in my French classes at school, but through conversations with French friends.

What’s the effect of gender and number on French adjectives?

English adjectives are invariable, but that’s not the case for French adjectives. In French, most adjectives change depending on two things:

There are a few invariable French adjectives – that is, adjectives that never change, regardless of the gender or number of what they’re modifying. These include numbers themselves (although there is some grammatical debate over whether or not numbers count as adjectives).

When it comes to most French adjectives, here is a rule you can follow in most cases:

That said, a number of French adjectives have specific endings or don’t follow these rules the same way, although they also have to change based on gender and number. We’ll talk more about these irregular adjectives a little later on.

How to place and modify the most common French adjectives

Here is how to place and modify the most common French adjectives.

The advantage is that once you know these common adjectives, you’ll mainly encounter adjectives that follow the normal placement of adjectives and are therefore placed after the noun they describe – well, at least most of the time.

How to use regular French adjectives

Here are a few examples with common adjectives:

This is an adjective you probably already know.

These small cakes are delicious

These little sweets are delicious

Here you can see that délicieux becomes délicieuses. That’s because the ending of adjectives ending in -eux often becomes -euse if they describe a feminine noun. We’ll talk more about this in the section on irregular adjectives.

Jeune follows the regular pattern. The only difference is that you don’t need to add a “e” when it comes before a feminine noun since jeune already ends with a “e”.

The young man is gone.

The young woman is gone

The young men are gone

The young women are gone

How to use irregular French adjectives

Here are three general rules that work for many irregular adjectives:

Unfortunately, while these are good general rules for irregular French adjectives, sometimes you need a few extra rules, or different ones entirely.

Here are a few examples with irregular adjectives:

It is a good idea

It is a good restaurant.

The macarons from Pierre Hermé are good

The strawberries from the market are good.

My boyfriend is Australian.

My girlfriend is Australian.

Most irregular French adjectives will fall into one of these ending groups. But there are a handful that follow their own rules entirely.

The most common of these highly irregular French adjectives are:

This is one of the most tricky French adjectives. Luckily it’s also one of the most common, so you’ll quickly know how to use it if you get a lot of exposure to the French language.

The old man is here.

The old woman is here.

The old districts of Paris are beautiful.

(The) old houses are less expensive.

Here is another tricky and extremely common French adjective.

She has a beautiful face

He (lit: it) is a handsome man

In both cases, beau describes a masculine noun, so you may be wondering why beau becomes bel in the second example.

Remember that in the three general rules of irregular French adjectives, an adjective ending with -eau will take an “l” before masculine nouns starting with a vowel or a silent “h”.

He has beautiful skin.

He is in a right mess.

(This is a French idiom that literally translates as “to be in beautiful sheets”.)

There are a lot of beautiful women in France.

As you may have guessed, nouveau follows the same pattern as beau.

I love your new coat.

I bought a new computer.

Jean has a new girlfriend.

He received his new clothes yesterday.

My new shoes have had a lot of success. (have been getting me lots of comments).

faux (false, fake, or wrong, depending on the context )

No, his name’s not Mr. Magnificent. That’s a fake name.

It’s a fake cane. There’s a blade inside of it.

I’ve got the feeling that these are fake diamonds.

Even fake spiders scare her!

My cat’s fur is super soft!

They sang us a sweet little song.

These sauces are pretty mild.

I will always remember the sweet hours spent in your company.

NOTE THAT ON RARE OCCASIONS WHEN fou precedes a noun that begins with a vowel or silent “h”, it becomes fol in its masculine singular form (ex: un fol ennemi).

We loved each other madly.

Twenty euros for a sandwich? What is she, crazy?

His two sisters are crazy about you!

This movie is too long.

It did us good to breath the fresh mountain air.

When it’s hot outside, nothing beats a cold drink!

This supermarket has a good variety of fresh fruits.

An old stone house is perfect in the summer because all of its rooms stay cool.

How do you use multiple French adjectives in one sentence?

For instance, here’s a sentence where one of the adjectives is a BANG word, so it naturally will go before the noun, while the other adjectives will come after:

Don’t forget that you can also use words between adjectives when necessary. For instance:

He’d like to buy the t-shirt that’s red and not expensive.

When using a group of adjectives with a verb like être, it’s even easier. Keep BANG adjectives or any others that should precede the noun, before it, and then just list the others. For example:

This little girl is clever, cute, and mischievous.

A good way to get more familiar with ordering adjectives in French sentences is to start observing some. When you read in French, try to mark each sentence you come across that has more than one adjective in it. Soon, you’ll start to notice patterns. And in general, the more you read and listen to French, the more naturally using adjectives will feel. I know that’s been the case for me!

Here’s a webpage that’s a very helpful guide if you want to go even more in-depth into the grammar and rules of irregular French adjectives. But most importantly, keep in mind that irregular adjectives may not follow all the rules, but one that they do follow is this: The more you read, listen to, and speak French, the more familiar they’ll become to you. Soon, these rules will feel easy and intuitive.

Now that you’ve learned all about French adjectives, why not make a French sentence with an adjective (or a few) and add it to the comments section?