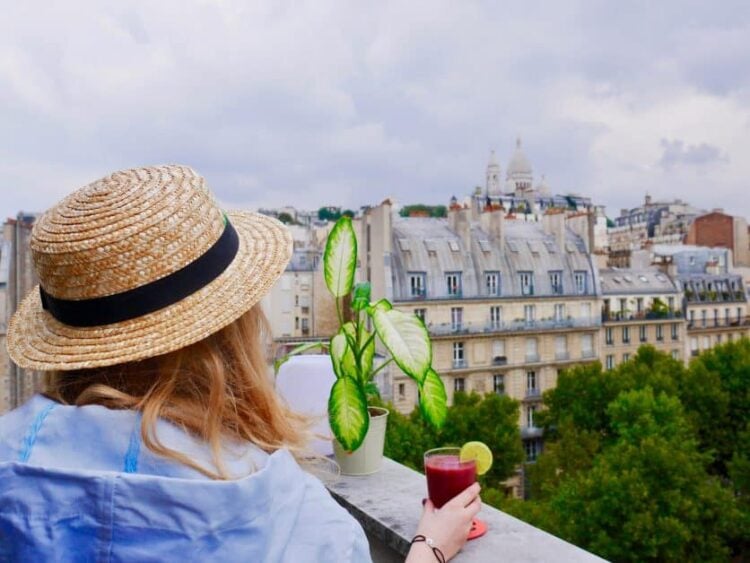 Homes, shelters, temples, churches, and other structures have dotted the French landscape since prehistoric times. Today, you can see everything from Gallo-Roman ruins to Romanesque churches to Modernist houses. But when we think of French architecture, a few specific, distinctive styles that originated here especially come to mind.

Let’s learn more about these iconic types of French architecture.

Gothic architecture originated in late medieval France, but with its high arches and dramatic lines, it soon made an unforgettable impression on most of Europe. In France alone, you’ll still find countless Gothic churches and a few other examples of this architectural style, as well. For art historians, Gothic architecture is often organized into stages, from the heavier Early Gothic, to the crowning achievement of Flamboyant (Rayonnant) architecture, with elaborate exteriors and stone in delicate arches leaving space for large stained glass windows.

When the geometric harmony and balance of the Renaissance and subsequent eras came into fashion, Gothic style came to be considered barbaric – in fact, that’s where it gets its name. The Goths ruled  many places in Europe in medieval times, and the term suggested things that were primitive and old-fashioned.

But as a more romantic and creative mindset took hold in the late 18th and early 19th centuries, , Gothic architecture was appreciated again. That’s why you’ll find Gothic-style buildings in places like the United States. The Gothic revival in France was influenced by Victor Hugo’s novel Notre-Dame de Paris (The Hunchback of Notre Dame), which celebrated the history of the eponymous church. Architect Eugène Viollet-le-Duc carried out many restorations of Gothic buildings in France, sometimes embellishing them rather than strictly following historical accuracy.

Years it was most popular: ca. late 15th-early 17th centuries

Famous French Renaissance buildings and monuments in France: Many of the castles of the Loire Valley, including the Châteaux de Chambord and de Chenonceau; the Lescaut Wing of the Louvre.

Inspired by the classical architecture the French army witnessed during campaigns in Italy, this style is at once more balanced and just as expressive as the Gothic style that preceded it. French Renaissance style combines classical elements like columns, a repetitive, balanced facade, and classical motifs, and adds what most architecture experts call “something distinctly French”, notably a Gothic influence. And so, those classically-inspired facades are often topped by whimsical rooftops.

Typical French Renaissance buildings include many of the chateaux in the Loire Valley. You can easily see the relative stasis of their facades, combined with dramatic details like pointed turrets and interesting details and forms on their rooftops. The later period of French Renaissance architecture involved more focus on traditional classical forms, including following the order of columns and using decorative flourishes like caryatids.

Years it was most popular: 17th-late 18th centuries

Famous French Baroque style buildings and monuments in France: the Palace of Versailles; the Place de la Bourse in Bordeaux; many of the hôtels particuliers (residential mansions) of the Marais district in Paris; Les Invalides

Evolving out of the French Renaissance style, the French Baroque style was about evoking the grandeur of the kings of France. It’s no wonder that this style was in vogue during the reigns of some of France’s most powerful monarchs, Kings Louis XIII, XIV, and XV.

French Baroque architecture continued to use certain elements found in French Renaissance architecture, like classical themes, columns, and repetitive facades. But the buildings are often on a more massive scale -for instance the palace of Versailles.

During this era, some architectural stars emerged, including François Mansart, who popularized the sloping slate roofs that came to be given his name (mansard roofs) and landscaper André Le Nôtre, the master of the French formal garden (jardin à la française). To me, these two stars say a lot about French Baroque: it’s not as decorative or eccentric as Italian Baroque, but there are still a lot of unique flourishes.

Another major development under this style was the use of the dome. You can still find many French Baroque-style buildings that are capped with domes today, including La Sorbonne and Les Invalides.

Years it was most popular: 17th-early 20th centuries

When France began to expand its territories, settlers took architectural notions and preferences with them. Today, you can find French colonial architecture in locations as far-flung as Louisiana, Canada, and Vietnam.

French colonial architecture isn’t an exact copy of any France-based architectural style. Instead, it’s a combination of French architectural influences and local culture and construction materials. The presence of certain typical features, like a wraparound porch, also depends on the local climate and function of the building. For instance, a government building probably wouldn’t have a wrap-around porch.

Key features: Beaux-Arts architecture is a combination of many different influences, including classical and Baroque, and often involves modern architectural elements like visible wrought iron and glass roofs.

Famous Beaux-Arts buildings and monuments in France: The Grand Palais; the reading room of the Bibliothèque Sainte-Geneviève; the Palais Garnier opera house, many train stations constructed in the 19th and early 20th centuries throughout France.

Named for the architecture classes at Paris’s École des Beaux-Arts (School of Fine Arts), this style sometimes feels more like a catch-all term rather than a distinctive movement. Beaux-Arts buildings often feature a mix of classical and modern elements – for instance, a French Baroque-inspired facade with a glass roof.

Beaux-Arts buildings often incorporate then-modern features like exposed iron and glass ceilings, as you can see in many French railway stations as well as sites like the Grand Palais and the reading room of the Bibliothèque Sainte-Geneviève in Paris.

Years it was most popular: ca. 1852-1890’s (But many buildings inspired by this style continued to be built in the following decades in France and elsewhere)

Key features: Although public buildings constructed during this time might be an eclectic mix of styles, all Haussmannian buildings are intended to embellish and blend into the urban landscape. Many public buildings feature glass roofs and/or the use of modern materials like wrought iron.

Haussmannian apartment buildings have a uniform facade, usually of cream-colored limestone, with balconies on the second floor and a continuous balcony on the fifth floor. The buildings have Mansard roofs.

Famous Haussmannian buildings and monuments in France:  What we think of as typical Parisian apartment buildings.

In the early 1850’s, Baron Haussmann, Napoleon III’s prefect of the Seine, was asked to draw up plans to modernize Paris. The intention was to open up the crowded city. Although it has its critics (for one thing, this urban transformation involved demolishing many historical streets and neighborhoods), Haussmann’s work has come to be the defining look of Paris today.

Haussmann designed everything from boulevards and park benches to the famous, typical Parisian apartment buildings that bear his name today (un immeuble haussmannien). He also approved and influenced the designs of others, including many public buildings constructed in Paris at that time, like railway stations and the Palais Garnier opera house.

Although mostly associated with Paris, Haussmannian architecture has influenced buildings in cities throughout France, as well as in other places around the world.

As you might expect, many regions of France have their own special architecture that you’ll come across from time to time. These include the Roman/Italian-influenced architecture of Provence and the residential style of architecture in Normandy, which features houses and buildings with visible beams in a variety of styles and colors, topped by a pitched roof. A famous example of the latter is Le Normandy Barrière Hotel in Deauville.

You can learn more about the architectural style of a typical region by doing an online search or looking up the general term “French regional architecture”.

Featuring rounded arches and thick walls, this style dates to around the 6th to 11th centuries AD. You can still find many Romanesque churches throughout France. But while this type of architecture is a part of the landscape in many French cities and villages, it didn’t originate in France and is found throughout Europe.

Its name is French, but this artistic and architectural style that briefly and wondrously flourished from around 1890-1910 actually originated in fellow francophone country Belgium and then quickly went international. That said, when many of us think of France, Guimard’s famous Art Nouveau Metro entrances certainly come to mind! Art Nouveau features vegetal-looking forms, bright, glossy colors, and dramatically curved lines.

This artistic, design, and architectural movement from the mid-1910’s to the early 1940’s technically originated in France, but it quickly went global. You can find many Art Deco facades in France, but the style is also closely associated with places like New York  and other American cities. Unlike its short-lived predecessor, Art Nouveau, Art Deco was about dynamic lines and geometric features, rather than organic-looking forms and colors.

Where can I learn more about French architecture?

If you prefer the feel of pages, your local bookstore or library is probably a great source for architecture books.

And of course, you can read and listen to information about French architecture in French as well. What a great way to practice your language skills as you learn about some of the world’s most beautiful buildings!