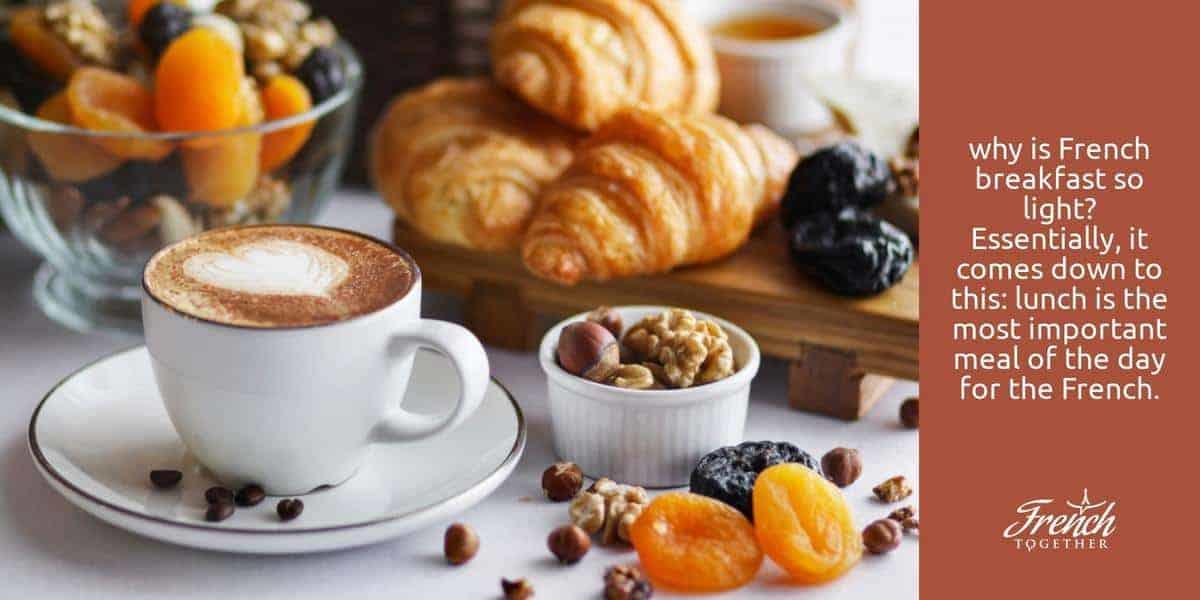 “French breakfast”: The phrase might conjure up an Instagram-worthy image of a croissant on a pristine white plate, an espresso in an equally pristine mug beside it.

Instagram isn’t reality, but this image actually isn’t too far from the truth.

A typical French breakfast is light, sweet, and fairly simple. It’s usually made up of breakfast cereals, a tartine (slice of bread with topping) and a drink (tea, coffee, orange juice). It’s usually eaten between 6 AM and 8 AM.

Let’s find out why, and what the French really eat for the first meal of the day!

In France, breakfast is the least important meal of the day

Many cultures, including mine, American, raise children with the belief that breakfast is the most important meal of the day. Our parents tell us this, TV tells us this, doctors tell us this, and so on. It makes sense: breakfast is when you “break” the “fast” after a night’s sleep. It’s the meal that will get you through a busy morning until lunchtime. It should be filling, right?

So then, why is French breakfast so light? Essentially, it comes down to this: lunch is the most important meal of the day for the French. Even serious corporate businesses often look the other way if employees take more than an hour at lunch.

For the French, lunch is that big meal that’s supposed to get you through the day. A late-afternoon snack is perfectly acceptable for kids – there’s even an official name for it, le goûter. But in my experience, at least, for most people in France, it’s considered more shocking for an adult to have a snack than a cigarette. So, make sure your lunch is filling. Having a light breakfast helps with that.

If you’re having or serving a typical French breakfast, there are generally no salty foods. Instead, think a light pastry, toast with butter or jam, or cereal. I say “or” because most people only choose one of these things, not a smorgasbord combination.

French people are advised to eat un produit laitier (dairy product) like milk or yogurt (cheese is completely unheard-of at breakfast in France) and some fruit at breakfast, as well, but they don’t always follow the rules.

The lack of interest in breakfast in France can be problematic. According to this recent news segment, 1 in 5 French children never eat breakfast. Sometimes this is due to lack of time or not understanding the importance of the meal, and occasionally it’s also for economic reasons (although, fortunately, this is not extremely common in France, where there are an excellent welfare system, food banks, and other aids for less fortunate people). The report hits home: This year, my son’s school started serving a collation (small meal to tide you over) of different fruits when the students get to class.

If there are croissants, they aren’t always fresh

One way your Instagram vision of a typical French breakfast probably isn’t accurate is that, sadly enough, most French people don’t eat a fresh croissant every morning.

If they did, it would mean having to get dressed (no one in France goes out in their pajamas or sloppy sweats) and heading to the bakery, which may be far away if you don’t live in a city or the center of a town or village. Since the French don’t generally eat “on the go”, you couldn’t just enjoy your croissant on your way to work or while standing on the corner. And they don’t do the Italian thing of standing at a counter in the bakery, either. So, you’d probably have to come back home or wait till you get to work to eat it (depending on your office culture).

So, most French people who want a croissant for breakfast – or a baguette, or anything else you’d find in a boulangerie – either eat something they bought the night before, or have une pâtisserie industrielle (mass-produced, prepackaged pastry).

These certainly aren’t fresh or healthy as what you find in a boulangerie, but most of them still taste pretty good, at least. My personal favorites are Pasquier brand briochettes (little brioches). This commercial makes me chuckle – some kids enjoy a breakfast of Pasquier pâtisseries industrielles, which hurts and disappoints their boulanger father, who unexpectedly shows up.

Some French people might use their toaster (un grille-pain) to toast slices of baguette or other types of bread from the boulangerie – or, more commonly, prepackaged sliced bread. They then spread butter (du beurre) and/or jam (de la confiture) (of which there is a huge range of flavors in France), or Nutella on it. This typical French breakfast fare is called une tartine.

Other French people – including my French husband and our half-French son, prefer to eschew bread altogether. Instead, they eat cookies (des biscuits/des gâteaux).

Sometimes, my son has cereal (des céréales), which has become increasingly popular for breakfast in France, especially for kids.

Interestingly, the French generally don’t like for things to be extremely sugary, but just about any kind of kid-oriented cereal you’ll find here (as well as many for adults) are very, very sweet. I hate sweet cereal and have only found two regular (not marketed as healthy or affecting the bowels in any way) kinds that aren’t covered in sugar and artificial flavoring: Rice Crispies and Corn Flakes (yes globalization is everywhere, even when it comes to cereal).  Though I don’t like sugary cereal, I love the jingle for Miel Pops.

Cereal may be a popular French breakfast food, but it’s not without its critics. This documentary’s opening scenes show a typical French breakfast and how it’s been transformed (in the documentary team’s opinion, for the worse) by the introduction of cereal. It’s understandable that anyone would rail against mass-produced, artificially colored and sweetened foods, but at the same time, the documentary does point out why cereal has gained ground in France: it’s easier to serve and prepare than, say, a tartine made with non-industrial bread.

That charming little espresso you pictured when you thought of the typical French breakfast is also pretty accurate.

French adults usually drink some kind of coffee for breakfast. However, many of them prefer café au lait, which they often drink in bowls, rather than mugs.

Bowls of coffee tend to be an at-home thing. I’ve been to a few cafes or restaurants that offer them, but most of the time, coffee in a café or restaurant is served in a small mug. This can be off-putting to people from cultures where coffee comes in big portions. So, many cafes, especially in more touristy places, offer something called a café américain (American coffee). This is coffee served the typical American way – less strong, and in a large mug.  As its name suggests, it’s not a typical part of French breakfast.

Ground coffee isn’t necessarily part of a typical French breakfast, either. While many French people do drink this, there’s also instant coffee, as well as Keurig machine capsules.

What do French people drink for breakfast, besides coffee?

Although it’s very common, not everyone drinks coffee for breakfast in France, of course.

In the north of France especially, many people drink chicory (la chicorée), a coffee substitute with a distinct taste that comes from a plant common to France. Although people in many cultures have drunk chicory throughout history, in France it was popularized during World War II rationing and food shortages. It’s considered somewhat old-fashioned and unfashionable, but you’ll still find it, especially the most popular brand, Ricoré (a chicory and coffee blend), in just about any French supermarket.

Other French people  – especially ones who are watching their health or weight – might prefer tea (le thé). This might mean a common tea from a brand like Lipton, or an organic, herbal tea, with homeopathic qualities (promoting things like calm, energy, weight loss, etc.).

une tartine (toast with a spread)

Une tartine is toasted bread with a sweet of savoury topping such as:

Every morning at breakfast, my husband drinks a cafe au lait in a bowl and eats a piece of bread with butter. My son eats cereal and drinks an orange juice. Sometimes, I go to the bakery at the bottom of our street to get us croissants. But most of the time I eat a prepackaged pastry and drink an orange juice.

Some realistic views of a typical French breakfast

Although that Instagram image of a French breakfast isn’t completely false, to get a more realistic glimpse of where, how, and what the average French person eats for breakfast, there’s a better source: breakfast food commercials.

8 thoughts on “What is a typical French breakfast really like?”