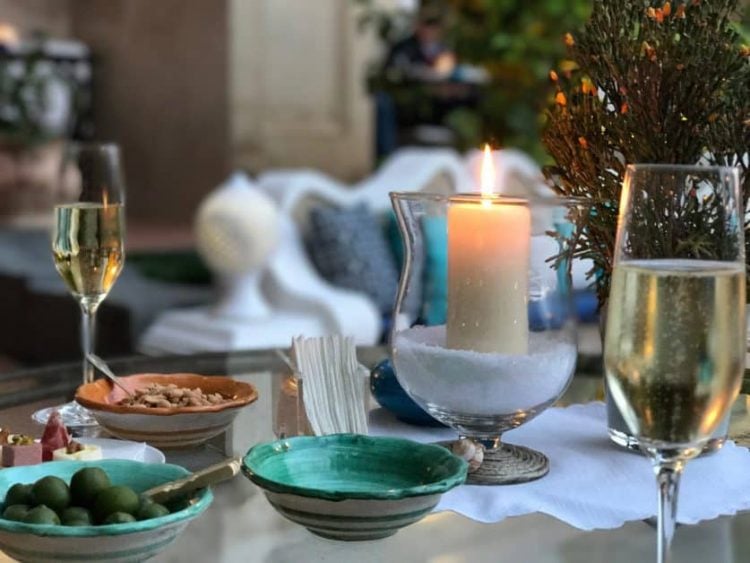 The holiday season is upon us, which means you might be wondering what it’s like to celebrate Christmas in France.

Many French Christmas traditions are the same or similar to Christmas customs and celebrations around the world, but a few might surprise you. From songs, to Santa, let’s look at what it means to celebrate the holiday season in France.

Who celebrates Christmas in France?

Before we get started, in case you were wondering, let’s talk about who celebrates Christmas in France.

France is traditionally a Catholic country, and while many Catholics (and Christians in general) in France today aren’t strictly religious, Christmas and other Christian holidays continue to be major celebrations.

According to a number of studies and surveys, though, a majority of French people see Christmas as a time to be with family above all, not necessarily as a religious holiday.

This is why most people in France celebrate Christmas.  This includes Christians (practicing or not), as well as people who simply like the tradition or are participating with their family.

As in most countries where people from other cultures and religions live, many non-Christians also like certain aspects of Christmas and take part in some festivities or celebrate it in certain ways. For instance, I know many Muslim families who let their kids have a few gifts around Christmastime. That said, never assume that someone celebrates Christmas just because they live in France.

Here are four common French Christmas traditions that are similar to those you’ll find in many other countries and cultures.

These calendars have a little tear-away panel or drawer that you open for each day in December as you count down to Christmas. While some advent calendars feature a religious message for each day, the most popular kind in France feature…chocolate. Around the end of November, French grocery stores will start putting out a panoply of advent calendars, from high-end, to inexpensive ones that are often decorated with kids’ favorite pop culture characters.

Although most French people don’t go overboard when it comes to decorating their home (inside or out), tastefully pretty lights and window displays in towns and shops are de rigueur in most of the country.

Paris is especially famous for the Christmas light display along the Champs-Elysées (inaugurated each year by a celebrity, no less!), as well as the holiday window displays in its grands magasins (department stores), which feature different themes each year and incorporate puppets, animatronics, video art, designer clothes and jewelry, toys, and much more in innovative and whimsical ways. Going to see les vitrines (the shop windows) is an annual tradition for many families in Paris.

But even the smallest village will often have pretty Christmas light decorations along lampposts, and garlands covering shopfronts and the doors of churches.

The largest Christmas market in the world is in France – in the city of Strasbourg, to be precise. This may seem a bit strange, since the French aren’t the most “Christmassy” people, as we’ll learn. But Strasbourg is on the border with Germany, which is a pretty Christmas-crazy country.

Christmas markets have become popular throughout France, so if you’re staying in a French town or city, you’ll probably be able to stroll among  the iconic chalets (little wooden stalls) and sample local crafts and food.

Many towns, cities, and villages will also put up free or inexpensive  attractions like skating rinks or carousels and other rides.

When I learned French in school, I thought that going to midnight mass (la messe de minuit) on Christmas Eve was something most people did. But when I actually came to France, I found out that this isn’t the case. For one thing, as I’ve mentioned, not all people who celebrate Christmas here are practicing Christians. For another, it’s not particularly practical, especially if you have young children or live far from a church. And speaking of that last one, not all churches offer midnight mass, to begin with.

Still, this Christmas tradition is a part of Christmas for some French people. One year, I went to celebrate Christmas with a friend who lived in a village near Strasbourg. I was pleasantly surprised to find out his family actually went to midnight mass, and I happily joined them.

Whatever your religion, if you can make it to a midnight mass in France, I’d definitely recommend going at least once in your life. It was beautiful, and the music — a mix of hymns and (the rare) popular carols — was lovely.

In some countries, like the United States, we “color code” holidays. For example, for Americans, Christmas colors are red and green and Hanukkah colors are blue and white/silver.  But in France, there’s none of that going on at all. It threw me off at first to see the many Christmas trees in shops that are covered in blue and silver ornaments, but ultimately, it allows for more creativity.

Christmas carols and greeting cards are two essential parts of Christmas for many of us. Not so for the French!

Although there are a few exceptions, notably “Petit Papa Noël”(most famously sung by Tino Rossi) and “Vive le vent” (the French version of “Jingle Bells”), Christmas carols really aren’t a big deal here in France. In stores that want to play on the Christmas spirit (to open potential customers’ wallets, more than their hearts), you might hear some English-language carols over the radio. But for the most part, music just isn’t a part of Christmas in France the way it is in many other places.

The same goes for Christmas cards. Every year in my Franco-American household, the holiday season brings an onslaught of cards.  These pretty much all come from the American side of the family.

While sending cards, especially cards with photos of your family/kid(s)/pet(s) on them, is extremely typical in the US and other places, it is not in France. You might get a holiday card from someone from an older generation who’s not going to see you in person,  but receiving a glossy photo of a kid on Santa’s lap with the words Joyeux Noël pasted over it is simply not done here.

Yes, dear reader, there is a Santa in France: Le Père Noël. For the most part, he’s portrayed exactly the way Santa is in most of the world. But there are a few exceptions.

For one thing, in some parts of France, Le Père Noël – or rather, his real, saintly incarnation, Saint Nicholas, visits France twice in December.

In addition to Christmas, in some parts of France, la Saint-Nicolas, the feast day of Saint Nicholas, is celebrated as a separate holiday. Held on December 6, this holiday is more focused on the traditional representation of St. Nicholas, rather than the red-and-white wearing Santa Claus most of us are familiar with. Saint Nicolas often distributes little gifts and sweets, and is sometimes accompanied by le Père Fouettard (Father Whipper), a hooded, frightening figure who, at worst, whips or kidnaps bad children, and at best gives them things like onions or coal.

That’s another way the French version of Santa Claus (or Saint Nicholas, to be more precise) might differ from the one you know: he has a scary sidekick.

Still, if the concept of the naughty list ever stops working on my son, I might just tell him about le Père Fouettard one day….

In many countries, families gather and give gifts on Christmas Day. But French people tend to exchange gifts on the night of Christmas Eve (le réveillon (de Noël)), rather than on Christmas Day (Noël/le jour de Noël), although kids do often get their presents from le Pere Noël on Christmas morning.

There’s no connection with Hanukkah

In some countries, very much including the US, the winter holiday period doesn’t just mean Christmas, but Hanukkah as well.

The Jewish community in France does celebrate Hanukkah (la Hanoucca), but it’s actually a relatively minor Jewish holiday — it was amped up in places like the US for commercial and cultural preservation reasons. Because of this, and due to the unfortunate (to put it mildly) history and even current signs of anti-Semitism in France, Hanukkah is much less well-known and popular among the general French population.

That being said, there are Hanukkah celebrations, both in individual homes and in Jewish communities. A few years ago, I even noticed an ad announcing that a menorah (une hanoukkia) lighting would be broadcast live from the Champs-Elysées. But it’s not a big deal or a way to unite Jewish and Christian communities.

Food is the true meaning of French Christmas.

You could say that in France, food is what makes Christmas, Christmas.

This last one is la vedette (the star) of Christmas.  Not all French people eat foie gras (although that’s usually simply because they don’t like it, rather than animal rights-related issues), but for most of the population, it’s the essential part of a true holiday celebration. Different surveys show between 80% and 60% of the French consider foie gras a holiday “must”. Look at how, even with only 60% of the vote, it outranks other typical French holiday fare.

Another way food is a part of French Christmas is the go-to French Christmas gift: a box of chocolates. If you have to buy a present for a French person and you don’t know what to get them, chocolates are the answer. Even the smallest corner shop will have a display of several different boxes of chocolates, from the upscale, to the affordable, to kid-friendly brands like Kinder and Milka.

The holiday season in France isn’t just about eating food – it’s also talking about it! There aren’t a lot of French Christmas movies (although people do appreciate some dubbed Anglo-Saxon classics, as well as the cult favorite Le Père Noël est une ordure). But special news reports and entire documentaries about holiday foods are everywhere. You’ll find them on just about every mainstream French TV station.

A typical French Christmas meal involves multiple elaborate appetizers, usually including foie gras as one of the courses. Then there’s the main course, which is often some kind of fowl. That’s followed by a cheese course (an essential part of any French multi-course meal) and then a dessert.

The typical French holiday dessert is la bûche de Noël (Yule log), which is a cake or ice cream cake shaped like a log. There are many different flavor options, and in keeping with the aesthetic aspect of decorating here, you’ll find everything from a basic round log with delicious swirled ingredients, to innovative (often very expensive) versions created by famous pâtissiers (pastry chefs).

A few other French holiday desserts or sugary treats that you’re likely to find throughout France include chocolates (of course), dried dates (dattes), often filled with almond paste, as well as other exotic fruit. Marrons glacés (caramelized chestnuts) are also fairly common.

What do you think about these French Christmas traditions? Have you ever celebrated Christmas in France?

However you celebrate Christmas where you currently are, I hope yours is very merry (and, if possible, as filled with chocolate as a typical French Christmas is!). And if you don’t celebrate Christmas, I hope that the spirit of the season still warms you, especially after this difficult year.