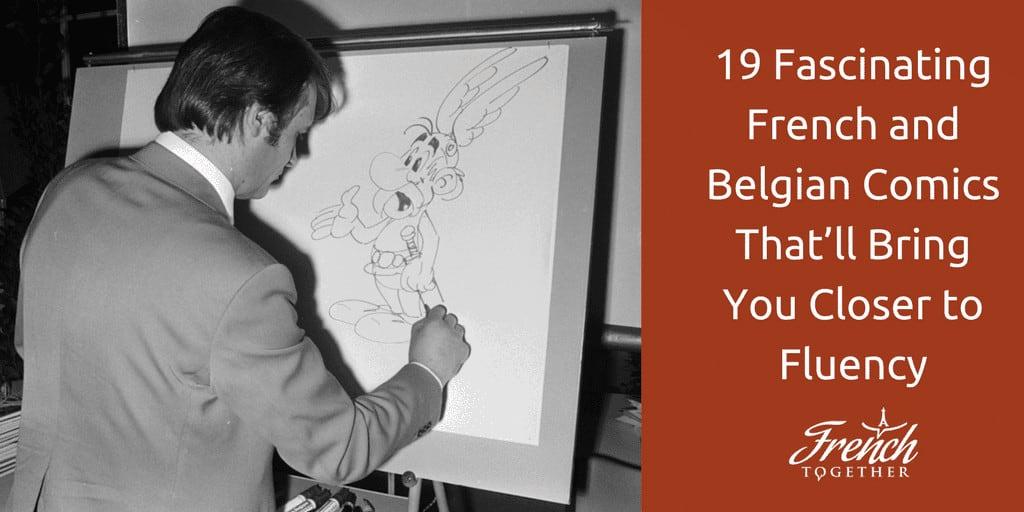 If the only French language comics you know are Tintin and Asterix, you’re missing out.

These are amazing comics for sure but the bande dessinée (Franco-belgian comics) scene is one of the most diverse in the world and it would truly be a shame not to give other well-known comics a try.

Whether you want to plunge into a fantastic story, discover the everyday life of the typical French family or enter a world of adventure, political scandals and mystery, there is a French comic for you.

Here are 19 of the most popular French-language comics!

Gaul is under Roman occupation and Caesar is winning battle after battle.

He only has one problem: a tiny village of Gauls is still resisting thanks to the magic potion Getafix, the village druid makes

And Obelix, a dim-witted warrior just happens to have fallen into it as a kid which gives him extraordinary strength.

The whole series follows the adventures of Obelix and his short but smart friend Asterix as they terrorize Romans and make Caesar’s life considerably harder.

Translated into more than 100 languages and dialects and turned into 13 movies, this series of 36 charming French comic books is a must-read many French people grew up with.

Created by Hergé, this series of Belgian comics relates the adventures of Tintin, a young reporter and adventurer who travels the world with his faithful dog Milou and exposes political scandals.

Unfortunately, the realistic depiction of 20th century Europe in Tintin means that the comic tends to be racist and stereotypical.

Known for the influence it may have had on Star Wars, Valerian and Laureline is one of the most famous French science fiction comics series.

This action-packed series relates the adventures of Valerian, a dark-haired spatio-temporal agent from the 28th century, and his redheaded female colleague Laureline as they travel through space and time trying to protect time from rogue time travelers.

This Belgian comic is all about the everyday life of Gaston Lagaffe (literally: Gaston the blunder), a lazy office worker who makes mistake after mistake, and never seems to be done causing accidents.

Translated into more than 12 languages, this hilarious series will never cease to entertain you.

Drawn and written by different artists over the time and published in the Belgian magazine Spirou, Spirou et Fantasio relates the adventures of two adventurous journalists, their pet squirrel Spip, and their inventor friend the Count of Champignac.

Describing the life of a typical family in a normal town, Boule et Bill is another well-known Belgian comic published in Spirou magazine.

The focus on a normal family living a normal life makes it a great choice for you if you would like to see what a typical Belgian or French family is like.

Written by several writers including René Goscinny (author of Tintin), this parody of the western genre takes place in the American Old West.

Lucky Luke, also known as the “man who shoots faster than his shadow”, and his horse Jolly Jumper try to restore order and justice, and do their best to stop the Dalton brothers, two particularly motivated bandits.

Created by Belgian writer Edgar P. Jacobs, the Franco-Belgian comic Blake et Mortimer relates the adventures of Philip Mortimer, a British scientist, and his friend Captain Francis Blake of MI5 as they travel, spy, investigate and try to stop their nemesis, Colonel Olrik.

You’ll love this comic full of suspense if you enjoy science fiction, investigations and mysteries.

Created by the Belgian Peyo, les Schtroumps (the smurfs) are blue humanoids living in mushroom-shaped houses in an enchanted forest where they do their best to fight the evil Gargamel and his cat Azraël.

This is the comic book to read if you feel like studying French adjectives because all Schtroumps are named according to their personality.

Created by Clark and Gilson, the French comic Mélusine relates the life of the red-haired and kind-hearted witch Mélusine during her au pair experience in a castle.

Far from the exciting and magical life she expected, her life in the castle is mostly dedicated to mindless chores and boring alchemy.

Luckily, the young witch also goes to magic school where she regularly over delivers and often interrupts classes with embarrassing accidents.

The cult series of comics Bécassine started as a filler for a blank page in a magazine but ended being so popular that it became a complete comic series, a TV show and was even the subject of a song by Chantal Goya.

Bécassine, a young housemaid from Brittany was first depicted as the stereotypical naive provincial girl in order to please the Parisian readership of the magazine before being depicted more favorably as the comic grew in popularity.

Published 25 years before Tintin, this French comic is considered the first modern bande dessinée (Franco-Belgian comic) and its drawing style inspired the adventures of the famous reporter.

Created by Zeuf, the popular Swiss comic series Titeuf tackles themes such as sexuality, girls and seduction through the eyes of Titeuf, a 8-year-old boy who often questions the world of adults and tries to find a way to seduce Nadia, the girl he secretly loves.

Cédric is a Belgian comic series written by Raoul Cauvin and illustrated by Laudec.

His moody girlfriend, nosy parents and the teacher he’s in love with confuse Cédric who finds his life as a little boy rather complicated.

Luckily, Cédric’s grandpa is always ready to help and guide him through childhood.

When he wakes up in the eastern United States, XIII doesn’t remember who he is.

The only hints? The number XIII tattooed on his arm and the picture of himself with a woman.

Created by Jean Van Hamme and William Vance, this thrilling Belgian comic (and now TV series) is dedicated to XIII’s quest for the mysterious truth.

After the murder of his father Nerio, Largo becomes the head of the gigantic W group and discoverers the corrupted world of finance.

Each story is published as two separate volumes.

In the first one, Largo usually faces an impending disaster as someone tries to steal control of his company from him, in the second, Largo solves the problem and eliminate his opponent, temporarily, at least.

Written Philippe Francq and Jean Van Hamme, this series of comics will make you hold your breath while you wonder what’s about to happen.

Mixing Norse mythology, Atlantean fantasy and science fiction this Belgian fantasy comic book by Jean Van Hamme and graphic artist Grzegorz Rosiński is one of the most popular of the genre.

After the crash of his spaceship on earth, Thorgal is raised by Vikings who despise him for his morality and lack of parents.

As if that wasn’t enough, Thorgal and Aaricia, daughter of the King of the Vikings of the North clearly like each other.

Walking on water, teleportation, turning water into ice; these are only a few of the unique powers the humans of Troy have in this French comic series written by Christophe Arleston and drawn by Didier Tarquin.

Lanfeust’s power, melting metal just by looking at it, makes him the ideal blacksmith, but his life suddenly changes when he touches a mythical sword and discovers he now has all the powers of Troy at his disposal.

Curious to learn more about his power, Lanfeust undertakes a dangerous journey to the University of Magic in Eckmü.

Named after the ancient capital of the Persian Empire, Persepolis is a French comic like no other.

Written as an autobiography by Marjane Satrapi, the series shows her growing up in Iran during and after the Islamic revolution.

The story serves as a fascinating history lesson dedicated to a country many know too little.

No article dedicated to French comics would be complete without a mention of Boulet, one of the first French cartoonists to publish a webcomic.

Boulet takes ordinary situations and turns them into extaordinary comics you’ll enjoy reading both in French and in English.

Yes, you read that right, Boulet’s comics are available on his website both in French and in English.

Add to that a hint of nostalgia and lots of references to old video games and you get the ideal comics for French learners.