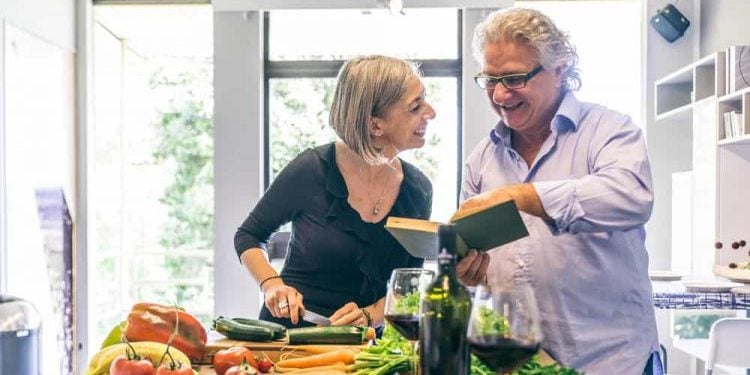 Whether you’re a budding chef, enthusiastic foodie, or just trying to expand your knowledge of the French language and culture, there are two main kinds of French cooking vocabulary you need to know: cooking words commonly used in French recipes, and French cooking words that have been borrowed into English.

Let’s look at the most common words from these two groups.

Here are some French cooking words you’ll commonly find in French recipes and other food-related writing.

Kitchen appliances and utensils in French

If you’d like to learn more French cooking utensil vocabulary, this extensive and very specific list is a helpful resource.

Most of these verbs can be used on their own, but in recipes, you’ll often see them preceded by auxiliaries like faire or laisser.

There may be some grammar behind that decision in certain cases, but it also seems to be due to politeness. It’s quite direct to say Cuis la viande, instead of Faire cuire la viande.

Note that the participles of most of these verbs can be used as cooking adjectives. For instance, farcir (to stuff) and farci(e)(s) (stuffed).  Many also have noun derivatives as well — for example, trancher (to slice), tranché(e)(s) (sliced), une tranche (a slice).

A number of French cooking words are also used in English. Some of these are highly specific culinary terms, but there are some that you’ll come across in recipes and on restaurant menus, as well as food-related books, podcasts, reviews, and so on.

Here are some of the most common of these terms, with their correct French pronunciation.
But note that since these words are being used by English-speakers, you may not hear them pronounced this way by everyone. Depending on your local culture, you may have to tone down your French accent when you say them in order to be understood.

Where can I find more French cooking vocabulary?

The words on this list are the most common French cooking words you’ll come across. But there are a lot more to discover, especially if you’re interested in cooking or baking at an advanced or professional level.

If you’re looking for more French cooking vocabulary, this webpage includes a list of extremely specific French cooking verbs (as well as many of the ones covered here).  And for cooking experts, this very extensive list could be useful.

What to know if you want to follow a French recipe

You’ve got the vocabulary to follow a basic French recipe. But there are a few other things you should know before you get cooking (or baking).

Most French recipes use the metric system.

Remember that most French recipes will use the metric system. Luckily, fellow Americans can easily convert these measurements into the empiric system by doing an online search or even asking a virtual assistant like Alexa or Google Home to do the conversion.

If you’re following a recipe with a lot of measurements, it’s a good idea to do the conversions and write them down before you get started.

You may have to substitute packaging or ingredients.

Another thing you’ll find is that some French ingredients are packaged differently where you live, or just flat-out may not be available. A good example of this is sucre vanillé ; where I’m from in America, it’s much more typical to use vanilla extract.

If you can’t find an equivalent ingredient or you aren’t sure of how much of a substitute to use, again, an online search will usually give you good results. Another technique is to see if a recipe for the dish you want to make exists in your native language. Even if you want to follow the French one, the native language recipe could shed some light on ingredient substitutions.

You can use French cooking/recipe videos, or even watch them for practice.

Many recipes aren’t just written down; countless professional, semi-professional, and amateur cooks make videos. These can provide a helpful visual aid, although if you don’t have an advanced level of French, or if you prefer to learn vocabulary by seeing it written down, written recipes may be a better option.

Still, French cooking videos are certainly an excellent way to hear these words and watch how the dish you’re interested in is prepared, so you could plan to follow a written recipe in French, but also watch a video that goes along with it, or even a video from another source, for practice.

Not all French recipes are traditional.

One last thing to know is that like many cultures, the current trend for French chefs of all levels of expertise is to “modernize” or do their own spin on traditional recipes. This can be a fun way to discover a new approach, but it’s not so great if you just want to make traditional coq au vin (trust me!). So, if you want to be sure that you’re following a traditional French recipe, do a search for [name of dish/dessert] and “traditionnel(le)”.

Another be sure you’re making the traditional version of a dish or dessert is to look it up on Wikipedia. Many typical French foods and meals have entries there, and you’ll usually find their typical ingredients (as well as regional variations) listed. You can keep that in mind when searching for your recipe.

Where can I find French recipes?

You don’t have to seek out a French cookbook or French chef to find a great French recipe. The internet is a perfect resource.

There are so many websites that feature French recipes, from French magazines’ websites, to lifestyle and cooking blogs, to French cooking videos on YouTube, to sites like Marmiton, where users post recipes (and rate them, as well).

You can even look for recipes with particular modifications by including terms like végétarien (vegetarian), sans gluten (gluten free), or my personal favorite, facile (easy), in your search. What a time to be alive!

In an article about French stereotypes, I shared what might seem like a sad truth with you guys: Although France is famous for its refined cuisine, not all French people always sit down to an exquisite, five-star meal at home.

In fact, while the average French person eats 75% of their meals at home, numerous studies show that as the world gets more fast-paced and global, French people are taking less time to prepare food. Nowadays, many families will sit down to at least a few frozen or pre-prepared meals in a given week.

This doesn’t necessarily mean junk food or TV dinners, though. For instance, Picard is a famous French chain that only sells frozen food. While some of it is junk food level, there are also tons of things like frozen veggies and lean meats and fish.

I hope that reading this doesn’t make you worry that French cuisine will disappear. The traditions are still alive, and people still continue to cook for their families, friends, and simply for themselves if they enjoy it.

And that goes for baking, too. In fact, making crepes or an easy cake recipe is a typical rainy-day activity for French parents and grandparents to do with young kids. (My family’s personal favorite is this gâteau au yaourt).

Do you have a favorite French recipe? Feel free to share it in the comments!