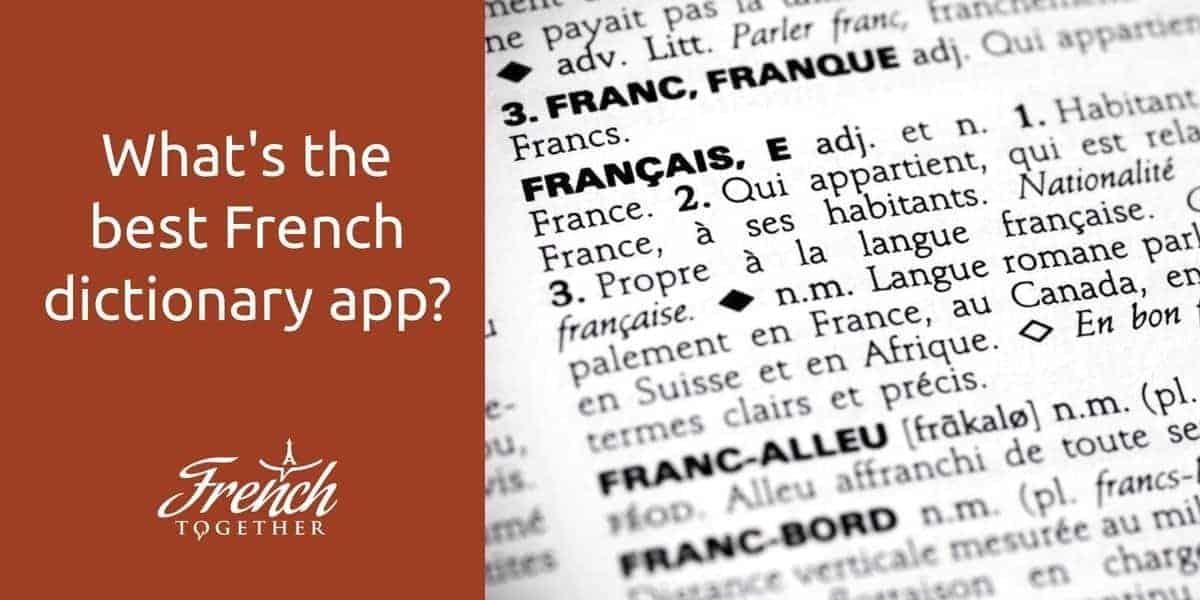 One of the most important tools you’ll need when you learn French is a French-English/English-French dictionary.

Whether it’s a print dictionary or an app you download and save on your phone, tablet, or computer, a French-English/English-French dictionary is a must. Even when you reach fluency in French, you’ll probably still need to look something up from time to time. I know I do!

But how to choose the right one for you?

Here, in no particular order, is our choice of the best French-English dictionaries in print and app form.

This massive, unabridged print French-English/English-French dictionary has a special place in my heart. I’ve had my copy (albeit an older edition) since I was a teenager learning French. It took many transatlantic flights with me in the years before I finally came to live permanently in France, which often caused my bag to be overweight!

Today, I still use it when I’m working on tricky translations or looking for a thorough definition of a word.

This is another classic staple for any modern-day French-learner and includes more words than the Collins-Le Robert app, which is especially important if you’re going to use your app for reading in French. The word count is the same for both the Android and iOS versions, which is nice and highly reasonable.

On the other hand, unlike the Collins-Le Robert, this app only seems to have verb conjugation tables, instead of a full-out conjugator, which may explain the lower price.

Like many foreign language speakers, translators, and teachers, I use the Word Reference dictionary almost every day.

Like the site, the app has a simple interface and is easy to use. Also like the site: you can consult and post questions on the forums.

Available for Android and iOS.

Available for both iOS and Android, this highly rated, popular app includes a voice search option, as well as other helpful features.

This is a good, basic, no-frills French dictionary app, with a simple interface. As of now, it’s only available for iOS.

While the first two French dictionary apps on this list are cornerstones, Ascendo seems to be the young upstart. Available for iOS and Android, this popular app has great reviews and its features and interface seem to be genuinely helpful.

The other suggestions on this list are easy to find, but this one – and any comparable dictionary – is a lot harder. Although it’s best to have an unabridged print dictionary at home, if you need to take one to class or on a trip, there are many paperback French-English dictionaries that will get the job done quite nicely.

Le Dictionnaire Le Robert & Collins Poche Anglais is available in France and includes a PC version as well.  But it doesn’t seem to be widely sold in places like the US or UK. The same goes for other abridged paperback French-English/English-French dictionaries that have been updated in the past few years.

That said, a visit to a real-life bookstore in your area may be the answer. Many bookstores cater to students and language learners and will sell these special resources. The same is also true for public libraries.

Some French-English dictionaries fit specific needs. Two of the most useful are travel dictionaries and pronunciation dictionaries. Here are are favorites in each of those categories.

Although dictionary apps make it easy to carry a French-English dictionary with you, I personally prefer to also have a small print one on hand whenever I travel abroad. This way, you don’t have to worry about internet connection, your phone’s battery level, weather or other conditions, or potential theft (sadly, print books aren’t usually targets for thieves and pickpockets). A French-English travel dictionary won’t contain every word in French, but it will provide a decent amount of vocabulary, as well as sections on specifics like helpful phrases, food, and so on.

The Lonely Planet French Phrasebook & Dictionary is probably the best print French-English travel dictionary I know of that’s still published today. In addition to a 3500 English-French/French-English dictionary, this pocket-sized resource also contains things like tips on French culture and specific sections to help you understand French menus and communicate in case of an emergency.

If you’re still not convinced about having this book in print, it’s also available as an e-book you can save on your phone, tablet, or e-reader.

Most of the dictionary apps on our list include audio so that you can hear how a word sounds. But if you want to take your French oral and aural skills to another level, you should think about downloading or using a French pronunciation dictionary.

Some of these apps also have interactive elements, like being able to ask native French speakers to pronounce particular words or sentences for you.

Benjamin reviewed several French pronunciation dictionaries in this article. The standout for him was Forvo, which has the most entries of any French pronunciation dictionary. Available for iOS and Android, or even simply usable via its website. Forvo features audio of individual words as well as some sentences, that interactive capability I mentioned earlier that lets you ask native French speakers to pronounce something, and even French lessons.

Price: Free. Offline?: At the time of this writing, the iOS version of the app has an offline version, but the Android version doesn’t.

Keep in mind that the most important feature of a French dictionary app is offline accessibility. After all, you want to be able to use it even if you don’t have internet access or have a bad connection.

Should I choose a dictionary app or a print dictionary?

There are advantages and disadvantages to each French-English dictionary format.

Some advantages of French dictionary apps include:

Some disadvantages of French dictionary apps include:

As for print print French-English/English-French dictionaries, advantages include:

Some disadvantages of print French-English/English-French dictionaries include:

So, should you get a print French-English dictionary or an app? For me, the answer is…both!

I love using French dictionary apps like Word Reference, but I’m also very glad to have my unabridged print Harper-Collins French/English dictionary as well. I get the best of both worlds, and since my dictionary app doesn’t cost anything, it’s like getting two for the price of one.

Two French references – or even more than two – can be a great way to verify tricky words or phrases, or to find information (for instance, etymology) that’s in one but not in the other. So, why not take advantage of old-school pages and new-school screen displays when it comes to your French resources?

Do you have a favorite French dictionary app or pronunciation dictionary? If you do, I’d love to hear about it in the comments. If not, I hope this list is a good jumping-off point for finding the perfect one for you!