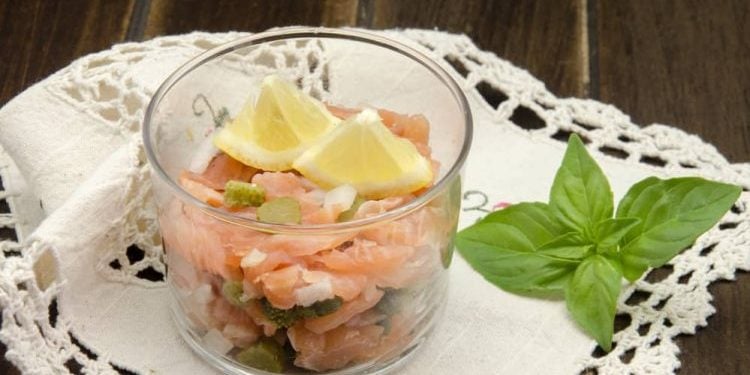 If you’re a native English-speaker, this article may not exactly be what you expect. That’s because the word entrée is one of the most notorious French-English faux-amis.

In American English (and in the English spoken in some parts of Canada), an entrée is a main course, and in British English, it’s the dish that’s served between the first and main course

But in French, it’s an appetizer or starter. Still, while that may mean smaller portions, when it comes to French entrées, you won’t find anything lacking in the taste department!

Let’s learn all about French entrées, from the origin of its English misnomer, to what some typical French entrées are like, and which ones the French like best.

Contents
1 Where does the word entrée come from?
2 Why does entrée mean “main course” in English?
3 How are entrées served in France?
4 Do the French serve entrées at home?
5 12 typical French entrées
6 Where can I try French entrées?

Where does the word entrée come from?

As French cuisine began to develop during the Renaissance, so did the idea of different ways of serving multi-dish meals.

The word “entrée” is first recorded in a French cookbook from the 1530’s. The word was part of the phrase entrée de table – the dish that marked diners’ entering the dining room and sitting down to eat.

Why does entrée mean “main course” in English?

It’s not easy to find a clear explanation for how entrée became a faux-ami. According to one source, it may simply be that as cookbooks and resources became more common in the 16th and 17th centuries in France, the word started to be used to describe dishes in general.  Maybe this is when English-speakers began to use it.

In fact, this theory is backed up by the fact that, according to the same source, by the mid-17th century, the entrée became the dish that was served second during a formal meal, after the soup. In British English, formal dinners still have the entrée as the second course, not the first.

The word found its proper place in the French language again when service à la russe – the concept of serving one dish after another, rather than setting out most of them all at once – became a thing in the 19th century.

Go to any traditional French restaurant today and you’ll see a section of the menu dedicated to entrées – starters/appetizers.  Or order un menu à prix fixe: the entrée is the first dish you’ll be served.

How are entrées served in France?

Entrée is a word that’s only used at restaurants or formal, sit-down meals at someone’s house.  As we’ve seen, the entrée is the first dish served during one of these meals.

At a restaurant, you can order an entrée of choice, but it can also be part of un menu à prix fixe (fixed price) menu. There are two standard types of menu in traditional French restaurants (although there can be some additional options, depending on where you go). These are:

Since it involves more courses and food, the second option will be slightly more expensive than the first.

By the way, for English-speakers, a menu is a list of food and other items served at a restaurant. In French, it can mean that , too (although carte is more typically used to signify a physical menu that you hold or look at). But it can also mean a special or fixed price menu, or meal deal/plan.

You may also see the word menu used in the phrase le menu du jour – that means the daily special.

Do the French serve entrées at home?

The term entrée tends to be relegated to restaurants or sit-down dining in French. If you have lunch or dinner at a French friend’s house, and they serve multiple courses, the first one is an entrée.

On the other hand, if you’re invited to a French person’s house for an informal meal, or just to hang out and maybe have a bite, something like an entrée will probably be served, but it will be called something different, since it won’t be formally served at a dining table.

For instance, say your French pal is ordering pizza, but before it gets there, she offers you a drink and sets out some chips, olives, or toast with different spreads. This would be un apéritif (often called un apéro for short) — a pre-dinner drink (or two….), usually served with some snacks, like chips, nuts, or olives.

Or say your French friend is hosting a party where she’s made a main course, but the appetizers are on plates around the room, for everyone to pick on and socialize.These are known as amuse-bouches (literally “amuse- (the)mouths” or amuse-gueules (a more informal, slightly vulgar version of the term).

You may also hear hors d’oeuvres, although personally I find this word less used in French than it is in English!

You can find out more about these variants of entrées in this article.

Go to enough French restaurants and you’ll discover that there’s a lot of variety when it comes to entrées. A menu is likely to feature a few traditional, typical ones, and maybe some house or regional specials, too. The food may be presented in a typical way, or it may be plated or prepared in a trendy, artsy style.

The French entrées you’re most likely to find on a typical menu include:

These are usually served sliced in half length-wise, with the mayonnaise artfully arranged on top of each slice. They may seem elegant and refined, but in everyday French life, hardboiled eggs with mayonnaise is a popular snack.

This is one of the best-known French entrées internationally. Often served on a planche (wooden board), the amount and variety of cured meat depends on the restaurant. Pâté may also be included.

Charcuterie plates are usually served with pickles, butter, and thick slices of baguette. As this implies, the typical French way to eat them is to put some of the sliced meat or pâté onto a piece of buttered baguette. Top it off or eat it along with a pickle.

Depending on your cultural background, pâté may seem horrifying, but it’s actually delicious. Pâté is typically made with meats like pork, fowl, or duck. Pâté de campagne (country pâté) is the variety you’ll most often see on  a menu; this is usually made with seasoned pork.

In some countries, “pâté” evokes an idea of exotic luxury, but in France it’s considered a cheap treat that people often buy in jars at the grocery store. It’s a less expensive, bolder-tasting alternative to foie gras. This being said, some pâtés can be a bit pricier and more respected than others, and if you ever have the chance to eat someone ‘s homemade pâté, it’s worth a taste.  Like an assiette de charcuterie, pâté is often served with baguette, butter, and pickles in French restaurants.

You’re likely to see this famous luxury treat on the menu at a more high-end French restaurant, unless you’re in a place where it’s the local specialty. Note that pâté de foie gras is a pâté /foie gras hybrid and isn’t considered the real thing, although it’s still delicious.

At the grocery store, rillettes are usually found next to the pâté, but the texture is very different – similar to tuna salad. Rillette is typically made from pork or tuna, but there are other varieties, too.

Often called les escargots de Bourgogne or les escargots à la bourguignonne, this entrée is typically served in beurre d’escargot (escargot butter), a mix of butter, garlic, and parsley. Les escargots are often an item on the entrées section of a menu, since what you’re actually eating is pretty small, and you aren’t usually served more than a few snails.

Many French restaurants will have some kind of salad offering on their list of entrées, although salads aren’t as ubiquitous as they are in restaurants in the US.

Some salads, like the salade niçoise (salad with vegetables and tuna fish) or the salade parisienne (salad with hardboiled eggs, ham, and cheese) tend to be served as main courses, rather than entrées. Considering their ingredients, that’s understandable.

Sometimes you’ll also see  a choice of salade composée  (mixed salad (a general term for a salad with various ingredients)) on the list as well, but it will be a much smaller size than it would be if it were served as a main course.

And since we’re in the land of faux-amis, note that  salade can also mean “lettuce”, if you’re in a grocery store or at a market.

There are lots of varieties of soup that are eaten and appreciated in France. Typical soups you’ll find on a restaurant’s list of entrées include:

la soupe à l’oignon (French onion soup) – This dish has been around in some form since Ancient Roman times. It became popularized internationally in the 1860’s, and is still an authentic part of French life today. In fact, many French weddings, whose receptions traditionally last late into the night or even all night long, serve French onion soup as a sort of pick-me-up in the wee hours of the morning!

le potage – Bouillon. Lots of different vegetables, seasonings, and other ingredients can be added, depending on the chef.

Like steak tartare, salmon tartare is served raw. This might be a bit less daunting when you consider that raw salmon is also common in sushi and sashimi. Depending on the chef, tartare de saumon can be flavored with different seasonings and sauces, including cream or lemon.

As you can see from this list alone, these can be prepared in many ways.

la tapenade (a paste of olives, anchovies, capers, and seasonings)

This spread is a very popular entrée in the south of France, especially.

Often referred to informally as tomate-mozza’, this very simple dish is what as described: slices of tomatoes and mozzarella cheese, usually drizzled with olive oil and seasonings. It’s an Italian dish that has become a part of the French entrée and amuse-bouche canon, especially on hot summer days.

Popular as these entrées may be, you aren’t likely to find all of them on a single restaurant’s menu. French restaurants tend to focus on a few dishes, rather than an enormous menu.

You also may not find them in their traditional form, as described here. Just like in other places around the world, some French restaurants like to offer more experimental spins on typical dishes.

Where can I try French entrées?

Did this list make you hungry? If you don’t have a French restaurant nearby, the good news is there are lots of recipes online – in French and English – that will help you prepare your own French entrées. You may also be able to find certain products, like pâté and different cured meats, at your local grocery store, a specialty shop, or online.

If you’re an adventurous cook (or even if you’re not; after all, it’s not hard to slice some mozzarella and a few tomatoes), why not treat yourself to some French entrées? Bon appétit !