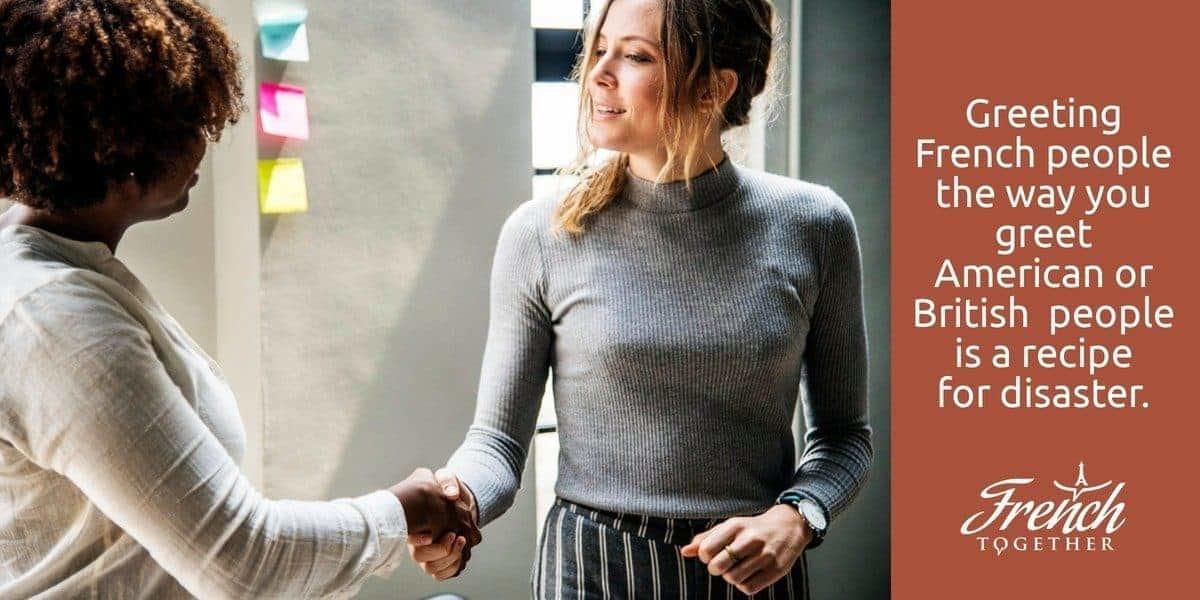 Greeting French people the way you greet American, British or even Spanish people is a recipe for disaster.

You see, the French follow a strange greeting ritual and breaking its unspoken rules is guaranteed to land you into the “rude tourist” category.

Luckily, greeting the French like a local is simple once you know a few basic principles. These are the secret rules you’ll discover in this article.

Table of Contents
#1 Being overly enthusiastic
#2 Using the wrong politeness level
#3 Entering a shop without greeting the seller
#4 Saying hello instead of bonjour
#5 Using how are you as a greeting
#6 Hugging instead of kissing
Have you ever made a French greeting faux pas? 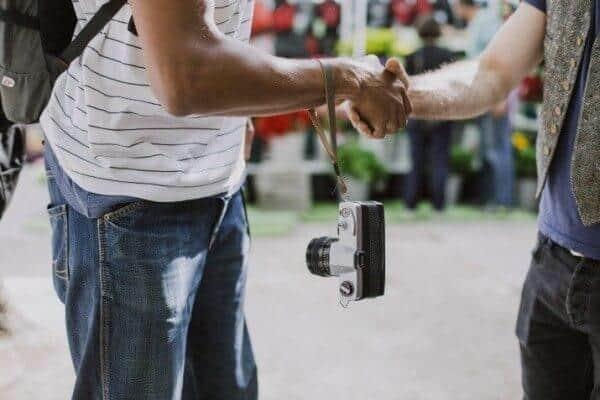 When you arrive in France, the first thing you will notice is that French people don’t smile as much as Americans.

They’ll greet you with a friendly “bonjour” (hello, good morning) but won’t run to you and say ” “thank you so much for visiting our store, we can’t wait to see you again”.

In France (and in most European countries), treating strangers like friends will raise eyebrows and leave people wondering what you want.

The French enjoy good service as much as you do but they also enjoy privacy and being left alone when they eat and shop.

This doesn’t mean you should expect shopkeepers to be cold, grumpy creatures but simply that they’ll generally leave you more space than American shopkeepers and only come to you if you want them to.

In English, you can ask “what are you doing?” to a child, your boss or your best friend.

Things are more complicated in French.

When you speak French, you choose between the formal “vous” and the informal “tu”.

Think of it as the difference between “what are you doing?” and “what’s up bro?”.

You can use the first one with anyone but the second sentence, used in the wrong context, would offend people.

#3 Entering a shop without greeting the seller

On my first trip to Russia, I was surprised to see that many people enter shops without greetings the sales person.

At first, I thought “wow Russian people are so rude!”.

Then I realized that’s simply normal in Russia and isn’t considered rude at all.

In France, it’s the opposite.

You should always greet the seller when you enter a shop.

If the person is on the phone or seems busy, simply nod.

When you leave, make sure you say “au revoir” (goodbye).

#4 Saying hello instead of bonjour

Want to bring a smile to French people’s faces?

You don’t need to speak perfectly, you don’t even need to be able to hold a conversation.

You just need to say “bonjour” (that’s French for hello).

It sounds obvious but I hear lots of people enter French shops and say “hello”.

Sure, that’s better than nothing but it also screams “I care so little about your country and culture that I’ m not even going to bother learning how to say “hello” in French”.

People are much friendlier when they see you make an effort to speak their language. A few basic words go a long way.

I saw how true this was when I was teaching French in Korea.

Every time I entered a shop, the sales person had a look that probably meant something like “great I’ll have to speak English now and sound ridiculous”. But as soon as they heard me speak Korean, they would suddenly relax and become super friendly.

When you greet them in French, you make yourself vulnerable and show you care, this is often all it takes to convince them to try to speak English.

#5 Using how are you as a greeting

In the US, it’s common to say “how are you” when you greet someone…without expecting an answer.

When French people ask “how are you”, they usually expect an answer.

I say “usually”, because young French people who have watched lots of American movies and speak English well (yup they exist) sometimes use ça va ? as a greeting too.

#6 Hugging instead of kissing

When you meet someone in France, you have three options:

If you’re a woman, you usually kiss friends, family members and sometimes acquaintances.

If you’re a man you only kiss people of the opposite sex.

These are of course general rules and depend on your environment.

For example, I always kiss members of my family on the cheek, whether they’re men or women.

Hugging is only an option with close friends and family.

If kissing is awkward for you, remember that hugging is equally awkward for French people.

In France, you hug your special one, sometimes close friends, but that’s it.

Most people will feel uncomfortable if you try to hug them. It’s considered too intimate.

In fact, there is no word for “hug” in French. The closest French word, “câlin”, has a romantic meaning and is closer to “cuddle”.

Have you ever made a French greeting faux pas?

Greetings French people without offending anyone may seem like a daunting task, but you’ll quickly get used to it after only a few hours in France.

And don’t worry, people know how intimidating the greeting kiss can be, they won’t be mad at you if you avoid it.

Have you ever made faux pas while greeting French people? What do you find the most intimidating about French greetings?

Answer in the comments below this post! I look forward to reading you :).