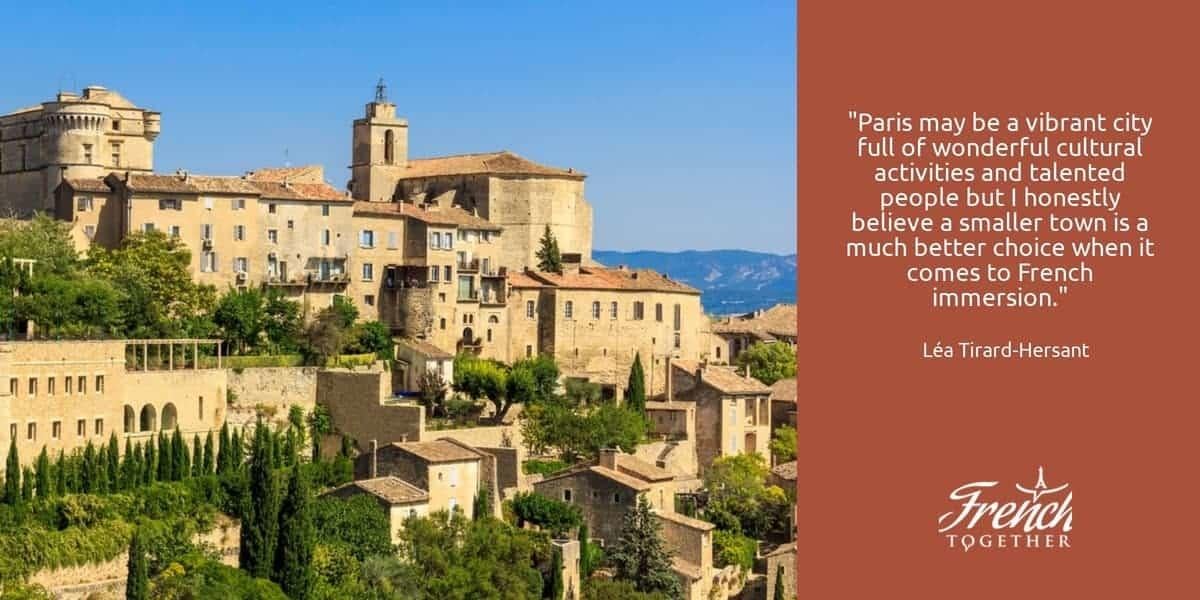 So, you’re feeling ready to immerse yourself in French life to take your French to the next level. C’est génial! Now it’s time to decide where to go. While many people start with the idea of living in a large city, the smaller towns of France offer advantages as well when it comes to French immersion.

This article is dedicated to Heidi, an American exchange student who chose to stay several months in a pretty small town in western France named Angers (pronunciation /ãzhay/, a bit like “angel”).

This article was written by Léa, a talented private French teacher and linguist. If you are looking for a more advanced French course, I highly recommend checking out The Staircase, her method for French and Spanish learners.

When I met Heidi during our lessons (I’m an online French teacher) and when she shared her memories of her time in Angers, I could see the joy and positive feelings on her face. Her memories of this small town seemed to be so vivid and positive, and she seemed to tightly associate all these pleasant feelings to the French language.

My other students who stayed in Paris, o the other hand, complained that the Parisians were rude and that they felt lonely, Heidi’s French immersion in this small town seemed a much better experience.

Paris may be a vibrant city full of wonderful cultural activities and talented people but I honestly believe a smaller town is a much better choice when it comes to French immersion.

In big cities like Paris, conversations flow smoothly since you’re surrounded with expats, exchange students and other English speakers.There are also lots of educated French people who speak good English. You will feel more at home and are less likely to feel homesick.

This may sound great but there is one huge drawback:  instead of speaking French with you, many Parisians will be trying to improve their English. The trick is to be stubborn and answer in French anyway. But it can be frustrating and make your French immersion less immersive.

In smaller French cities like Angers, steering your way through conversations only seems possible if you speak the language so you won’t be tempted to switch to English.

While you might often find yourself getting tongue-tied, there’s no better way to enrich your vocabulary than to interact with the native French speakers.

And because the population isn’t as enormous as in the capital city, building meaningful relationships can come more naturally. With small towns being home to fewer foreigners, locals are usually quite eager to share their culture with you.

Other larger cities like Marseille, Bordeaux, Lyon and Lille are bursting with modern-day culture, which has some perks. There will undoubtedly be live music, theatre and other cultural events.

However, cities are generally the first part of a country to become internationalized. Quite a few of these events will be in English, or the people attending will be English speakers so you may find it harder to speak French.

You will better experience the French lifestyle in la province

It’s sometimes difficult to experience what many people think of as the ‘real’ French way of living in a cosmopolitan city because city dwellers are busy.

While big cities like Paris offer exciting experiences, enjoying Sushi with your newfound Irish friends can drift you away from your French-language goals and won’t help you learn French as well as surrounding yourself with other people who are committed to learning and practicing the language.

In a small town, you’re likely to get to know a more traditional way of life. People tend to go about their lives at a much slower pace and focus on getting to know each other.

Because there are fewer distractions, focusing on your learning goals can be easier as well, although the lack of entertainment might be challenging if you’re accustomed to big cities.

Are you preparing for an immersion stay in France? I will be happy to help if you have any questions. Please post them below in the comments. You can also share your anecdotes and personal stories!

Originally from the Loire Valley, Léa is a French private teacher, linguist and active contributor to The Staircase. It's common to meet Léa at language learning events such as the Polyglot Gathering and Langfest in Montreal.

14 thoughts on “French Immersion: Why You Should Avoid Paris (And Choose a Small City Instead)”