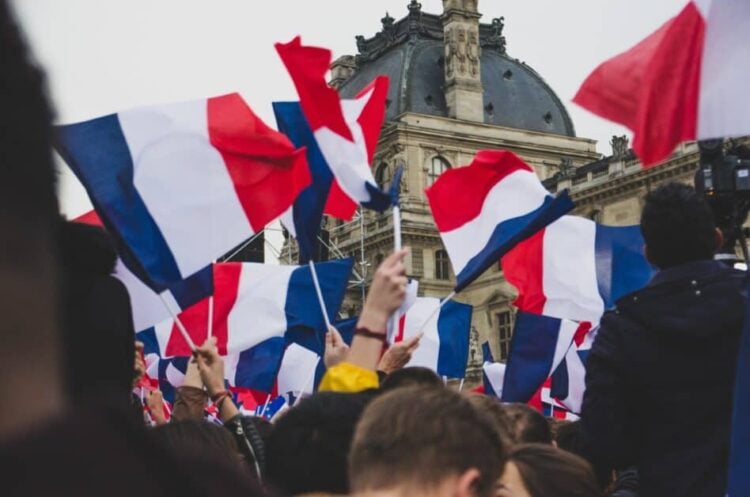 It turns out there are several fairly common ways French people refer to themselves and their language.

Let’s look at how to say “French” in French!

5 ways to say “French” in French

1. The most common way French people are called

“Les Français” is the most common way French people are called. It translates to “the French” or “French people.”

To say “a French person”, you would say Un(e) Français(e). This can be used in formal, informal, and professional situations.

It sounds simple but there are a few important rules to follow when referring to French people….

Rule #1: Capitalize it when it means “a French person”

French doesn’t use capitalization as much as English does, even with words indicating nationality. But one exception is when saying the equivalent of “French person/Frenchman/Frenchwoman”.

You’ll often see this word used in plural form to refer to all French people. For instance: 33% des Français ont un chat comme animal domestique. (33% of French people have a cat for a pet.)

Rule #2: Keep it lowercase when it’s an adjective

When describing someone or something as “French”, on the other hand, keep the word lowercase.

Or: Il trouve que la langue française est la plus belle au monde. (He thinks that the French language is the most beautiful in the world.)

Rule #3: Keep it lowercase when it means “the French language”

You probably know this already, because you’ve probably said or written something like: Je parle français or J’apprends le français.

Un ressortissant français or une ressortissante française means “a French citizen” and is often used to refer to both residents of France and French expats — anyone with French nationality. This is a term that you’ll often find in official documents or formal writing. You probably won’t use it in everyday speech.

Un/une Franchouillard(e) is a slang term that originated in the early 20th century as a gently teasing way to refer a French person, the idea being that they might be ridiculously patriotic and/or stereotypical (according to the French’s own stereotypes about what it means to be French ).

What are these stereotypes, you may wonder? If you ask most French, the stereotypical French person is probably a complainer, loves French food, and is fiercely proud of his or her country and language, among other things. Franchouillard may take things a step further by including additional negative perceptions like a person not being good at speaking foreign languages.

None of these stereotypes are true, of course – or at least, not 100% true, but they will come up when you talk to many French people about how they see their fellow countrymen (and -women).

Franchouillard is typically used in one of two ways:

● in a show of teasing pride in one’s stereotypical French qualities, a bit like Americans calling themselves ” ‘muricans”.

Franchouillard(e) can also be used as an adjective. In that case, as with the other examples on this list, its first letter becomes lowercase. Ex: Il vient d’une famille très franchouillarde (He comes from a very traditionally French family.).

How can you tell if this term is being used in a negative or positive, joking way? It usually depends on context.

When a French person refers to him or herself as un Gaulois or une Gauloise, they aren’t talking about the iconic French cigarette brand. The appellation Gaulois(e) refers to the ancient ancestors of the modern-day French. Les Gaulois (Gauls) is the general name for the Celtic peoples who inhabited France in ancient times.

Although the Gauls soon assimilated into other cultures, including the Romans, who conquered most of their territory in the early century AD (this is where the term Gallo-Roman comes from), their memory remains. For instance, certain places, including Paris, derive their names from the Gaulish tribes who once lived there.

The connection has also taken on a symbolic note. If you’ve studied the iconic Astérix comics in your French classes, you may have learned that the Gauls in this story are stand-ins for the modern-day French, who are fighting to maintain their traditions and way of life against the tide of globalization (symbolized by characters from other ancient cultures).

The comics continue a centuries-old attachment of the modern-day French people to their ancient roots.  The trend started around the late 1700’s/early 1800’s, when Celtic cultures were being studied and newly appreciated (this Wikipedia article points out that shortly before, Enlightenment philosophers thought of them as shamefully barbaric).

Referring to oneself as Gaulois(e) today shows an overt sense of patriotism, maybe even a feeling of superiority over other cultures. So it’s probably not ideal to refer to a French person as a Gaulois(e), unless they say it themself – or if you’re talking about actual historical Gauls…or a character in the Astérix comics.

Keep in mind that un/une Gaulois(e) is capitalized, but when using the word as an adjective, it begins with a lowercase letter.  For example: Astérix, un Gaulois, habite un village gaulois. (Asterix, a Gaul, lives in a Gallic/Gaulish village.)

céfran means “French” in verlan, a form of French slang where syllables are reversed. In this case: français –> çais-fran. The word becomes céfran because verlan is written phonetically.

This term can be neutral, but it may also have a negative context, due to the cultural conflict between some native French people and the (French-born) descendants of North African and Sub-Saharan African immigrants. So, depending on who’s speaking, céfran can mean “French” or “a mainstream French person that I don’t relate to/like”.

The movie La Haine is an excellent way to start exploring this cultural conflict.

Céfran is familiar to many mainstream people as well as those who are “down” – however, like many slang terms, it may have fallen out of style among the truly cool, so it’s probably best to just recognize it, rather than to use it.

4 ways to say “the French language” in French

We’ve seen how the French refer to themselves. How about what they call the French language?

As we saw in the previous section of this article, français is the go-to word for all things French. That includes the French language.

Note that, unless it’s used at the beginning of a sentence, this word always begins with a lower-case “f” when it’s being used to talk about the language.

Note that although le français is the word for “French” as a language, the word is changed to its feminine form in this phrase, since it modifies la langue.

Interestingly, the French also use this format when referring to English, which they sometimes call la langue de Shakespeare.  According to this list, although it’s not at all as common to see them used with this formula, many other languages are associated with a gifted native writer, too.

The phrase la langue de Molière is mostly used in journalistic, academic, or fairly formal writing or speeches, rather than in everyday spoken language. It often serves as a way to avoid repeating the word français in something like an article or news segment (as a general rule, the French dislike repetition). For instance, this very interesting podcast episode from France Culture is entitled “Jusqu’où imposer la langue de Molière ?’’ (How far should we go when it comes to imposing the language of Molière on others?)

That said, the idea of associating a great writer with one’s language also exudes a sense of pride.

La francophonie is a term that differs slightly from the others on our list. This word essentially translates to “the French-speaking world” and was created to be inclusive while also acknowledging that not all French is the same.

After all, people from Quebec or Algeria or Guadeloupe or any of the thirty-seven other French-speaking countries, territories, and regions around the world don’t sound exactly the same when they speak French, nor do they always use the same words or grammatical structures.

La francophonie can also refer to French and French-related cultures in general. It can be a positive term or a negative one, depending on who’s speaking and what they’re trying to say.

Usually when la francophonie is being used as a negative term, it’s due to racist beliefs or because the speaker believes that acknowledging, accepting, and celebrating differences in the French language puts mainland French at risk.

Note that this word shouldn’t be confused with un/une francophone, which is a neutral, fairly formal term that means “French-speaking”.

If, like me, you don’t come from France, a French territory, or a French culture, and/or weren’t raised in a French-speaking household, you’re a francophone (French-speaker) but not officially a part of la francophonie, since French in any of its forms wasn’t your mother tongue.

Now you’ve learned how to say “French” in French whether you are talking about French people or the French language.

What’s your favorite term for “French”? Feel free to share in the comments!

1 thought on “How do you say “French” in French? With audio”