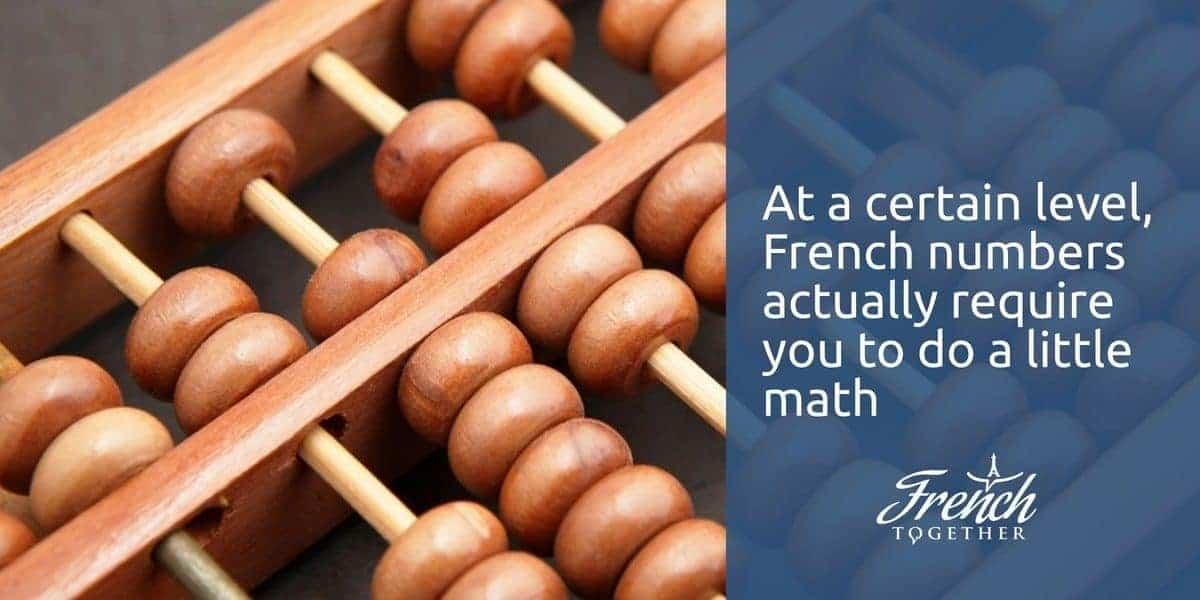 Numbers are undeniably important when it comes to interacting with other people, from telling someone how old you are, to finding out how much something in a store costs, to maybe even exchanging numbers with that cute Frenchie you’ve been chatting with.

French numbers aren’t quite as straightforward as numbers in English; at a certain level, they actually require you to do a little math.

But like any other kind of vocabulary, once you’ve memorized and practiced them, they will get easier.  I promise.

Let’s start with the basics: How to count from 1-10 in French.

Before we begin, the good news is, this set of numbers is just like those in many other languages: simply a word for each that you have to memorize.

Try getting to know these French numbers by repeating them a few times every day until you’ve got them down.

If you’re one of those people who finds your Zen by counting to ten, why not try doing it in French next time?

Now let’s take things to the next level: the teens.

The good news is, there is a French equivalent to the suffix “-teen” in English: the prefix dix-.

The only downside is that whereas “-teen” is used in English starting with the number 13, in French you’ll have to wait till 17.

In the teens, you’ll see the first examples of one of the essential rules of writing French numbers in letters: If there are multiple words in a number, they’re connected by hyphens.

As in English, when you get past 20 in French, you simply have to add the additional number after it. So, for example, 24 is vingt-quatre.

The only exception is with the ones.  When you add “un” to a number ending in zero, you also have to include the word “and” (et).  Can you guess how to say 21 in French?  That’s right: vingt-et-un.

Let’s look at how to write some of the numbers from 21-69 in French:

Pop quiz: How do you say “54” in French?  Take a guess, then check it with whatever method you prefer.  Did you get it right?

This is where that math I was talking about comes in. Instead of 70 being some form of sept in French, it’s soixante-dix. If you’re starting to get the hang of the numbers already, you’ll recognize that 70 in French basically translates to “60 and 10”.

If you’re a fellow math hater like me, maybe count to ten – or, preferably, dix, to calm and energize yourself.  Good?  Good.  Now, let’s move on to the numbers 80-89 in French.

Here, multiplication is the name of the game.

Instead of 80 being some form of huit, or even something like “soixante-vingt”, it’s quatre-vingts. Yep, that’s “four twenties” – in other words, 4×20.

Note that the “s” at the end of “vingt” drops off after 80. This makes sense when you think about it, but I can’t shake the feeling that it’s just another way to make things harder.

Also notice that, exceptionally, the “et” is gone in 81 (quatre-vingt-un). There’s no logic I can think of there.

The numbers 90-99 in French are going to kick it up a notch.  Instead of coming up with another name for “90”, we’ll just take quatre-vingt and add ten to it! And then, of course, follow the same rule we saw with soixante-dix, keeping the ones as teens.

Here’s how that works:

After 99, the French numbers get easier.

The word for “hundred” is cent.  Just like in English, when you count by hundreds, you simply add the number of hundreds before the word.

When you want to add a one or ten, it’s also pretty straightforward.  Just add the number after “cent”. You don’t even have to add “et” with one.  And, you no longer have to agree cent with the number of hundreds before it. Here are some examples:

When you reach 1000, things are even easier because the French decided to throw out the idea of pluralizing mille when there are multiple thousands.

The comma and period switcheroo

There is one special thing you will have to keep in mind when it comes to bigger French numbers: Instead of a comma, the French use a period to separate thousands (and other larger number values). So, 1.000 is mille (one thousand). 1.000.000 is un million.

Keeping these rules in mind, here are some examples of the thousands, ten thousands, and hundred thousands in French:

The big numbers in French

For even larger numbers, the same rules apply.  The only difference is that you now add un to a single unit (un million as opposed to cent, for example). Here’s how to say:

These big French numbers are fairly easy once you get the hang of them.  Just remember that every digit has to be accounted for.

Did you get it right?

Another thing to be aware of is that these larger numbers can sometimes be false cognates, so be sure you don’t get them confused with their English equivalents. This chart can give you some additional insights.

Are French numbers also used in Belgium, Switzerland and Luxembourg?

If you’re angry at all French-speakers right now, it’s really the French from France who you should blame.

This crazy number system comes from their ancestors, the Gauls, who measured things by twenties.

As a general rule, any country or territory that adopted French due to colonization (Quebec, Algeria, Senegal, New Caledonia….), uses this number system.

But French-speaking countries and territories that were not colonized by the French are much more reasonable when it comes to numbers.

Here is how the numbers 70-90 work in Switzerland, Belgium, and Luxembourg, as well as certain other areas that were either colonized by Belgium, or simply go against the grain (Democratic Republic of the Congo, Jersey, a small portion of southern Quebec….):

The numbers 70-99 in Swiss, Belgian, and other forms of French:

NOTE: You may also see “octante” instead of huitante, depending on the speaker and the region they come from. If there’s any confusion, you can usually just revert to the basic, non-regional French option of quatre-vingts, which pretty much all French speakers recognize.

Which number system to use, or Can I take the easy way out?

So, can you just forgo all that math, and use these simpler numbers instead?  If you’re focusing on the French spoken in the places that use them, the answer is, Pourquoi pas? (Why not?).

But if you want to speak French like a French person, or a French-Canadian, or, well, most of the French-speaking population of the world, the more complex option is the most used and recognized, so it’s best to stick with that.

There’s also the fact that, as I mentioned in the list above, most French speakers recognize the French-from-France  numbers, since they’re found in books, TV shows, movies, etc.

This being said, if you’re really in a bind in a conversation, your mind is blank, but suddenly, you remember septante, many French-speakers will understand you.

However, outside the areas where they’re normally used, these simplified terms for the 70’s, 80’s, and 90’s are perceived as a bit strange or even silly.

As an American, the reaction they seem to get is similar to what would happen if one of my countrymen (or -ladies) said “Cheerio!”  Most Americans know what that means, but it’s such a British word that it sounds weird coming from one of us, and it would be hard to take the person seriously.

How to memorize French numbers

A simple exercice to help you learn French numbers

In addition to the regular practice you get with the French Together course, a good way to memorize the numbers is to write down a few in digits – for example, 45, 36, 59, and so on.

Then, say or write down what each one is called.  Check your answer with the list of numbers written in this article, by searching online for “[number] en français,” or with this nifty site that lets you type a number in digits into the search bar, revealing the correct name and spelling with a simple click of the “OK” button. See if the result matches your answer.

When you’ve mastered the numbers, you’ll forget the rules

There are a lot of rules and unexpected exceptions when it comes to French numbers. But all’s not lost.

For one thing, another tough French rule – that of not pronouncing an s at the end of a plural word – is an asset here.

I’ve been living in France and speaking fluent French for over a decade, and although I use and say numbers pretty much every day, I had forgotten that many of them have an s at the end.

One numbers-related challenge I do encounter in everyday life in France is that you have to be sure you’re articulating when it comes to numbers that sound similar.

I usually have to pause and really concentrate on deux and douze.  Focusing on their different endings isn’t enough; French people seem to need you to really take the time to articulate the vowel combinations, as well.

From pain in the butt, to a reminder that you kick butt!

Okay, so I tried to be reassuring, then ended with another thing to worry about.

But really, it’s fine. The way to master French numbers isn’t by obsessing over how they’re spelled or why so much math is involved.  It’s about memorizing and, most importantly, using them.

Take a chance by trotting them out in the next French conversation you have (well, if it makes sense to do so, of course), and keep practicing with the French Together course and the other methods I suggested.  These things will really help.

As you start to get the hang of French numbers, you’ll probably still be a little nervous about using them for a while. And then one day, you’ll suddenly feel all right.  It happened to me, and it’s happened for all of my non-native French speaking friends.

Mastering the French numbers makes things a lot easier – and in a way, more exciting.

Here’s the thing: when the average French speaker uses numbers in conversation, they feel nothing.

But most of us non-native speakers feel a sense of triumph any time we do things like give someone our phone number without getting jittery, or effortlessly rattle off a meeting time.  It’s been years since I’ve been able to do these things, and I often still feel a little thrill.

If you’re thinking that this is proof that the French numbers are hard, it’s actually something I’ve seen my non-native English-speaking friends experience with numbers in my native language, as well.

As a general rule, numbers in any foreign language are tricky, for many reasons.  But like any non-native speaker, you’ll become a pro at them, with practice.

What are you most looking forward to about mastering French numbers?

7 thoughts on “French Numbers: How to count from 0 to 1 Billion | With Audio”