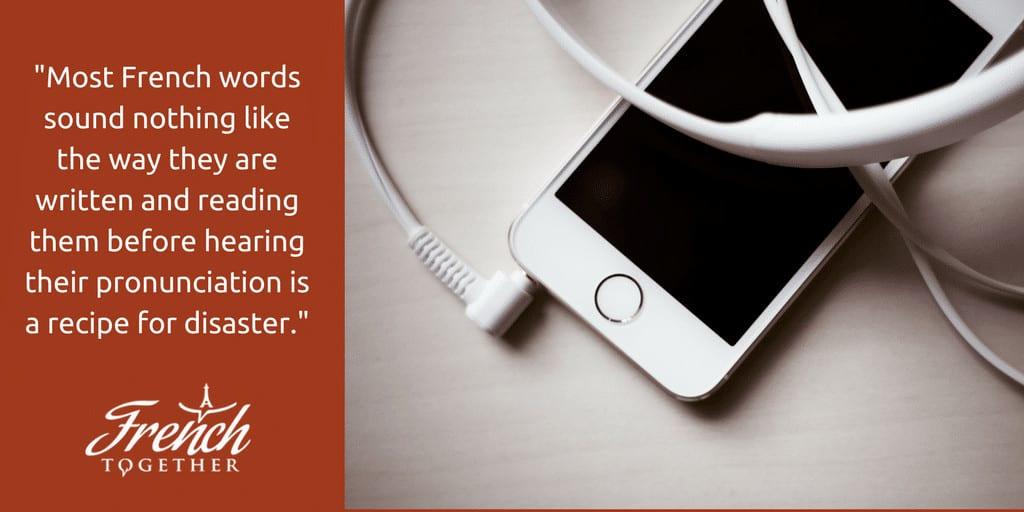 When you learn a new French word, it’s tempting to read it before you hear it pronounced.

This works if you’re a native speaker or already speak French fluently and have lots of experience with French pronunciation but not if you’re still a beginner or even an intermediate French learner.

That’s why it’s essential to always hear words before you see how they are written. In other words: learn with your ears, not with your eyes.

Here are a few free resources that’ll help you do that!

With millions of recording, Forvo is the biggest French audio dictionary. You can use it to hear words and short sentences pronounced by native speakers but also to ask people to pronounce words for you.

This is an excellent way to find example sentences and learn words in context, something I always recommend you to do.

In addition to the French pronunciation dictionary, Forvo also offers lessons in which you learn to pronounce the words related to events such as the French presidential election, le Tour de France or le Festival de Cannes.

With only 53667 recordings in 76 languages, Rhinospike’s database pales in comparison with Forvo’s but it does offer two unique features that make it a must-use tool for French learners.

Unlike Forvo which only offers recordings of words and phrases, Rhinospike also gives you the possibility to listen to long blocks of texts.

Another useful feature is the ability to ask for the transcription of video or audio files. If you have ever watched a Youtube video or heard a French song you couldn’t understand, you’ll love this!

Before you ask for recordings or for a transcription, make sure you also record or transcribe for other people. This helps you get priority for your requests.

Some recordings are clearly made by people who don’t speak French fluently and this could have a negative influence on your pronunciation.

It pains me to write this because the site still offers quality content but I would recommend you to avoid it unless your French is good enough to notice mistakes and tell whether a recording was made by a native speaker or not.

Created by Laura K. Lawless, Lawless French is one of the best resources to learn French grammar but it’s also full of useful lessons you can use for your French listening practice.

These lessons are often based on Youtube videos and centered around themes such as food, culture, comedy or history which makes them particularly engaging.

Think of it as a free FluentU or yabla alternative.

Laura also did an amazing work classifying the lessons by level which allows you to quickly find the best lessons for you.

I didn’t expect much from Google Translate’s text to speech service, to be honest.

I was convinced I would hear robotic voices speaking a language that sounds nothing like the French I love.

After putting Google to the test and asking the service to pronounce several sentences, I have to admit Google Translate’s text to speech service is a pleasant surprise.

Sure, the voices do sound robotic and devoid of emotions but their pronunciation is almost flawless which makes Google Translate a rather useful tool to hear the pronunciation of words you can’t find on Forvo or Rhinospike.

The famous French dictionary Larousse gives you the opportunity to hear native French speakers pronounce 50,000 French words on their website or with their paid iOs or Android app.

While you can’t listen to sentences, the huge number of recordings make it a useful resource.

Describing itself as an “online talking dictionary”, Dictionarist uses what sounds like Google’s text to speech to allow you to hear the pronunciation of lots of French words and sentences.

While Dictionarist’s audio isn’t extraordinary, the site does contain lots of example sentences you can use to learn words in context.

Just like Dictionarist, Bab.la offers lots of example sentences with one added benefit: the audio was recorded by native speakers.

The French Together blog offers lots of free French vocabulary lessons that come with audio recorded by native French speakers. Most of these lessons are focused on everyday French and will help you quickly learn useful French words and sentences.

If you prefer a more structured approach, the French Together course may just be what you need. Based on everyday French conversations focusing on the most common French vocabulary, the course contains audio recorded at slow and normal speed by professional voice actors.

And you? What’s your favorite French audio dictionary?

10 thoughts on “French Audio Dictionaries Put to the Test: Which One Should You Use?”