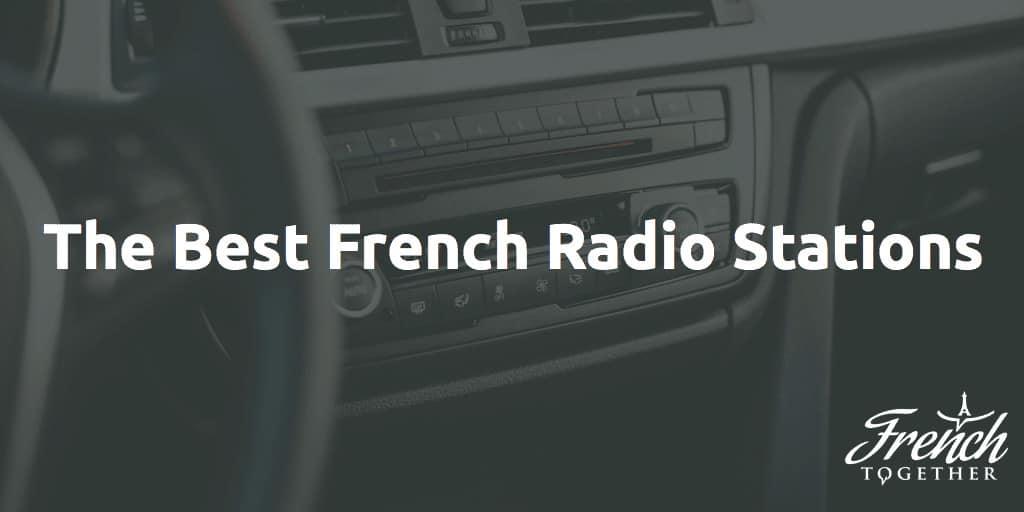 At least 40 percent of the music on private French radio stations must be of French origin.

That’s the measure decided by the French government to preserve French culture.

And that’s great news because it means you can listen to French radio knowing you’ll hear a fair share of French songs.

Whether you’re looking for great French music to listen to or would like to improve your listening skills, there is a French radio station for you, and this article will help you find it.

How to listen to French radio stations online

Most French radio stations have a website on which you can listen to them live but you may find it more practical to use one of the following apps to get access to a wider selection of stations.

If fast conversation and a mix of culture and news is what you’re looking for, France Inter is the French radio station for you.

Are you a bookworm? Listen to France Inter on Saturdays to hear authors and book shop owners from Swiss, Belgium, Canada and France discuss the latest books from their country in La Librairie Francophone.

Slower-paced than France Inter, France Culture is a great way to improve your French listening skills and prepare for your next passionate debate in French.

With topics ranging from news and economy to philosophy, music, and art, France Culture requires an advanced vocabulary and clearly isn’t for beginners.

Mostly known for its live comedy shows like Les Grosses Têtes (a daily show dedicated to news and culture), RTL (formerly Radio Luxembourg) is also the perfect general-interest radio to catch up with news and hear the latest hits from France and abroad.

Laughter and Songs, the name says it all.

With its regular comedy shows and constant joking around, Rire et Chansons is guaranteed to lighten your mood…provided you can understand the numerous cultural references and jokes.

On a more serious note…

Also a TV channel, BFM is all about business and economics.

This is the French radio station to listen to if you like to understand how the world economy works and enjoy hearing stories from entrepreneurs and economists.

Europe 1 helps you better understand what’s going on in France and in the world with debates about societal issues, a hint of politics and lots of interviews.

Fourth most popular radio station in France and main radio station of the Principality of Monaco, RMC focuses on general news and sport

Mainly known among French learners for its journal en français facile, a daily 10-minute podcast explaining the news in easy French, RFI is also one of most listened to international radio stations in the world with 35,6 million listeners in 2008.

Broadcasted in French and 12 other languages, RFI covers economic, cultural and diplomatic events as well as current affairs.

Europe 2 covers news and events with live interviews and lots of music.

If Québec French is the variety of French you’re learning, ICi Radio Canada Premiere is the radio station for you.

Its daily 60-minute news program, l’heure du monde, covers the most important events of the day with a charming Québécois accent.

France Info was the first French news radio station to be created and remains one of the most popular in France.

Its fast-paced live coverage of news makes it an interesting yet challenging station to listen to as a French learner.

Focused on local news from Montpelier to Nice, Sud Radio (South Radio) brings the sun of the South of France to its listeners.

A French learner once said that the best thing about Nostalgie is the ads, because they teach you lots of new words, and it’s true that you won’t learn much French on Nostalgie considering most of the songs they play are in English.

You’ll, however, rediscover the old-fashioned charm of the greatest hits from the 70’s and the 80’s.

Whether you’re a teenager or someone who would like to discover the life of French teenagers, Mov’ will make you vibrate with its mix of hip-hop and urban music.

Chante France (Sing France) is your daily dose of chanson française and other French songs.

After being almost suspended for a month in 1984 following a few issues with French authorities, NRJ is now the most popular private French radio station.

I remember listening to Skyrock for the first time as a teenager and thinking: finally, here is some music love.

I now hate most of the music Skyrock plays but you’ll love it if Rap, R&B and hip-hop are your cup of tea.

If radio stations like Mouv’, NRJ and Skyrock feel a bit too young for your liking, France Musique may just be what you need.

With its focus on pop music, love songs and romantic hits, Chérie FM (Darling FM) is the radio station you listen to when you’re in love (or just had your heart broken by a gorgeous French man or woman).

And you, what’s your favorite French radio station? I’m looking forward to reading your answer in the comment section below this article!