There is more to French cuisine than cuisses de grenouilles (frog legs) and escargots (snails).

In fact, many French people never ate these two dishes.

In this article, Akita Ropiquet shows you how to make some of his favorite easy French recipes from the comfort of your home and offers interesting cultural insights about each dish.

I encourage you to adapt the following recipes to your kitchen ustensils and the ingredients you can find in your country.

Make it your own and enjoy!

La blanquette is a traditional French dish made with meat, carrots and a butter sauce.

The main character is a secret agent from France. But the movie is more a parody than a French adaptation of James Bond.

Each time OSS117 (the main character) has to report to his boss or meets another secret agent he uses the following code:

OSS117: – Comment est votre blanquette ? (How is your blanquette?)

You can watch the scene here

What you need for a blanquette de veau for 4 people

You can also add celery, mixed herbs and parsley.

How to make blanquette de veau

Le Cassoulet is a regional speciality from Languedoc, in the South of France. It’s made with white beans, meat and tomatoes.

There are many ways to make a cassoulet because a lot of towns have their own recipe.

In 2008, when Obama was elected for the first time, some French journalists went to Times Square in New York and waved a big banner with the word Cassoulet.

These journalists were part of the popular Le Petit Journal. It’s a comedy news show where they make fun of the news, politicians and famous people.

For a cassoulet for 4, you need

How to make cassoulet

This traditional French dish comes from Savoie. It’s an oven dish with melted cheese on top.

It’s made with potatoes, lardons, onions and Reblochon, a typical cheese from Savoie.

Ingredients for a Tartiflette for 4

How to make tartiflette

You can serve with some lettuce and red wine.

Les crozets are a kind of pasta from Savoie. They are square, small and thick.

The following recipe is an oven dish with melted cheese on top and crozets inside.

To serve Crozets for 4 you need

How to make crozets

You can eat it with some lettuce.

Les galettes de sarrasin are savory crepes made with buckwheat flour. It’s a typical dish from Brittany and one of the easiest French recipe to make.

To serve 10 galettes you need

You can also pour a little beer to add some flavor.

Preparation: ~30-60min (without the resting period)

How to make galettes

The kind of ingredients you put inside are up to you but we usually eat galettes with savory food.

Try it with some ham, cheese, eggs, vegetables, meat, …

The most typical galette here in France is la complète (literally the complete). It’s a galette with ham, grated cheese and an egg.

When you go to Rennes or Brittany, you will find galettes saucisses (saucisse is French for sausage).

These are galettes rolled around a big sausage. If you go see a game of the local soccer team Le Stade Rennais, you will see a lot of people eating some galettes saucisses around the stadium before the game.

There’s even a song about galette saucisse that you will hear in the stadium before the game. 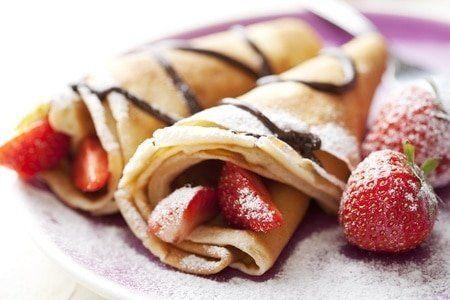 After eating galettes, you can finish your meal with crêpes, another traditional French recipe.

The main difference between crêpes and galettes is that galettes use buckwheat flour.

To serve 10 crêpes you need

You can also pour a little beer to add some flavor.

Preparation: ~30-60min (without the resting period)

How to make crêpes

A glass of cider is the perfect beverage to drink with crêpes.

I hope these easy French recipes made you salivate. Now time to go shopping and let France enter your kitchen!

Have you ever tried these recipes? How was it? Tell us in the comment section bellow!

Hey there, I’m Akita. I’m French and I blog at Buffet Français. I give French learners actionable tips and delicious recipes to take their French to the next level. I’m also an avid language learner and I speak English, Spanish and Italian (and French of course!).