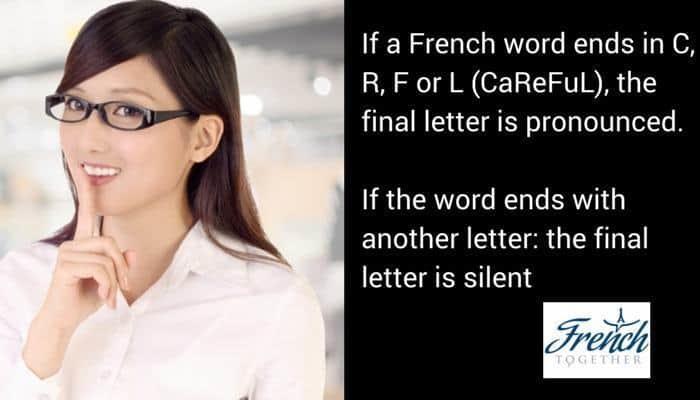 There is no way to know whether you should pronounce the final letter of a French word or not.

That’s at least what most French textbooks say.

Luckily, this isn’t entirely true. It turns out there is a formula that can help you know whether you should pronounce the last letter of a word or not.

And you want to know the best? It’s easy and works in the majority of cases. You didn’t expect a French rule to work all the time, did you? :).

Table of Contents
Meet the CaReFuL rule
Should you pronounce the end letter of these words?
I’m still not sure whether a final letter is silent or not
Over to you

To know whether a final letter should be pronounced or not, think about the CaReFuL rule.

If a French word ends in C, R, F or L (the letters in CaReFuL), the final letter is pronounced.

If the word ends with another letter, the final letter is silent

Should you pronounce the end letter of these words?

Now that you know the theory, let’s see how it works in practice.

The final letter is a „c“ so you pronounce it.

The final letter is a „r“ so you pronounce it.

The final letter is a „t“, so you don‘t pronounce it.

The final letter is a „s“ so you don‘t pronounce it.

You do need to link “champs” and “Elysées” together though. This is what we call liaisons.

If you ever have a doubt, you can always:

21 thoughts on “Should You Pronounce the Final Letter of French Words?”