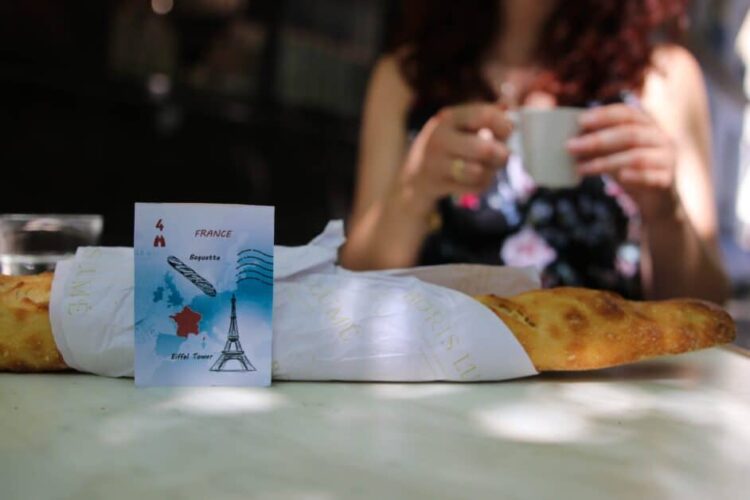 Like people of just about any culture, the French have quite a collection of manners that revolve around eating. Some probably aren’t that surprising – for instance, as in other Western cultures, polite French people eat most meals with a fork, knife, and, when necessary, spoon, and you never start eating before your hosts.

But other aspects of French dining etiquette can be a little more…unique.

Here are six French table manners that might surprise you!

Table of Contents
1. Don’t cut the baguette!
2. Keep your knife and fork in hand
3. Hide your napkin
4. Don’t cut lettuce – fold it!
5. Don’t eat too quickly
6. Use fork, knife, and menu placement to communicate with waitstaff
Where can I learn more about French table manners?
An important thing to keep in mind about French dining etiquette

In some cultures, bread is cut, either beforehand or when passing it around to fellow diners. Not so in France. Baguettes are an important part of many French meals, and they’re always kept whole and passed around as needed, with each person breaking off a piece.

Restaurants are often an exception to this rule, serving pre-cut pieces of baguette in a nice little basket. But if you’re eating at someone’s home, expect to break off your own piece of baguette.

2. Keep your knife and fork in hand

One of the trickiest French table manners for Americans like myself to get used to is how the French use their fork and knife. Americans often cut a piece of food and then put down the knife and switch our fork to our dominant hand.

The French do things differently, keeping their fork in their left hand and their knife in their right hand for the entire time they’re eating (note that this could be reversed for left-handed people).

Additionally, the fork is held in a way we’d consider upside-down, with the curved part facing up. And the knife is never held in a clenched fist; both utensils are gently gripped with neatly extended fingers at all times.

This may seem complicated and clumsy, but it actually looks quite elegant and gets really easy with practice. In fact, after years of living in France, eating this way has become my natural go-to.

In addition to the photo at the beginning of this section, you can see an example of how the French hold their fork and knife in this very helpful short video, which includes a clever way to teach finger placement for each utensil.

You can also watch this video, where an etiquette expert explains the differences between the American and French/European way of using a fork and knife. One thing to note, though: this expert suggests piling things onto your fork in the European method, but the French tend to do this in a discreet way, allowing for small bites.

It’s considered good manners to eat with your napkin on your lap in many places, but the French take this more seriously than most. Barring an extremely informal situation, like a bite to eat in a fast food restaurant, French people will almost always keep their napkins on their laps at lunch and dinner, even during informal family meals.

The only times your napkin will be on the table are when you are not: at the beginning of the meal, when place settings are awaiting diners and at the end, when you place your napkin beside your plate to show you’ve finished or that you’ve excused yourself momentarily. Otherwise, keep your napkin out of view as much as possible.

Salad is often served with long leaves of lettuce in France, but you must never, never cut it! Of all the French table manner faux pas I inevitably made when I first came to France, this was probably the most egregious. I was told by one French person that this is because it’s almost seen as an insult to the person who served the salad, as if they didn’t realize that someone couldn’t handle the size of the lettuce leaves, I suppose.

The correct way to handle big lettuce leaves in France is to use your knife (which of course is in your other hand continuously as you eat your salad) to help fold the lettuce leaf onto your fork.  Use the tines of the fork to hold the folds in place.

This will take some practice – trust me. And the result isn’t always very neat. But it is possible.

The French never eat quickly. Even when my French husband is running late for work, he never just crams a breakfast cookie between his teeth and rushes out the door; he calmly finishes his coffee and biscuits and then hustles. The French believe that food is to be savored and enjoyed, which is one of the reasons drinking coffee on the go isn’t really done here.

If you’re a naturally fast eater, this can sometimes be problematic, but rest assured, while you might get a few glances if you finish well before everyone at dinner, no one will feel angry or insulted. Still, if you can take the time to make yourself slow down, keeping pace with the other diners at the table, you might find that you really do get to savor and enjoy your meal more.

6. Use fork, knife, and menu placement to communicate with waitstaff

Although it’s not required, it’s generally known among the French that in a restaurant, you can use your menu and silverware to silently and thus politely communicate with your server. (As opposed to the completely rude stereotype of snapping your fingers and calling them over by yelling “Garçon!” Never do this.)

The three most common “codes” you can use in a French restaurant are:

In addition to the photo at the start of this section, you can see examples of these fork and knife placements at the one-minute mark of this video. Although the general rule of the fork and knife placed together at the end of the meal is for them to be at the three o’clock position on the plate, as you can see from these two examples, this might vary a little.

Additionally, the triangle that shows you’re not finished yet is a bit sloppy in our example photo, but such is life.

Another thing to note, if you decide to research French table manners farther, is that there are many drawings and diagrams online that show what your cutlery can communicate to servers or hosts. But most of these configurations are not widely used, and some, like placing your fork and knife in a plus-sign arrangement at the end of a course, may look like you’re being childish to the uninitiated.

So, as a general rule, it’s probably best to stick with using only the two cutlery signals I’ve mentioned, unless you see people around you using other ones.

It’s also important to note that these menu and cutlery codes aren’t absolutely necessary to have a successful meal in most French restaurants. Your server will usually come by at least once or twice to see if you need anything or if you’ve finished. And if they don’t, you can politely catch their eye by lifting a hand and gently waving it, or as they pass, saying (not shouting) “Pardon”.

Where can I learn more about French table manners?

It’s easy to learn more about French table manners. An online search of the term should bring you lots of resources. You can also do searches in French for things like “règles de table” or “règles de savoir-vivre.”

If you’re invited to an incredibly important, formal French meal, I would also advise watching videos about French dining etiquette. These often involve obscure rules that may be helpful. And if you’re worried that you’ll be at a loss, at least be familiar with these rules and then just watch what everyone else at the table is doing and follow suit.

An important thing to keep in mind about French dining etiquette

Whenever you learn about another country or culture’s customs, it’s important to remember that there are probably some exceptions. This is certainly the case for French table manners.

Many of the ones you’ll see discussed online aren’t always followed by everyone in France.  And while some French table manners are common in lots of cultures (don’t talk with your mouth full, don’t put your elbows on the table…), others that I’ve seen on many lists aren’t necessarily practiced at every French table.

For instance, many sources on French table manners will say you’re supposed to keep your hands on the table throughout the meal. They’ll also usually include rules about men serving women. These rules may be practiced in extremely formal dining situations, but of all the meals I’ve eaten with French people of various ages, backgrounds, and social classes, I’ve never particularly noticed them being enforced or followed.

From what I’ve experienced, serving goes in logical order (pass a plate to or fill the glass of the person next to you) and I don’t recall anyone particularly noticing my hands or taking pains to keep theirs constantly on the table, either.

With that in mind, it’s good to be aware of many of these table manners, but not necessarily expect them to be followed. When in doubt,  watch what people around you are doing. And if you can’t manage to do some of these things – for instance, holding a knife and fork the French way – as long as you eat neatly and politely, you should be forgiven, since you’re a foreigner.

What do you think of these French table manners? Are any of them similar to etiquette rules in your own country or culture?

39 thoughts on “6 French table manners that might surprise you”