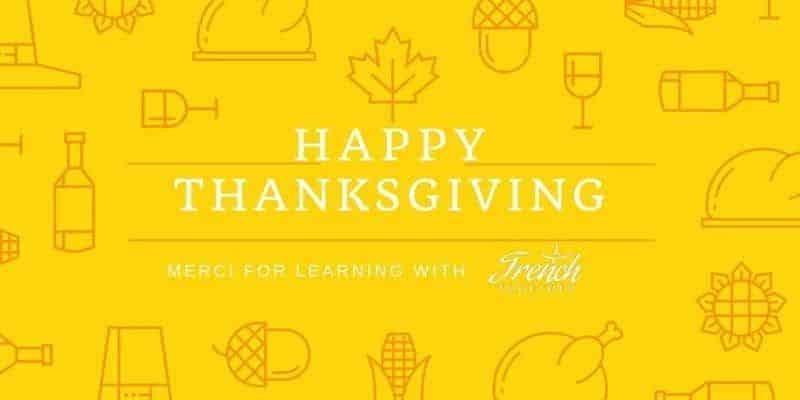 In fact, the only thing most French people know about Thanksgiving is that it’s a day where Americans eat turkeys.

This may sound surprising, but it’s actually logical if you consider the history of Thanksgiving.

Table of Contents
How to say “happy Thanksgiving” in French!
How come the French don’t celebrate Thanksgiving?
What about Black Friday?
Have you ever celebrated Thanksgiving in France?

How to say “happy Thanksgiving” in French!

Thanksgiving isn’t celebrated in France but to say “happy Thanksgiving” in French, you can say Joyeux Thanksgiving or Joyeuse Action de grâce in Canadian French.

After their arrival in America, settlers quickly faced a problem, their food supplies were getting smaller and smaller.

So they decided to start growing plants.

When the first harvest came in 1621, they decided to celebrate.

Considering the origin of Thanksgiving, its absence in France makes complete sense.

That’s also why there is no special way to say thanksgiving in French. We use the English word.

If you live in France and would like to celebrate Thanksgiving, I wish you good luck.

Not only are you not going to get a day-off, you will also have a hard time finding all the food you need for a proper Thanksgiving.

Your best bet is to find a group of other Americans or to go to one of these American stores in Paris.

What about Black Friday?

Black Friday doesn’t exist in France, because it’s not part of French culture. But even if it was, it would be much more regulated than it is in the US or in Canada. French shops have to follow a strict schedule for sales and can’t randomly decide to do sales.

My first encounter with black Friday was when I once saw people fighting over a discounted bag on TV, and that’s most likely what most French people have in mind when they hear “Black Friday”.

Have you ever celebrated Thanksgiving in France?

Celebrating Thanksgiving in France can be a real challenge. Have you ever tried to do it? Would you miss Thanksgiving if you couldn’t celebrate it?

14 thoughts on “How to say “happy Thanksgiving” in French?”