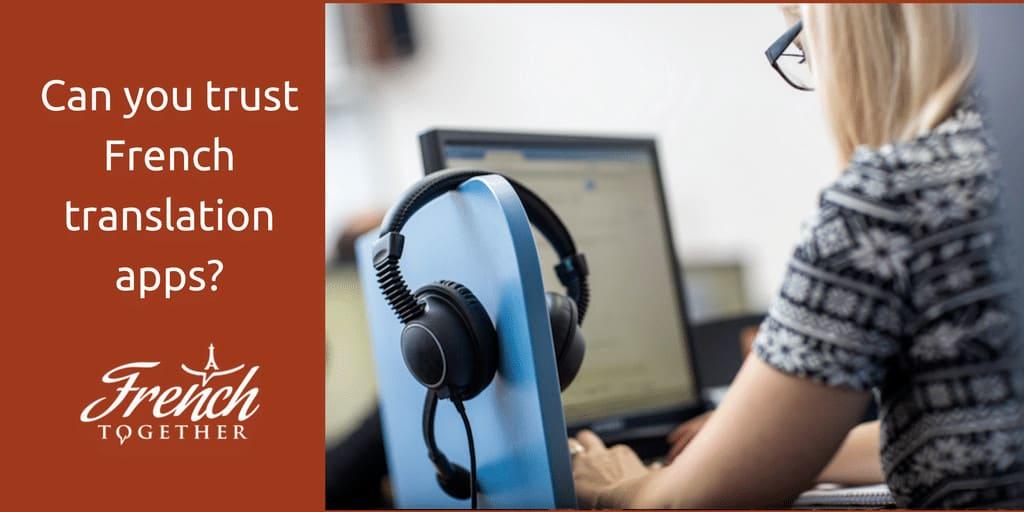 French translators are practical. They help you quickly understand what you read and communicate more easily.

Can you trust their translations, though?

That’s what I wanted to find out, so I decided to ask the most popular free online translation apps to translate a simple dialogue from English, into French.

Which free online translation apps did I test?

For this experiment, I chose four of the most popular free online translation apps:

Around in some form since 1998, Reverso is one of the most popular free online translation apps. In addition to translations, the site also features other language resources.

Launched in 2006, this is probably the most famous translation app out there. Google Translate’s results can be perfectly correct, but no machine translator is perfect, and the app has also become famous for its errors.

Microsoft’s answer to Google Translate, this app is similar to its rival in terms of quality of results.

Released in 2017, DeepL is the newest translation app on our list, and it’s already making waves. It’s supposed to be vastly superior to stars like Google Translate.

How well do popular apps translate a simple dialogue?

I chose a dialogue from the French Together course because it  contains lots of everyday vocabulary, the kind of vocabulary a French learner going to France would need.

The question I wanted answered was: if you were in a French restaurant and needed a quick translation, would these translation apps help you or embarrass you?

Here is the dialogue:

Hello Madame, do you have any vegetarian dishes?
Of course. We have fish.
I don’t eat fish.
We also have chicken.
Erm, I don’t eat chicken either.

Now let’s see how the most popular French translation apps translated it.

When I copy/pasted the dialogue into Reverso, here’s the translation I got:

On a aussi du poulet.

Reverso a very good job. The app has improved since I first reviewed it in an earlier version of this article a few years ago.

Although not an exact copy of the original, this dialogue is perfectly correct, although it left out the “Euh”.

That may not matter if you just need to understand the idea behind a text or are focusing on the grammatical parts of a sentence. But if this were a dialogue in a work of fiction, or a transcript, that “Euh” might have been a way to get a little insight into the speaker.

This is a perfect example of how machine translation often lacks a human touch.

On the other hand, one good point for Reverso is that it also offers an interesting service called Reverso Context.

Instead of automatic translations, Reverso Context offers you a selection of translations from the web. You can then see the source of the translation and decide whether the source is trustworthy enough.

That’s a good translation. Even the filler word is included.

In addition to its ability to translate, Google Translate offers a text-to-speech service you can use to hear everything pronounced.

I was less impressed by this text-to-speech functionality.

The robotic voice pronounced most of the text correctly but sounded far from natural, with a stiff voice and strange overlaps in sounds.

Here’s the translation I got from Bing Microsoft Translator:

Bien sûr. On a du poisson.

There are three notable issues with this otherwise pretty good translation.

The first is a small one in this particular context – the omission of the filler word Euh. As I explained in the section on Reverso, this isn’t extremely important in most cases, but if the dialogue is a work of fiction where the filler word might give insight into a character or situation, it could be problematic.

A bigger issue is using the more informal on to say “we” in one of the sentences of the dialogue.

This isn’t a problem in everyday life (and I would even encourage you to use on to sound less formal) but could be problematic if you need to speak French in a more formal setting.

This video from Oh La La, I Speak French perfectly explains the difference between the two pronouns.

Here’s the result I got from the newest app on our list, DeepL Translator:

I am really impressed with DeepL. Despite being new and not as well-known, its result is close to my original translation, with only the same two slight variations that all of the other apps made: Est-ce que replaced by Avez-vous and de poulet instead of en.

Everything is grammatically correct, and even the filler word was included. which is a nice touch.

Like Reverso, DeepL also offers a way to check how words and phrases are used in other online sources (via Linguee, which you can access by clicking  a tab at the top of the screen).

This feature isn’t perfect -for instance, a compound word or typical phrase like bien sûr can’t be looked up in its entirety but rather word by word. Still, it could be helpful if you want to check a translation or word choice.

All of the apps I tried generated perfectly acceptable, nearly perfect translations of my sample dialogue. There were no major errors or anything that could lead to a misunderstanding.

Both Google Translate and DeepL Translator did the best job, by including subtle touches like a filler word, as well as avoiding borderline mistakes like using two different pronouns for “we”.

Should you use translation tools?

After seeing that all of these apps did a good, or even great, job at translating our sample dialogue, you may be tempted to use them to translate from French into English or English into French all the time. But that would be a mistake.

French translation apps have gotten a lot better lately and offer a simple way to quickly understand the general meaning of a text, but expecting more from these apps is dangerous for several reasons.

The fact that the translation apps I reviewed did a good job translating the sample dialogue doesn’t mean they never make mistakes.

For instance, Google Translate’s embarrassing mistakes regularly go viral.  Relying too much on these tools will hurt you because you run the risk of learning from their frequent grammar mistakes.

That’s why it’s essential to learn French with a trusted course and avoid material created by machines, not to mention non-native speakers.

The last point may be controversial. After all, there are lots of passionate French learners who create and share awesome content in French.

The problem is that French material created by non-native speakers frequently contains tiny mistakes, and these mistakes add up.

Whether it’s a machine translator or a non-native French content creator, if you mostly learn from sources with mistakes, you’ll make mistakes, too, because you’ll assume that what you’re learning is correct.

#2 Translation mistakes can be embarrassing

Machine translation works with algorithms, which means that as time goes on, they should get better. But you don’t know if the AI has had the time and experience to correctly translate a word or phrase.

Not too long ago, when I wrote an earlier version of this article, I input the sentence “I try to avoid foods with preservatives” into Google Translate.

Here’s what I got as a result : J’essaie d’éviter les aliments avec des préservatifs

Yup. Google Translate translated the sentence as “I try to avoid foods with condoms”.

A few other translation apps did the same.

That’s definitely not something you would want to say in a restaurant!

Fortunately, none of the translation apps on our list make that mistake now; they’ve had time to learn from algorithms and other improvements. But who knows where the next awkward translation mistake is lurking?

The French language is much more formal than the English language and this makes it hard for translation apps to know how to translate.

Take the case of tu vs. vous. They both mean “you”. The only difference is that one is informal while the other is formal.

But French translation apps don’t know whether you are supposed to speak formally or informally, so you may end up sounding rude if you rely on their translation.

If you decide to use French translation apps despite this risk, make sure to check whether the translation you got uses tu or vous; it’s a good indicator of the degree of formality you’ll find in the rest of your text – although even that isn’t certain (take, for example, the use of on and nous in Bing Microsoft Translator’s version of our sample dialogue).

What to use instead of French translators?

For all the reasons above, I recommend you only use translation apps to translate French into English, or as a way to quickly understand the meaning of a sentence.  And not an important sentence that you must understand at all costs.

If you constantly rely on translation apps, you may end up learning incorrect French and making embarrassing mistakes.

So what do you do if you need a correct English-to-French translation?

If you really want to translate from English into French, the best you can do is ask someone to do it for you.

If you don’t have a French friend or family member (or they’re busy), there are two subreddits that are particularly helpful for that. R/translator is all about translation requests while r/frenchhelp is dedicated to helping you with the French language in general.

How about you – what do you use to translate French?