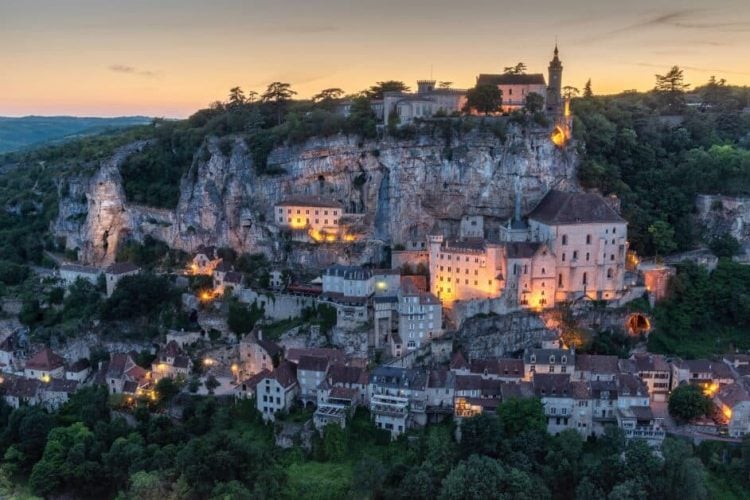 If you’re planning a trip to France or just dreaming of one for now, you may be hoping to visit a French village.

The French village holds an iconic place in how many of us picture France, and I’m happy to say that this image is more or less a reality. There are lots of charming villages throughout France.

But the question is, which one(s) to visit?

If you’re looking for some inspiration, here are five French villages we particularly like!

Here, in no particular order, are five French villages we love.

Located in the Dordogne region, Collange-la-Rouge’s red sandstone architecture is so striking that it became a part of its name! Full of medieval and Renaissance-era houses, churches, religious buildings, and hôtels particuliers (manors), it’s a consistent presence on lists of the most beautiful villages in France, and is listed as a historical monument.

But not only is Collanges-la-Rouge beautiful; in my personal experience, the people there are very kind, as well, making a trip to this village a beautiful experience both for its architecture and for the moments of human connection you might have while you’re there.

Ranked among Les Plus Beaux Villages de France, an official list of France’s most beautiful villages, Brouage may not be exactly what you’re thinking of when you picture a French village — and that’s part of its charm.

Enclosed within the walls of a 17th century fort designed by the famous architect Vauban, this village in the Charente-Maritime region features charming cobblestone streets, quaint shops, and remnants of centuries past, including a centuries-old glacière  (small building for storing ice underground, in the days before electric refrigeration).

Brouage used to be located on the Atlantic coast, but as the centuries passed, the coastline receded. Now, you can climb the village’s ramparts and look out onto marshland. It’s a reminder of how much things can change…and yet, the centuries-old graffiti you’ll find carved into its walls is a reminder that human nature stays fundamentally the same.

If you’re visiting Paris, you might think a quick trip to a beautiful French village is off the cards. But there are some stunning villages in the Île de France region (the region around Paris). One of the loveliest is Moret-sur-Loing.

Located on the Loing River, in the forest of Fontainebleau, the village’s history dates back to Gallo-Roman times. Today, you can see medieval architecture there, as well as more recent, equally charming buildings from subsequent centuries.

Moret-sur-Loing has a relaxing, calm air, lending itself to pleasant strolls. It’s also home to le Musée du Sucre d’Orge (Sugar Candy Museum), which is housed in an appropriately charming cottage on the river.

When describing most French villages, words like “charming”or “beautiful” come to mind. With Rocamadour, it’s more like “breathtaking”.

Built onto and around a stone cliff, this village, located in the Lot department, towers skyward. It’s particularly fitting, since Rocamadour has long been a pilgrimage site. Home to the Black Madonna, a statue dating to the 12th century that has been tied to miracles,  Rocamadour invites its visitors to climb its steep streets, which are sometimes staircases instead of flat pavement.

If you’re not into relics and old buildings, Rocamadour is still a stunning sight, and you might be happy to know that it borders both a bird sanctuary and…a monkey park, La Fôret des Singes, where you can hang out with hundreds of free-roaming Barbary macaques.

French and German charm unite in this lovely village in the Alsace region, close to the German border. With its colorful, distinctive architecture featuring exposed wooden beams, Eguisheim stands out, so much so that it’s not only on the Plus Beaux Villages de France list; it was also voted the French’s favorite village in 2013.

Eguisheim is an excellent destination for anyone, and if you love wine, the visit might be even more worth your while. The vineyards that surround the village are known for the excellent wine they produce. In fact, Eguisheim is located on Alsace’s Wine Route. Other things to observe here are storks, beloved in Alsatian culture – there’s a stork nature park just outside the village center.

Where can I find more French villages to visit?

You can also visit the official site of Les Plus Beaux Villages de France to be sure you’ll find a village that’s notably stunning.

That said, if you rent a car while in France, you’re likely to come upon a charming village or two just by driving around. This doesn’t have to be in an especially rural area; for instance, many of the villages on this list are just a few kilometers away from big towns and cities.

Is it easy to get to French villages?

French villages are probably best visited by driving. But if you don’t drive or won’t have a car when you’re in France, don’t give up hope.

Many villages are close to train stations in nearby cities and towns. From there, you may be able to find a bus or shuttle that will take you to the village your heart is longing to see.

If there’s no public transportation, you’ll likely also be able to take a taxi. You’ll probably find a taxi near the train station, but you can also do an online search for “taxi” and the name of the village or the town you’re arriving in, to reserve in advance. Often, the driver will agree to pick you up when you’ve finished exploring.

Whether you’re a trip planner or an armchair traveler, hopefully this list of French villages worth visiting has given you some ideas for your next trip to France, imaginary or otherwise!

Do you have a favorite French village? Feel free to share it in the comments!