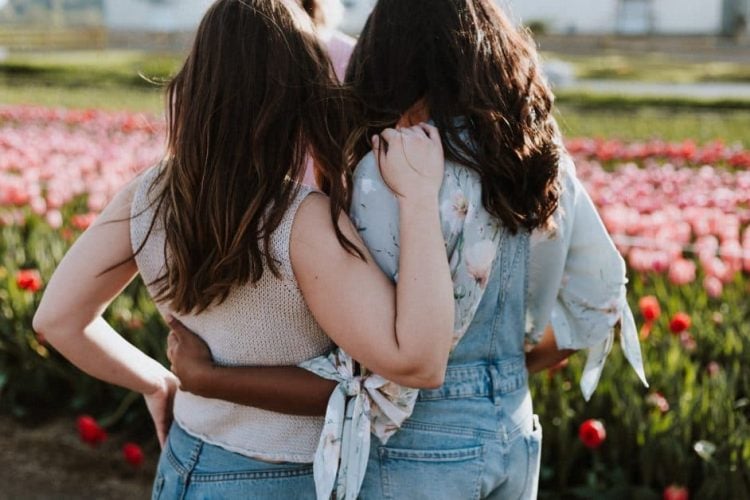 Ami (or its feminine form, amie) is the most common way to say “friend” in French. But there are several other options.

As you learn French, may make some friends along the way, and you might want to know what to call them!

Let’s look at some common ways to say “friend” (and, sometimes, more than “friend”) in French!

9 ways to say “friend” in French

Here are the most common ways to say “friend” in French that you’ll come across. As you’ll see, many of these can also sometimes mean “boyfriend/girlfriend” or “lover,” too.  Luckily, there are usually ways to tell what’s being implied.

The standard “friend” (and sometimes “boyfriend/girlfriend” or “lover”) – ami/amie

Ami(e) is the most basic, common word for “friend” in French.

This word has to agree with the person or people it’s referring to, so you’ll see it either as:

It can be used in formal or informal situations, so it’s the perfect go-to word for “friend” in French.

….But ami/amie can also refer to a boyfriend/girlfriend or lover.

To tell which one a person means, as a general rule:

So for instance, Elle est partie en voyage avec un ami (She went on a trip with a friend) would mean that these two are just friends; Elle habite avec un ami (She lives with a (guy) friend) means she’s living with a male friend, not a boyfriend.

These are general rules, and there are exceptions.

For instance, sometimes you can just use a possessive pronoun with ami(e) and have it mean, well, “friend”. For example, Tu es mon ami (You’re my friend) or J’ai vu ton ami Christophe au supermarché l’autre jour. (I saw your friend Christophe at the supermarket the other day.)  Often, it just comes down to context.

Sometimes, certain common phrases with ami use a possessive pronoun but are known to only refer to friendship. One of the most common of these is mon cher ami (my dear friend).

Fortunately, knowing which one is being implied is usually pretty easy to suss out by context. For instance, Elle est parti en voyage avec son ami could mean she’s gone on a trip with her boyfriend, but it’s a bit ambiguous. But if you say Elle habite avec son ami, it would be understood that she lives with her boyfriend.

Note that because most of France is still influenced by traditional, hetero-normative culture, if someone says something like Elle habite chez son amie, not everyone would necessarily understand that the women are a couple. But as French society evolves, it’s increasingly likely that it would be understood, especially by younger generations.

Il habite avec son amie. (He lives with his girlfriend.)

Marie est une amie à moi. (Marie is a friend of mine.)

Another way ami(e) can be used to mean “romantic interest” that’s far less ambiguous is the phrase petit(e) ami(e), which means “boyfriend” or “girlfriend”.

You may be wondering why, then, French people don’t just use this all the time when it comes to talking about a romantic partner. The answer is that petit ami/petite amie is used with the connotation that a relationship is recent or maybe that you’re not expecting it will last a long time.

For instance, a parent might use this term for the person their high school-age kid is dating. Or maybe some adult friends have just met another friend’s new boyfriend or girlfriend.

After a while, as the relationship gets more serious, words like ami(e), copain/copine, or compagnon/compagne are used.

In a way, it makes sense; there’s nothing petit(e) about the role a long-term partner plays in your life – or at least, there shouldn’t be!

Elle a une nouvelle petite amie. (She has a new girlfriend.)

The other common “friend” or sometimes “boyfriend” or “girlfriend” – copain/copine

Copain or copine is another fairly common way to say “friend” in French. It’s slightly less formal than ami(e), but not by much.

Like ami(e), it has to agree with the person it’s referring to:

Another way copain/copine is similar to ami(e) is that it could refer to either a platonic friend or a boyfriend or girlfriend (although not necessarily a lover).

As with ami(e),  if you’re lucky, you may also get the benefit of hearing or seeing  un or une before the word. In that case, the person is talking about just a friend. But, as with ami(e), if copain/copine is used with a possessive pronoun, it usually (but not always!) means “boyfriend/girlfriend”.

And as with ami(e), context is the best way to know whether or not this word means just a friend or a romantic partner.

Elle habite avec son copain. (She lives with her boyfriend.)

In most cases, pote is masculine. But as with “pal” in English, it doesn’t necessarily denote a particular gender; it’s just much more commonly associated with males.

However, in more contemporary French, pote can also be used to refer to a female friend and is preceded by a feminine modifier.

On a passé hier soir entre potes. (We spent last night our pals.)

Poteau is a diminutive of pote – a rough equivalent of “pal”, “bud”, or “mate”. It’s an informal, slang way to refer to a friend.

Unlike pote, this word is exclusively used with male modifiers, and it usually refers to male friends only. That said, language constantly evolves, so maybe this will also eventually be used with female friends and modifiers. For now, though, use it only with male friends – and in very informal situations.

Ce mec est ton poteau ? (Is this guy your friend?)

The “bro” – frère or frérot

In French, frère usually means “brother” and frérot is a familiar, informal way to say “little brother”. But just as “brother” in Anglophone slang can refer to a close male friend, the same goes for these two words. Frère and frérot are rough equivalents of “bro” or “bruv”.

These words are mostly used by people from the banlieue (French equivalent of inner cities) and in street culture, rather than by frat boys and the like. A wealthy Caucasian French person using frère or frérot this way would come off as a bit false or trying to be cool.

That said, in extreme or poetic situations when someone wants to express a feeling of deep solidarity with another person, frère, or, less commonly, sœur (sister) between women, could be used, just like in English.

But in general, unless you’re young and hip and talking to someone else who is young and hip, it’s probably best not to call anyone frère or frérot in French.

Short for camarade de classe, the word camarade is often used to refer to a friend from school or a classmate. This word can be masculine or feminine.

Voici Sarah, c’est une camarade de classe. (This is Sarah, she’s a friend from school/classmate of mine.)

Note that camarade is also the equivalent of “comrade” for French Communists.

As a noun, intime means “a close friend”. It’s slightly formal and a bit less common than most of the other words on our list.

It may surprise you to know that although the word is related to intimacy, this type of friend is exclusively platonic. It’s an intimacy of the soul.

You may also come across this word’s longer version, ami intime/amie intime.

How do you say “best friend” in French?

The most common way to say “best friend” in French is:

meilleur ami for a male friend or meilleure amie for a female friend – literally best (meilleur(e)) and friend (ami(e)).

But as you can probably guess after reading this list, there are a few other ways to say “best friend” in French, too.

The most common of these include:

Are there other ways to say “friend” in French?

Our list features the most common ways to say “friend” in French. But there are other terms, from old-fashioned ones, to regional ones, to up-and-coming slang ones this middle-aged author might not even be aware of!

You can also do an online search for “comment dire ami en ___” followed by a specific Francophone country or region.

You might find some interesting synonyms for ami on this list. Of course, make sure to check a word’s definition and try to see it used in context before you use it.

Pay attention as you read, watch, and listen to things in French – you may discover different ways to talk about friends.

And if you’re looking for ways to talk about different kinds of friends, or words about friendship in French, the WordReference entry for ami is a great place to start!

I hope you found this article helpful. Here’s what I think is the perfect quote to finish it with, courtesy of Voltaire: Toutes les grandeurs du monde ne valent pas un bon ami. (A good friend is worth more than all of the titles and riches in the world.)