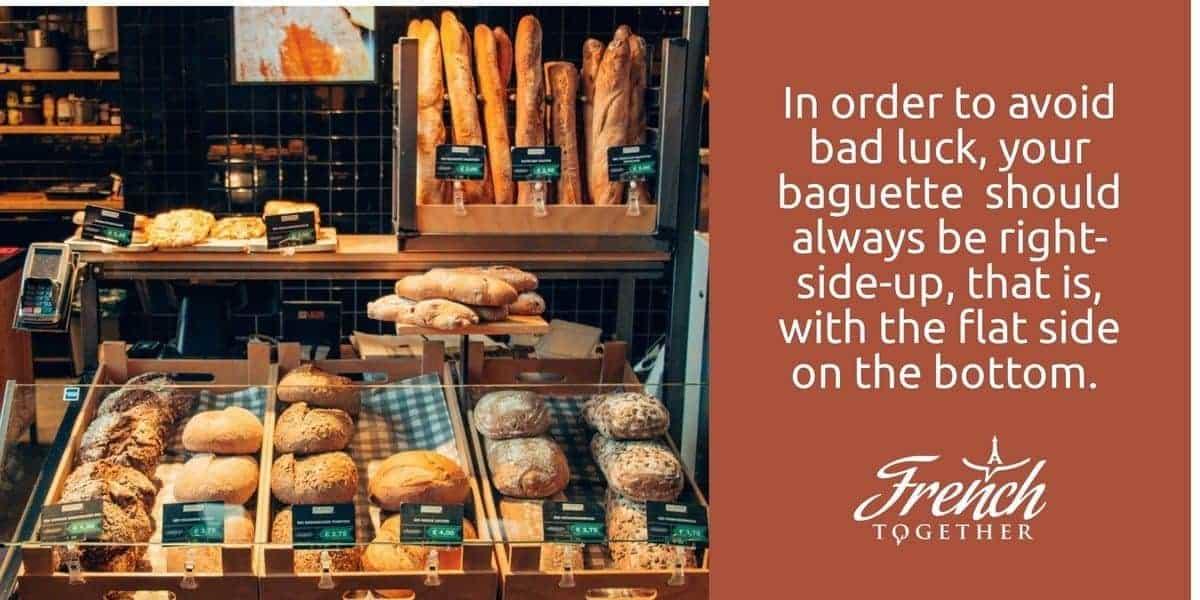 As a whole, the French aren’t the most superstitious of people. Whenever I warn my son not to open an umbrella in the house, or sprinkle some salt over my shoulder, my French husband rolls his eyes and blames it on my Italian origins. Nevertheless, luck –good and bad – is very much a part of French thought.

Let’s check out how to say “good luck” in French, and look at French superstitions a bit while we’re at it. If we’re lucky, when you finish reading, you’ll have a few helpful phrases in your vocabulary arsenal, and maybe some insight into things like bread positioning and dog poop (really).

Type “good luck” into any translating software, and you’ll get bonne chance as a result. It’s the go-to way to wish someone luck, and can be used with anyone, in any situation that seems appropriate.

Interestingly, if you think about it, bonne chance is one of those somewhat rare occasions where a phrase translates exactly into English. Bonne, of course, means “good”, and chance is luck; you’ll often hear someone say something like, J’ai de la chance. (I’m lucky./Lucky me.) or Ils ont de la chance ! (They’re lucky!/Lucky them!), and so on.

If you want to add what you’re wishing the person luck on, things get a bit more complicated.

Do a quick search of bonne chance and you’ll probably find it paired with either pour or avec. But if you want to know why, or which preposition to use, an online search (or even one in my trusty, heavy, unabridged print dictionary) won’t give you an easy answer. So, if you’re wondering if you use bonne chance pour or bonne chance avec, luckily, I can help.

Wishing someone luck in French

Wishing someone luck in French is similar to how it’s done in English: souhaiter bonne chance à quelqu’un.

As in English, this expression is a bit formal, so if you’re in an informal situation, simply saying “Bonne chance” would probably be a better choice.

Beyond bonne chance: Other ways to say “Good luck” in French

If you’re all bonne chance’d out, it’s your lucky day (jour de chance) — there are several other ways to wish someone luck in French:

Used with a subjunctive verb, que often introduces a hypothetical, and in this case wished-for, situation.  It’s the equivalent of “May the…”.

A good example is the iconic phrase, “May the Force be with you” – that’s Que la Force soit avec toi in French. Or, you could wish someone something like, Que ton voyage se passe bien. (May your trip go well.).

As in English, this way of wishing someone well tends to be a bit formal and/or dramatic, so use it judiciously or risk being laughed at or perceived as insincere.

If you’ve ever received a French holiday card or text message, you’ve probably seen this phrase. Although it’s typical for end-of-year festivities, and is sometimes translated as “Season’s greetings,” it more accurately means “Best wishes.”

A variant you can use that feels slightly more personal and less cliché is Tous mes meilleurs voeux (All the best).

As in many other languages, if you want to wish someone luck, you could bypass the typical phrases altogether and just express what you want for the person. There are a lot of interesting and often eloquent ways to do this in French. You can find a few that are sure to suit you by doing an internet search for “Façons de dire bonne chance”.

Getting dramatic: How to say “Break a leg” in French

If you know any actors or theater fans, you probably know that it’s considered bad luck to say “Good luck” to someone before a performance. In English, the solution is to tell them instead to break a leg. In French, the idea is the same, but the phrase is much shorter and dirtier – in every sense of the word.

The equivalent of “break a leg” in French is merde. That’s right, the French word for “shit.” But it’s not just a silly or vulgar way to avoid talking about good luck – there’s actually something behind it.

As this delightfully-illustrated article explains, it’s generally accepted that the origin of saying Merde instead of Bonne chance before a performance comes from the 19th century, when people would go to the theater in their carriages. If a performance was particularly popular, there would be carriages lining the sidewalk in front of the theater and theatergoers wouldn’t be able to avoid stepping in the droppings from other carriages’ horses, then stepping inside the theater itself.

This would be a horrendous disaster for a germaphobe like myself, not to mention whoever had to clean the floor, but it also meant the play was a hit!

Who can say if that’s really the reason French actors opted for Merde?  But I hope it is. What a cool little picture of a bygone time in what seemed simply like a bad word (albeit a French favorite)!

How to wish someone bonne chance in a tough situation

The French are often known for their precision, and this applies to wishing people luck. One of my favorite French expressions, Bon courage (literally “good courage”), is used to wish someone luck in hard times or with something that will inevitably be difficult.

To me, the best way to translate this expression would be “Hang in there,” although Bon courage is a bit more formal.

For example, if I give a homeless person some change, I also want to give them some encouragement. Bonne chance seems a bit light when you think about all that they may have to overcome to get to a better place. Bon courage, on the other hand, shows that I wish them well and that I acknowledge the hardships they’re experiencing and probably will experience if they try to change their life.

You can also use bon courage for less serious contexts. For example, if a friend is going to have a math test tomorrow and, like me, she’s terrible at math, I would tell her “Bon courage.”

Some French beliefs about luck are common throughout the Western world. For example, a four-leaf clover is considered a lucky object (un porte-bonheur or un grigri), as is an upside-down horseshoe hung over your door.

As in many other cultures, in France, you cross your fingers (croiser les doigts) when you hope something goes well. A French friend might tell you, Je croise les doigts pour toi (I’m keeping my fingers crossed for you.).  You also knock on or touch wood (toucher du bois) when you mention that something’s going well, to call on good spirits to keep it that way.

As far as bad luck goes, a broken mirror is an unlucky object (un porte-malheur).

Black cats are also considered unlucky, even though most French people don’t take this particularly seriously — I know several who have black cats of their own, including my husband, who grew up with black cats and who adopted our current amazing black cat just before I met him (which clearly shows black cats must be lucky, right?).

Still, black cats are iconic harbingers of bad luck in the French imagination, whether they cross your path, or for some people, you simply spot one unexpectedly. That said, it’s interesting to note that black cats are also a positive part of the Parisian imagination, thanks to artists in the mid- to late 19th century (many of whom frequented the Chat Noir cabaret near Montmartre). If you’re a fellow black cat fan, check out some of Steinlein’s amazing paintings and sketches, which often feature black cats, without any connotation of bad luck.

Friday the 13th is considered an unlucky day in France, just like in many other parts of the Western World, although, as I’ve said before, the French aren’t extremely superstitious in general, so the day doesn’t carry as much importance as it does in some other cultures.

This is another interesting contradiction, since some writers and historians believe that Friday the 13th became an unlucky day because of the French!  On Friday, October 13th, 1307, King Phillippe IV had a number of Knights Templar burned at the stake, allegedly for certain crimes and blasphemies but more likely because he owed the order money. It’s said that their leader, Jacques de Molay, cursed the king and his descendants, as well as the Pope and anyone else involved in his death. The curse does seem to have been effective – or was it all just a big coincidence?

And then there are some superstitions that are very particularly French. These three are probably the best-known:

The uniform for French ordinary seamen includes a white beret topped with a red pompom. I’m not sure why touching one is supposed to bring good luck, but I’m pretty sure that if you tried to do this without asking the sailor, the result probably wouldn’t seem lucky at all.

I rarely hear French people talk about superstitions, except for this one, which even normally skeptical individuals often feel obligated to follow. Your baguette (or any loaf of bread) should always be right-side-up, that is, with the flat side on the bottom. The reason for this is supposedly because in the Middle Ages, executioners could have free bread, and the baker would leave an executioner’s loaf upside-down on the counter so that he would know it was his to take. Essentially, an upside-down baguette means death!

Many years ago, I was walking to work when I suddenly felt an unpleasant squish under one of my shoes. Like many people in Paris every day, I had stepped into a big pile of dog poop.

Although there are fines for not picking up after your dog, most people in Paris (and possibly the rest of France, though I’ve never seen sidewalks as dirty as they are here) ignore the rule. As I stared down in disgust and frustration, a lady passing by flatly remarked, “Ça vous portera chance” (“That will bring you luck”).

I thought she was being sarcastic, and it actually made me laugh a little. I collected myself, resignedly got some tissues and hand sanitizer from my purse, and went to work.

It turns out, though, that the woman wasn’t particularly witty. In what is perhaps a way to make the best of a, well, crappy situation, the French have a superstition: stepping in dog poop is lucky. Well, it’s lucky if your stepped into it with your left foot, anyway.

This is my favorite French superstition because, like saying Merde before a performance, it gives such a vivid picture of life in France. And it turns out that we’re still stepping in animal droppings, despite so many changes over the past few centuries.

Even so, I feel lucky to live here. If you dream of living in or visiting France one day, je te souhaite bonne chance.