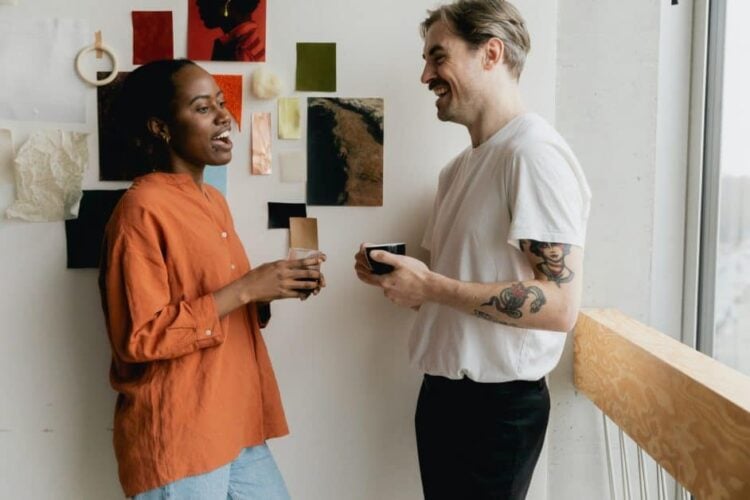 There’s no specific way to say “Good morning” in French – at least not in French spoken in France.

This may seem especially surprising since the French are extremely polite and have a number of different ways of saying “Hello” and ways of saying “Goodbye” for particular situations and times of day.

It’s not that the French don’t greet each other in the morning; they just use greetings you know already, as well as some other phrases.

So if you want to start your day by greeting your favorite French person the proper way, don’t despair!

Let’s look at nine ways to say “Good morning” in French, including one exception to that whole “no way to say ‘Good morning’ thing”.

If you break it down, Bonjour, the French go-to greeting, means “good” (bon) and “day” (jour). That’s why it works perfectly for “Good morning”. When you think about it, it’s maybe even better than “Good morning”, since you’re wishing someone an entire good day.

Bonjour first thing in the morning might seem weirdly formal to you at first. I know that was the case for me. But I can tell you firsthand that it’s what French people really do say to each other. For instance, when we’re not just nodding to each other in a tired fog, my husband will greet me with Bonjour.

So this is the best French “Good morning” for formal or informal occasions.

If you want a less formal “Good morning”, Salut , which usually means “Hi” in French, is the way to go.

You could say it’s the rough equivalent of “ ‘morning”. With this in mind, I would only use this with friends and other people I’m close to. Otherwise, sticking to Bonjour is probably the better idea.

You may come upon a scene in a French TV show, movie, or book, where one person greets another the morning after they’ve had a particularly romance-filled night, by saying Salut toi. This roughly translates to “Hey, you.”

Depending on how it’s said, this phrase can run the gamut of registers, from a gruff greeting that still expresses some sort of fondness, to flirty and cute, to downright sexy. But as with anything that could be flirty or sexy, it could come off silly, so try to “read the room”. It might help to watch and read things in French to notice when and how it’s used and said.

And anyway, you’re certainly not required to say this – it’s just a good idea to at least recognize it, since you’re likely to come across it at some point.

Note that in general, Salut toi can also be a pickup line, sort of like “Hey there,” or “Well, hello there!” or even “Hey, baby.”

On a totally different level, Salut toi  is sometimes used to address little children (and sometimes pets), sort of like saying, “Good morning, you,” or “Hello there, you.”

As for using it for a pickup line, be aware that this will probably come off as disrespectful to most people, and if that doesn’t deter you, since 2018, under French law, you could be fined for street harassment. So, save Salut toi for someone you know.

I often hear Tu as bien dormi ? (or, if a group is being addressed or it’s in a formal setting like a hotel, Vous avez bien dormi ?) as a morning greeting in France.

This phrase, which means “Did you sleep well?”,  can be used among family members or friends. It can be also be asked by a host to their guests.

The kindness of the comment is a nice way to start the day, both for the listener, and for the person being asked!

Note that this greeting is usually used at the place where you slept or maybe just after leaving it. So it’s not a good one to say, for instance, if you have a morning meeting with a friend or coworker.

The “Have a good morning”: Bonne journée

What if you don’t want to say “Good morning” as a greeting, so much as wish someone a good morning?

There is a phrase for that: Bonne journée.

Like Bonjour, Bonne journée covers the whole day. But maybe you could think of that as being generous?

Bonne matinée  is far less common than Bonne journée. So if in doubt, the latter is the way to go.

In French spoken in mainland France, there is no exact translation or specific greeting for “Good morning”, although we’ve just seen several ways to express the general idea.

But for French speakers in Canada, it’s become increasingly common to say Bon matin, a phrase whose existence is largely inspired by English.

Voilà, the exact translation of “Good morning” in French that you might have been looking for!

That said, based on my research, this is a relatively new phenomenon and may not be appreciated or understood by every French-speaking Canadian.

In fact, according to this funny and fascinating video by L’insolente linguiste, who is québécoise, the phrase is condemned by the OQLF (Office québécois de la langue française), an organization that regulates the French spoken in Quebec (the equivalent to France’s Académie Française). Still, as with other words that are disapproved of by these organizations, people still use them in everyday life.

Additionally, from what I understand, Bon matin is only used in Quebec, so not in all Francophone communities in Canada.

And Bon matin is not used in France AT ALL, so it’s not even worth giving it a shot here.

If you’re Canadian or live in a part of Francophone Canada, I’d love to hear in the comments if you or people you know use or don’t use Bon matin, how you feel about the phrase – anything you’d like to share is welcome!

Other common ways to say good morning in French

There are a lot of other ways to say good morning in French, including:

Do the French say “Good morning” to each other?

Even though French people don’t have a specific phrase for “Good morning”, it’s certainly normal to greet family, friends, roommates, coworkers, etc. in the morning. They just usually say Bonjour.

Of course, when it comes to the people you live with, if you’re not a “morning person”, you may not say much of anything. But in general, remember that the French do tend to be polite and greet each other, so even a friendly nod or trying to grumble out one of the ways to say “good morning” in French is a good idea!