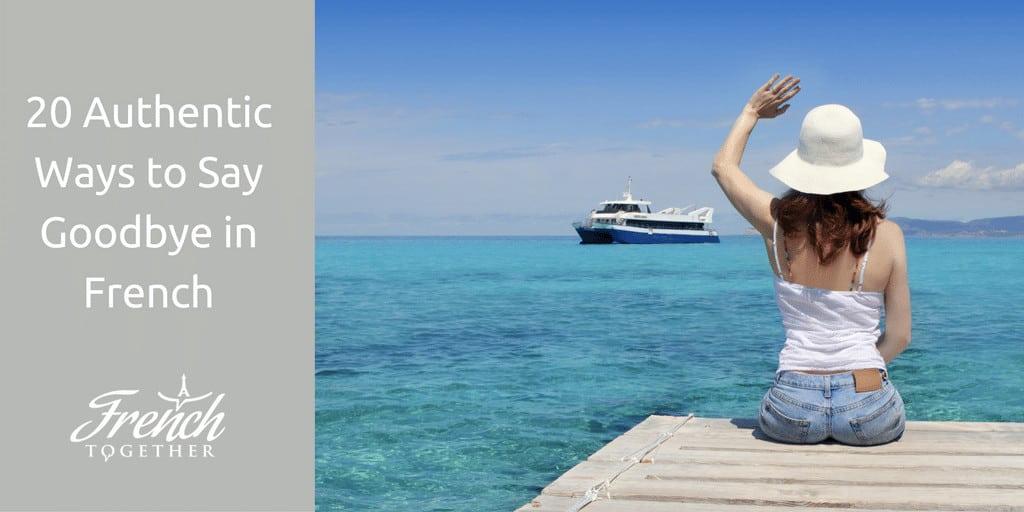 You just ate in a lovely restaurant in the centre of Bordeaux. You paid, left a tip for the friendly waiter and are about to leave.

And you wonder…Should you say Au revoir? Or is it Salut? You want to sound friendly, but not too informal.

Oh and you’d love to communicate your desire to come back to try that fondant au chocolat the couple sitting at the next table is eating.

If only you knew more ways to say goodbye in French!

Au revoir is the most common way to say “Goodbye” in French. You can use with anyone in any situation without being rude — but it can come across as overly formal in some situations.

If you listen carefully, you’ll notice that most people pronounce it “anrvoir” instead of “au revoir”.

That’s because the French tend to drop letters and delete words when they speak, something I explain in detail in this article.

That said, if you’re a beginner, I recommend you start by learning the correct pronunciation and to wait to reach a conversational level before you learn the shortened version.

Otherwise, your Au revoir is unlikely to be understood.

Au revoir is great but it sounds way too formal as a “goodbye” to friends, family members and people you know well.

That’s where Salut comes in. You may know it as the French equivalent of “Hi” but did you know you can also use it to say “Bye”?

The only difference with the English “Bye” is that French is a more formal language in general, so you’ll rarely hear someone like a shopkeeper say it to a customer, for instance. In professional or formal situations, stick with Au revoir.

If you know you’re going to see someone again soon (or hope you will), you can use À bientôt.

Often written A bientôt, since capital letters don’t have to include accents, this expression is neutral veering to informal, and extremely common in contemporary French.

It literally means “See you well early”. Cleaning that up, we get “See you soon.”

If you want to say “See you” and then when, in French, the easiest way is to use À and the day/time. This phrase can be used in most formal or informal situations.

Here are some very common examples:

You can also use À with notions of time. For example:

If you spend time in France around the end of the year, you’re likely to hear the cheesy “À l’année prochaine !” joke (See you next year!).

While À is extremely versatile, note that it can’t be used with an exact date (le 15 mars, le 3 mai, etc.).

I told you that the French love to shorten everything. Can you guess what’s supposed to come after à plus ?

Yup, you guessed right. It’s the short version of à plus tard.

This is an informal “goodbye” you’ll hear a lot in France. You can use it with your friends.

You can also write it “à +” when you’re texting or writing on the internet.

Instead of using the À plus a day or time formula that we’ve just looked at, you could use the phrase On se voit….

Literally translating to “We see each other” and meaning “We’ll be seeing each other”/We’re due to see each other”, it’s followed by a time/notion of time/or an exact date (and time).

On se voit demain. (We’ll be seeing each other tomorrow/We have an appointment scheduled tomorrow.)

On se voit la semaine prochaine. (We’ll be seeing each other next week/We have an appointment scheduled next week.)

This goodbye formula is maybe slightly more formal than À plus a day or time, but generally both are okay to use in professional, formal, or informal situations.

The big difference is that you can’t use À with a precise date- in that case, you’d have to use On se voit , as in the first example in this section.

This Italian word is commonly used in French as an equivalent of Salut. You can use it with friends.

But while ciao means both “hi” and “bye” in Italian, it’s only used to say “bye” in French.

Note that you might hear some friends jokingly, flippantly, or quickly end a phone call by doubling this word: Ciao ciao.

Adieu means “Farewell”. You use it when you know you will never see the person again.

You could use it ironically with a friend who made a mistake and is now going to meet his boss to apologize for example.

Or you could use it when breaking up with someone you sincerely hope you’ll never see again.

Ravi d’avoir fait votre connaissance is the “goodbye” to use if you enjoyed spending time with someone you’ve just met and who you are seeing in a formal or professional context.

It literally means “It was a pleasure to have made your acquaintance”.

Keep in mind that the adjective ravi (delighted) will take an “e” if the speaker is female. Or it could take an “s” or an “es” if someone is speaking for a group.

You can use the slightly more casual Ravi d’avoir fait ta connaissance if you’re talking to someone younger or someone you’re now on a “tu” basis with. But keep in mind that it’s slightly formal, so only use it if it doesn’t seem like the person you’re talking to would think it sounded stuffy.

Bonne continuation – All the best

Bonne continuation is a tricky French goodbye because it doesn’t have any direct English equivalent.

It translates roughly as “Enjoy the rest of what you’re doing”. You use it in formal situations to say “All the best” or “Good luck in the future”.

Bonne chance is French for “Good luck”. Depending on the context, it can also be a way to end a conversation, in lieu of a more concrete farewell.

You can use Bonne chance to wish someone good luck in both formal and informal situations.

Bon courage – Hang in there

Bon courage also means “Good luck” in a way, but it implies that the result depends more on the person’s actions and abilities than on luck. In that sense, it’s probably best translated as “Hang in there.”

You use it when someone is about to face difficulties or do something that’s generally considered complicated.

Just like English, lots of ways to say goodbye in French start with “good”. You can use them in both formal and informal situations.

Here are some of the most common examples of this type of “goodbye”:

As you can see from these examples, the adjective bon changes to agree with the word it modifies. Luckily, you’ll use, see, and hear these expressions so often that you’ll quickly get used to them.

Life is too short to stick to a single “goodbye” in French, so the next time you speak French, pick one from this list and use it!

You’ll be surprised by the difference the right “goodbye” can make.

6 thoughts on “25 common ways to say “Goodbye” in French”