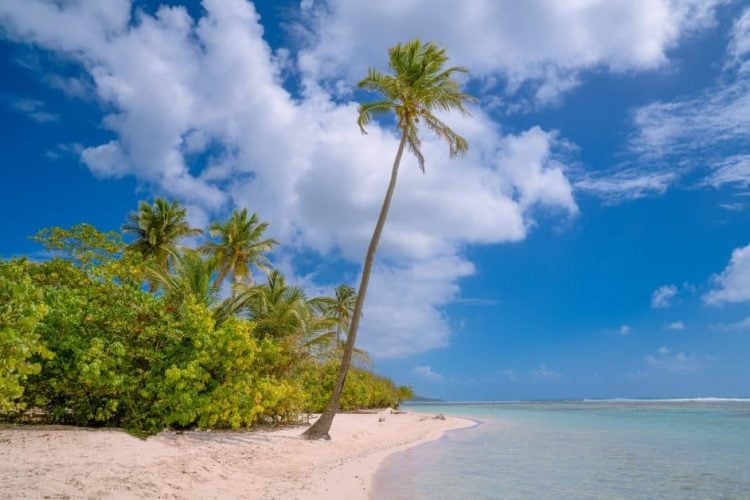 When learning and teaching the French language and culture, we tend to focus on mainland France. But of course, that’s not where all Francophones live or come from. And it’s not even, officially, the entirety of the country of France.

Let’s take a look at another part of France and Francophone culture: Guadeloupe.

Guadeloupe is located in the Caribbean Sea.

An archipelago made up of about twelve islands, it’s north of the island of Dominica and south of Montserrat. Fellow French overseas department Martinique is located nearby as well, south of Dominica.

When looked at on a map or from the air, Basse-Terre and Grande-Terre, two of Guadeloupe’s islands that are situated very close to one another, look like a butterfly, which is why you may hear them referred to as “the Butterfly Island”.

Is Guadeloupe a part of France?

Although Guadeloupe is separated by mainland France by the Atlantic Ocean, it’s still considered a part of France – an overseas department and region of France, to be precise.

This means that Guadeloupe follows the same laws as mainland France, has local government representatives with seats in the Sénat and Assemblée Nationale, the same national institutions (education, police, etc.), and people born there are French citizens.

French overseas departments, regions, and territories are often collectively referred to in the French media as les DOM-TOM. This is a French acronym that stands for les Départements d’outre-mer, Territoires d’outre-mer. Here’s a full list of les DOM-TOM.

What is the currency in Guadeloupe?

As part of the European Union, Guadeloupe’s currency is the euro.

What is the population of Guadeloupe?

According to the most recent data available, Guadeloupe has a population of 400,020 people.

What language do people speak in Guadeloupe?

As part of France, the official language of Guadeloupe is French.

Guadeloupean Creole is also a commonly spoken language. This language developed as a way for people from the different cultures that lived in or settled Guadeloupe to communicate together. It’s based in French, influenced by English, Dutch, Portuguese, and various Amerindian languages.

Today, 99% of Guadeloupe’s inhabitants speak French, and a majority of them speak Creole as well.

Speaking of which, this webpage includes a list of common phrases in Guadeloupean Creole.

Like any region of France, Guadeloupe has its own local accent and special words and phrases. Still, because they’re fairly similar to non-natives, the accent of people from Guadeloupe is often grouped with the accent of fellow DOM-TOM Martinique and called un accent antillais (an Antilles accent).

You can hear a Guadeloupean accent in this video interview with a gardener from Guadeloupe .

Her accent isn’t as bombastic and punctuated as you’ll often hear, since the Antillais accent is often exaggerated in French comedies, hip hop, and YouTube videos.

As you may be able to hear, as a general rule, in an Antillais accent, the consonants tend to be more rounded and the cadence is influenced by African languages.

Like many accents in French (whether from the mainland or otherwise), the accent antillais has stereotypes associated with it. The most common is that people from the Antilles are “on island time” and lazy. Obviously, stereotypes are just that – stereotypes. It’s best to get to know a culture firsthand and go beyond them. I’ll suggest some ways to do that a little further on in this article.

What is the capital of Guadeloupe?

The capital of Guadeloupe is Basse-Terre.

Here are some major dates and events in Guadeloupe’s history:

ca. 3000 BC – First known date of Guadeloupe being inhabited. Eventually, the Arawak people would settle the archipelago.

ca. 1400 AD: The Kalina-Carib peoples are now the major group populating the area

November 1493 AD: Christopher Columbus lands on Guadeloupe and dubs it Santa María de Guadalupe, in honor of Our Lady of Guadalupe.

1635 – Guadeloupe is claimed by two Frenchmen, representatives of the trading company la Compagnie des îles d’Amérique. This is considered the official date of Guadeloupe’s colonisation.

During the centuries that followed, slavery would be implemented by the French government, in order to find enough labor to work the sugar plantations and at harvesting other crops. There would be a number of slave rebellions during this time, as well, but unfortunately none would have long-term success.

1664 – Guadeloupe is officially declared a property of the King of France.

1759-1763 – The British briefly take control of Guadeloupe, before the French regain it under the 1763 Treaty of Paris.

1794 – As part of the new, post-Revolutionary French government’s policies, slavery is abolished in Guadeloupe.

1808-1814 – The British take over some of Guadeloupe’s islands, and under a treaty, Guadeloupe becomes a property of the Swedish in 1813. But the French regain power in 1814.

1848 – Slavery is finally abolished in all French colonies and overseas territories, including Guadeloupe.

1850’s – Indentured servants from India are brought to Guadeloupe for labor. They will become a significant cultural influence.

1946 – Guadeloupe gets a new legal status: from a French colony, it becomes an overseas department of France.

1960’s to today – Although Guadeloupe generally has a friendly relationship with mainland France, many groups exist that want Guadeloupe to be an independent country.

Today, Guadeloupe is known as a tourism destination, especially for mainland French people who seek out warmth in the cold winter. In addition to its beaches, Guadeloupe boasts nature preserves full of lush vegetation, as well as an active volcano, La Soufrière. Guadeloupe is also famous for its sea life, including the beautiful underwater landscapes at the protected Cousteau Reserve, which welcomes divers.

Sadly, despite its beautiful natural features, Guadeloupe’s environment has been damaged by pesticides and other chemicals that were used in farming decades ago. But efforts have been made to improve the health of the land and water.

On a happier note, the culture of Guadeloupe is rich and full of warmth. Guadeloupe’s culture is known for its numerous great writers (including poet Saint-John Perse, winner of the 1960 Nobel Prize in Literature ), its diverse music, including zouk, compas, traditional Guadeloupean, and classical, and its Carnival, which takes place in February of every year.

An interesting and unique part of Guadeloupean culture is the traditional headscarves (coiffes) you might see many women wearing. The way each one is knotted carries a meaning. For instance, a scarf with four points sticking up means “There’s room in my heart for the person who wants it.” This Facebook page shows some of the most typical coiffes of Guadeloupe, as well as their meanings.

How can I learn more about Guadeloupe?

You can learn more about Guadeloupe by doing online research. Reading Guadeloupe’s Wikipedia page or information on Wikitravel are good places to start for a general overview.

Of course, one of the best ways to get to know any place is through its art and literature. Many famous and respected writers hail from Guadeloupe.  Guadeloupe also has a rich music scene, with many styles.

I hope you’ve enjoyed our journey beyond mainland France to discover Guadeloupe. Have you ever been there in real life? Feel free to share your thoughts and experiences in the comments!

3 thoughts on “Guadeloupe: The beautiful island where France meets the Caribbean”