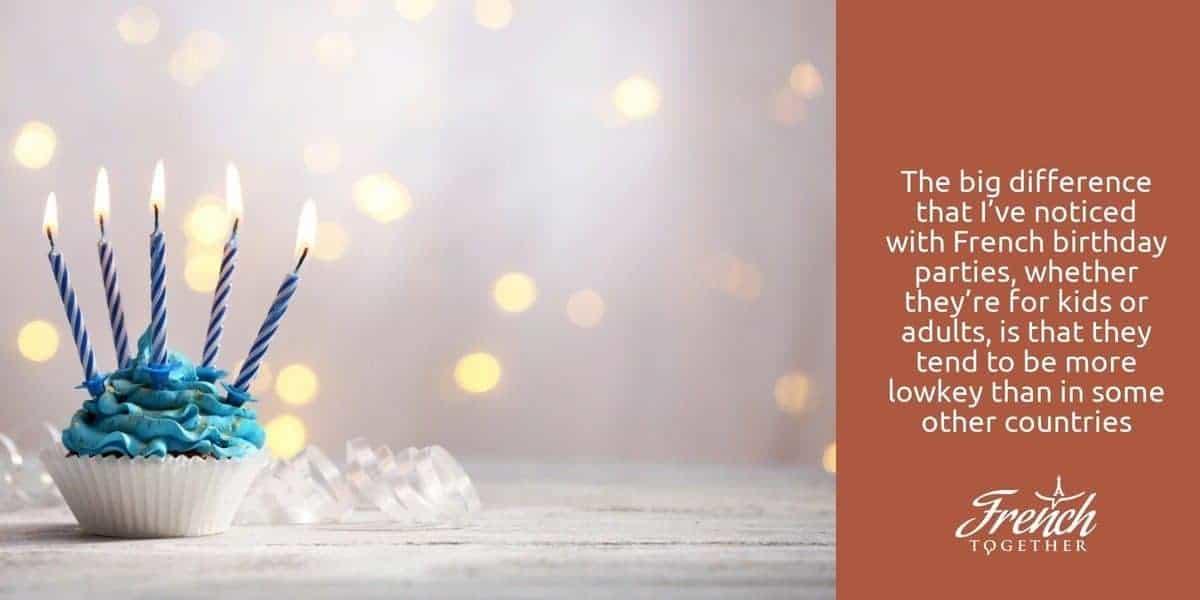 There are some cultural details we take for granted. If you’ve ever celebrated classmates’ birthdays in your French class, or seen a French movie or TV show where there was a birthday (un anniversaire), you might think you’ve got French birthday traditions down pat.

Then there may come a day when you’re invited to a French person’s birthday, or even that you’re the one planning it. This may be when you realize that there are some details about celebrating birthdays in France that may surprise you.

Table of Contents
Joyeux anniversaire
Bon anniversaire
The Canadian happy birthday
Other ways to say “Happy Birthday” in French
Happy belated birthday in French
How do the French celebrate birthdays?

Joyeux anniversaire is the most common birthday greeting in French.

It can be confusing for us anglophones, of course, because the word anniversaire makes us think of a wedding anniversary (anniversaire de mariage in French).

When it comes to anniversaire as a birthday, simply think of it as the anniversary of the day you were born.

Some people prefer this less common alternative. There is no particular reason; Bon anniversaire isn’t more or less formal than Joyeux anniversaire, for example. I think it’s just a personal vocabulary choice. That said, if you’re looking for a French birthday card or decorations, you may have to look a little harder to find this phrase.

Joyeux anniversaire or bon anniversaire are the standard ways to wish someone happy birthday in French. But if you’re studying Canadian French (Quebecois) or just want to extend birthday wishes to a French-Canadian friend, you would say Bonne fête– literally, “Good party/celebration”.

That seems pretty straightforward, but if you’re also communicating with French speakers from other places, be careful: Bonne fête has a completely different meaning in other parts of the francophone world.

If you say “Bonne fête” to a French speaker who isn’t from Canada, they’ll think you’re referring to their saint’s day. Also known as a “name day” in English, this is the feast day of the saint whose name they share. For example, if you have a friend named Julien, his saint’s day is August 2.

As you might imagine, these days aren’t arbitrary – they come from a calendar that was devised by the Catholic church and has been used for centuries (with a few new saints added and more modern names included over time).

Some families, especially practicing Catholics, will celebrate someone’s name day like a mini birthday, with a cake, for example, although not a big party or presents. Other people will simply say Bonne fête! to the person whose name day it is. And of course, France is no longer run by the Church, and is a secular, multicultural society, so many people don’t celebrate their saint’s day at all.

Still, lots of completely secular promotional or even official calendars do include the saint’s name for each day, and many non-religious television stations and newspapers will mention the name of the day’s saint.

You can click here to see a very typical (like, so typical that I more or less have the same one taped to my refrigerator here in Paris) mini calendar that has saints’ names alongside completely non-religious things like school vacation periods.

Other ways to say “Happy Birthday” in French

If you want to pull out all the stops and say more than a simple phrase, an internet search like “façons originales de dire ‘joyeux anniversaire’” is a good idea. Lots of sites will give you some eloquent phrases or quotations to use.

It’s kind of reassuring that the French have a few ways to say “Happy belated birthday” – it shows that this kind of thing happens in other cultures, too, even if it’s not ideal. We’re all human.

The simplest way to wish someone a happy belated birthday in French is Joyeux anniversaire, avec un peu de retard (literally, “Happy Birthday, with a bit of lateness”).

You’ll also sometimes hear or read Bon anniversaire tardif,  but this is not as common and doesn’t seem to have a pleasant ring to it for French-speakers.

How do the French celebrate birthdays?

Now that we’ve learned what to say for a French person’s birthday, how do you celebrate it? Here are some specific details that may make French birthday celebrations different from ones in your native culture:

What you sing at French birthdays

A typical French birthday celebration is like most birthday celebrations in the Western world: There’s cake and often presents (especially if the person celebrating their birthday is a child). The birthday boy or girl blows out candles (bougies) after the guests sing the French version of Happy Birthday to You (or, in Canada, a very pretty song sung to the tune of the Quebecois national anthem, which is linked to in this very informative article).

Interestingly, in the French version of Happy Birthday to You, sometimes the person’s name isn’t sung. I’m not sure that there’s a particular reason for this; I’ve heard it at family gatherings as well as larger parties where you might think that maybe not everyone knows the birthday person’s name, so it doesn’t seem to be tied to that.

There is another version of Happy Birthday to You in French with different lyrics, but while it’s the most common one you’ll find on YouTube, I’ve personally never heard it sung at any of the many French birthday parties I’ve been to over the years.

The big difference that I’ve noticed with French birthday parties, whether they’re for kids or adults, is that they tend to be more lowkey than in some other countries, very much including my native country, the US. This is especially true when it comes to the cake.

The French don’t use icing or make elaborate birthday cakes. Many French people consider icing to be écoeurant (disgusting) and prefer a subtler taste and look for their birthday pastries. It’s very common to have a simple, homemade cake with no icing and minimal (if any) decorations at a birthday party, especially if it’s for kids. A grown-up’s party would usually feature a freshly baked cake bought from a good local boulangerie. Often, there will be a fruit tart instead.

If you like cake, the good news is, these options are still delicious – just different than what you might be expecting if colorful cakes with icing and designs are the norm in your culture.

If the party is for a kid, I often get in touch with the parents to ask what they might want. Some parents seem a bit embarrassed by this and will only give you vague answers, but others will at least tell you what the kid is interested in. You’re generally not expected to buy anything very expensive or elaborate. For example, at a recent birthday party my son was invited to, we bought the guest of honor, a fan of Star Wars, a lightsaber toy.

For adults, you can obviously choose something based on what the person likes, but if you don’t know them well, some kind of quality food or drink offering (most typically a bottle of wine or a box of high-end chocolates) is always appreciated. If you come from another culture, you could offer them a quality product from yours, if you think they’d appreciate that. But wine, chocolates, or flowers are excellent go-to’s.

Gift cards don’t seem to be as popular in France as they are in some other cultures. I think this is due to the French finding it rude to talk about or bring up money (although money is the common, traditional gift at French weddings).

In France, theme parties or parties hosted at special venues don’t seem very popular. Instead, most of the birthday parties I’ve been to have been held at people’s homes or (for kids’ birthdays) at local parks.

Fancy decorations or and getting dressed up also aren’t the norm, whether for adults or children.

In France, birthday cards tend to be sent by mail from people who aren’t present at the party, rather than given with gifts.

For adult birthdays, it’s common to toast with champagne, although this definitely depends on the context – a twentysomething celebrating with friends might opt for something harder, for example.

Of course, all of this depends on the person, their family/friends, social class, tastes, and so on. But as a general rule, it’s what you can expect if you’re invited to a French birthday party.

If you’re from a culture where that’s not the case, you might worry that this will feel a bit lackluster, especially if you’re planning a party for a French loved one. Over time, though, I’ve come to really appreciate simple French birthdays in their own right. There’s a sincerity and a less artificial feel to them.

In a way, birthday parties are a moment where even the most sophisticated French people show a down-to-earth side. It’s a way to get back to what a birthday is really about: celebrating someone’s presence in the world.