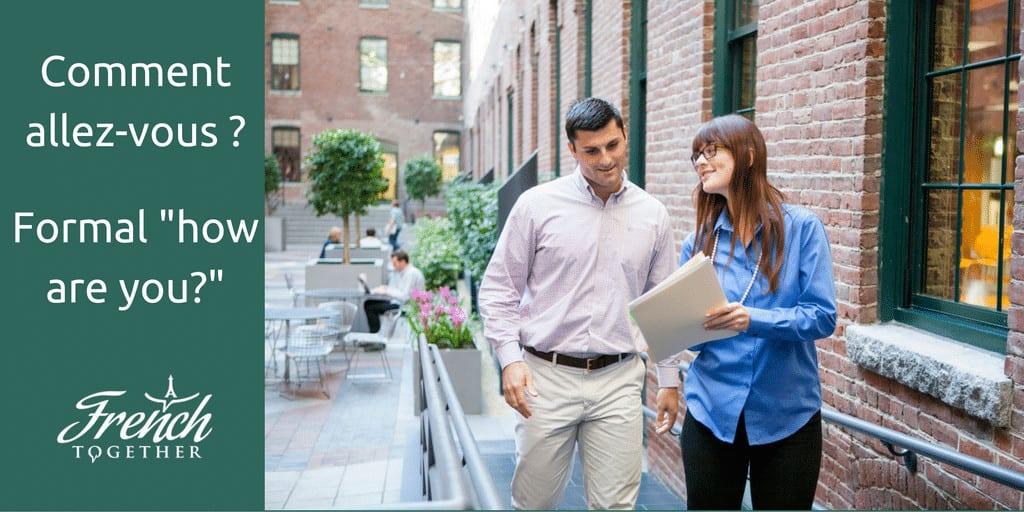 You walk to your friend, ask him “comment allez-vous ?” (how are you) and expect a passionate answer about what’s he’s been up to lately.

Instead, your friend simply answers “good, and you?”.

What did you do wrong?

In fact, the only mistake you made was to use the wrong “how are you”.

In French, there are at least 16 ways to say “how are you”. Use the right “how are you” and French people will open up to you and gladly tell you about their day, thoughts and feelings. Use the wrong form and they’ll tell you “bien merci” while you’re left wondering what to say next.

Discover 16 ways to say how are you in French and other useful greetings!

“Comment allez-vous “ is the most common “how are you”. You can safely use it with anyone in any situation.

I say safely, because you won’t offend anyone by using it. However, it’s not the best “how are you” to use in informal situations.

It litterally means “how go you”. In French, we don’t use the verb “to be” in “how are you” and alwayse use “to go” instead.

That’s similar to the way “how is it going” is constructed except that “comment allez-vous” is way more formal.

“Comment vas-tu” is the “informal” version of “comment allez-vous” as indicated by the use of “tu”, the informal French “you”.

However, it also uses the inversion way of asking questions which is considered formal.

The end result is a “how are you” stuck between formal and informal French.

I personally never use it, because I prefer “comment allez-vous” in formal situations and “ça va ?” in informal situations, and feel that “comment vas-tu” doesn’t belong anywhere and ends up being either too informal or too formal.

However, some people like to use it when they write to people they know well, but still want to sound serious. “Comment vas-tu” would fit nicely in a romantic letter for example.

“Comment ça va” literally means “how is it going” or “how it goes”. You will frequently see it misspelled as como se va on the internet but this is incorrect and the only correct spelling is comment ça va.

You can use it with friends, family members and people you know well. Basically, with anyone you’re on a “tu” basis with.

Ça va: The short “how are you”

French people love deleting words and letters when they speak.

You just need to know that “ça va” is often considered less serious than “comment ça va” and other French “how are you” starting with “comment”, so people are less likely to give you a deep answer.

In fact, the most common answer to “ça va ?” is…”ça va” (literally: it goes), meaning everything is going well.

“ça va” is similar to the English “how are you” greeting. You use it more to say “hello” than ask a person how she is doing.

You can also start with “ça va” as a greeting and later ask “comment tu vas ?” to indicate that you now expect a more detailed answer. This is common if you meet someone in a public space or in a group and want to wait to be in a more intimate setting to talk.

If you like to be positive, you can also say “ça va bien ?” (is it going well?), but again, don’t expect a deep answer.

Sa va: The French slang “how are you”

“Sa va” is the slang “how are you”. It’s used the same way as “ça va ?” and the only difference is that it’s written wrong since “sa” normally means “her” and has nothing to do with “ça” (even though both are pronounce the same way).

Using it doesn’t make much sense since it’s not even shorter than “ça va”, so I recommend you not to use it at all unless you want to annoy your French teacher.

It’s important to know it exists though, because lots of young French people use it on Facebook.

The most typical answer is “sa va”.

“Comment vous sentez-vous” literally means “how do you feel?”.

You use it when you know someone was sick or had a problem and want to know if they’re now doing better.

A possible answer would be “ça va mieux” (I’m feeling better) or “pas terrible” (not great).

The concerned “how are you”

You can use  “comment tu te sens”  to ask a friend who was feeling sick or maybe a little depressed if he’s now feeling better.

This is simply the informal version of “comment vous sentez-vous ?”.

Like all other French “how are you” starting with “comment”, it usually requires a deep answer and not a simple “ça va”.

The casual “how are you”

“Quoi de neuf” is the French “what’s up” and literally means “what’s new?”.

You can use it with friends you haven’t talked to in a while or with anyone you’re on a “tu” basis with.

When you ask “quoi de neuf”, expect a detailed answer of what the person has been up to lately.

Quoi de beau: The positive “how are you”

“Quoi de beau” literally means “what’s beautiful?”. It’s a positve and casual way of asking how a person is doing.

Most people will answer by telling you about the nice things happening in their life, but you may also hear “pas grand chose” (not much) if the person feels that there is nothing nice happening in her life.

The relaxed “how are you”

Literally “it’s rolling”,  “ça roule” is a colloquial way to ask if everything is going smoothly.

You can use the French expression “comme sur des roulettes” (literally: like on wheels) as a positive answer.

Hello how are you?

If you want to say “hello how are you?”, you can simply say Bonjour comment allez-vous ?

Do note that asking how are you after hello is way less common in French than in English so won’t hear this often.

What you will hear a lot more is salut ça va (hi how are you.)

How to answer “how are you?” in French

French people generally expect an answer when they ask “comment allez-vous ?” or “comment tu vas ?”, but the answer doesn’t have to be long.

In fact, it’s common to simply say “ça va” (it’s going well) whether you actually feel good or not.

Like in English, you usually keep more detailed answers for your friends and people you know well.

Here are a few formal answers:

The last three answers sound formal, but you’re actually unlikely to use them in a formal context, because they sound negative and many people consider that your answer to “how are you” should always be positive in a formal context.

And a few informal answers:

After answering “how are you”, it’s polite to ask the person how she is doing.

In this case, you can say:

Have you ever asked “how are you?” in France? How did it go? Share your story in the comment section below!