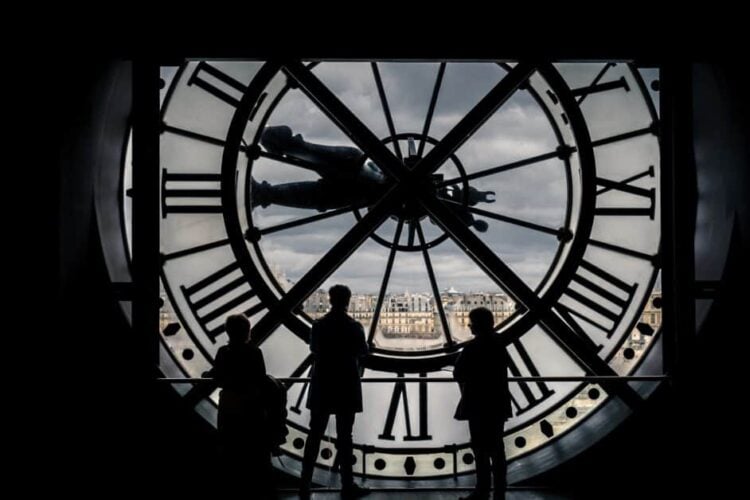 As a teacher, French culture and language writer, and non-native French speaker, “How long does it take to learn French?” is a question I get a lot. Unfortunately, there isn’t a single, concrete answer. That’s because there are a few questions you have to ask yourself first.

Let’s look at five questions that will help determine – or at least estimate – how long it would take you to learn French.

How long does it take to learn French?

According to the Foreign Service Institute (FSI), French is a category 1 language. This means learning French takes 23 – 24 weeks (575 – 600 hours) for most English speakers. This makes French one of the easiest (and fastest) languages to learn.

1. How well do you want to speak French?

Not all of us have the same language learning goals.

Some people want to learn French so that they can travel to a French-speaking country and communicate with locals.  Others need to have a good enough level of French to pass a class. Still others may dream of having deep conversations with Francophones, or of reading novels in French. You may even be someone who’s hoping to pursue a career where a total mastery of French is essential – for instance, translating, interpreting, or teaching.

Each one of these examples will require different amounts of work and time.

2. What is your native language?

Some languages are closer to French than others. Learning French will be easier if your native language shares the same alphabet and many of the same basic grammar rules. For instance, a native Spanish speaker will probably learn French more quickly than a native speaker of Chinese.

That said, don’t let this hold you back, because another thing that can make learning French easier is….

3. How motivated are you?

When I started learning French, I wasn’t the most likely person to do well in my class. Sure, I got good grades, but I had no previous experience with the language, only spoke English, and was slightly hard of hearing, which made learning correct pronunciation harder than it might be for the average person.

But I was motivated! I was fascinated by French culture and history, had a list of books I dreamt of reading in their original French versions, and loved watching French movies. In those early days of the internet, I even hung out in chat rooms where I tried to connect with French speakers.

This meant that I was willing to study, to ask questions, to do extra work, and to keep French in my life on a daily basis through the activities I mentioned in the previous paragraph. And so, I was more often exposed to French, more often thinking and writing in and practicing French than most of my classmates. That, ultimately, is what made me learn French faster than them.

So if you’re worried that you’re at a disadvantage in some way – say you don’t speak a native language that’s similar to French – don’t focus on that; instead, ask yourself how motivated you are.

4. How much time can you spend on French?

This is another important question, and it often ties in to the previous one.

Spending at least 15 minutes a day on a language is a good idea if you want to attain a basic level, say for engaging in simple conversations while traveling.

But the majority of the time, you will need to practice more, especially if you want to master it.

I asked French Together founder Benjamin Houy how long it would take someone to learn French, based on the amount of time they spent studying it per day. According to him, learning French generally takes:

Of course, everyone is different, and as you can see from Benjamin’s answer, other factors, like your native language, can also affect the outcome. But other sources, including the Alliance Française,  seem to generally agree with his estimates.

That said, there are exceptions. You might find that you pick up on things quickly, or maybe your circumstances change and make it easier for you to learn, or more difficult.

The importance of time spent on French may lead you to a related question:

So, if I can’t spend at least 15 minutes a day on French, should I just give up?

The answer to this is a resounding “NO!”

That said, if you can’t spend at least 15 minutes a day on French, I’d encourage you to really examine that.

You may be incredibly busy, with lots of things demanding your time, and when you have free time, you may just need to unwind. But it still seems like it would be possible to spend 15 minutes in an entire day on French, even if it’s spread out – for instance, 5 minutes in the morning and 10 minutes at night, or some variation of this, depending on when you’re free.

Remember that studying French doesn’t necessarily mean sitting down at a desk with a pencil in your hand. You could use an online French learning app or course to do exercises on your phone while you commute, wait on line for something, or even, dare I say it, while you’re on the toilet!

You can memorize important vocabulary by putting up lists in places in your house where you frequently stop and look. For instance, when I do the dishes at night, I’m standing in one place and don’t have many distractions, so I could have a book or list open and glance at it and test myself while I clean up.

15 minutes probably isn’t impossible for the vast majority of people; it’s just how you envision studying and how you use your time.

5. How are you studying French?

Some of us have to study French a certain way. For instance, if you’re taking a French class in a school or university, there’s a curriculum to follow, specific testing methods, and so on. The end result of taking French classes this way may lead to a more in-depth knowledge of the language, but it will probably take you more time than something like an online course.

That said, just because you have to follow the rhythm of the school year doesn’t mean you can’t supplement your studies with outside learning tools and other ways to inject some French into your life.

If you’re not required to take a French class in some scholastic institution, you should take your time to get familiar with what kind of options are out there. What kind of online French course or app would suit you best? You can get familiar with many of them with the tips and reviews in our articles on learning French.

And, as with French classes in school, you can also supplement what you’re learning with additional ways to add French to your everyday life, like watching French movies and French TV series (or, if you prefer,French cartoons), reading French websites, French newspapers, French magazines, and French books, or listening to French music and French podcasts.

Generally speaking, by learning with an online course instead of classes, you’ll probably learn French faster, because the rhythm is faster. But that said, you will still have to practice to strengthen and maintain your language skills.  And that’s where the big reveal comes in:

Once you’ve answered the questions in this article, you’ll probably have a good idea of how long it will take you to learn French. But there’s a catch. Even if you have simple goals, like learning to have easy conversations while traveling, you’ll never really stop learning French.

Like anything in life, you continue to learn a language (including things about your native one) throughout your life. Learning a language isn’t an on/off button type situation: It’s an ongoing process.

You may have realized this if you’ve ever stopped studying French for a while and then decided to pick it up again. It probably didn’t come back to you completely. That’s because languages require constant practice and upkeep.

Luckily, this doesn’t mean boring or grueling work. As I’ve mentioned in previous sections of this article, there are lots of ways to put some French into your life each day. But just make sure you vary it a little.

For instance, if you only watch French TV shows, you aren’t practicing speaking, writing, or reading French. So maybe try to add reading French news articles online, writing a journal in French or finding a French pen pal or community forum, and seeking out a French conversation partner for speaking practice.

You don’t have to engage in each of these activities every day, but try to do them frequently, say at least a few times a week. If you don’t have the time or willpower to do everything, at the very least keep watching and listening to French.

You can use our list of free French resources to find lots of ways to keep practicing French.

It may sound difficult or discouraging, but keeping up with a language isn’t horrible or impossible, I promise – and I say this from experience.

I didn’t get to move to France immediately after I finished my French classes in school. So, to keep up my French, I found a conversation partner, kept spending time in French chat rooms online (yes, I am old!), read French books or magazines that interested me, and watched French movies and videos of all sorts, which I got at my library, but which you can access much more easily today online (YouTube alone has tons of free French shows, documentaries, videos by French vloggers, and more!).

I speak French fluently now, but I still practice French every day. It’s just easier now, since I live in France and the language is all around me and unavoidable. But if I ever move back to the US or to another, non-Francophone country, I’d have to make sure I was getting a little bit of French practice every day.

So, how long does it take to learn French?

With all of this in mind, here’s the shortest possible answer to the question “How long does it take to learn French?”

Depending on your goals, native language, study method and time, and motivation, within 6 months to 3 years you should be able to speak French at a good level. It will take longer if you’re following a secondary school curriculum or want to totally master French for a career in something like interpreting.

But whatever your level and however long it takes you to get there, you’ll never really stop learning French.

So, while you’re on this initial part of your French learning journey, find fun French resources, interests, and hobbies that will help you keep up what you’ve worked so hard to learn.