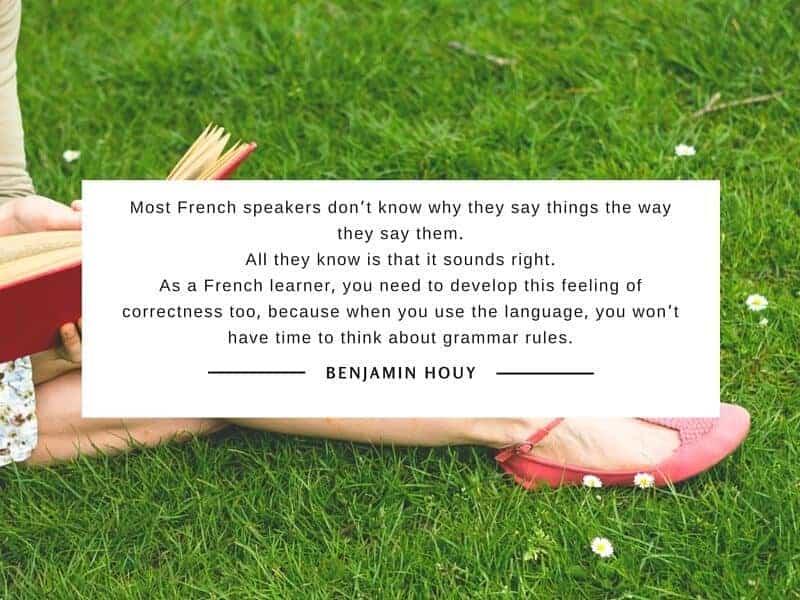 If you studied French at school, your teacher probably asked you to learn the conjugation of the verb “avoir” and “être” by heart at some point.

He told you that’s necessary, because “you can’t master the French language without learning grammar rules”.

Considering that the majority of students who learn languages this way fail, I’d argue that this isn’t only wrong, but also counterproductive.

You do need to know French grammar to become a confident French speaker, but you absolutely don’t need to learn grammar rules.

Here is what you should do instead!

Table of Contents
Why studying grammar is often a waste of time
When should you study grammar rules?
How to learn grammar naturally

Why studying grammar is often a waste of time

So boring that you most likely avoided doing it when your teacher asked you to do it.

If you did study, you did it because you had to and didn’t enjoy it at all.

The result? You quickly forgot everything.

This is a healthy process, we need to forget so we can move on with our life.

But this also means that our brain will often consider that what’s boring is what we should forget.

There are often more exceptions than rules

For any given rule you learn in French, you’ll probably have to learn an impressive number of exceptions.

This means that you’ll not only need to think about the rules when you speak, you’ll also have to wonder if you’re not dealing with an exception.

By the time you’re done thinking, your conversation partner will be sleeping.

I regularly speak with French learners who know grammar rules better than I do.

They proudly tell me that French adjectives have no secrets for them anymore and that they learned how to conjugate the present tense by heart.

And then they make mistakes as soon as they speak.

That’s because knowing the rules doesn’t mean you’ll know how to apply them.

All they know is that it sounds right.

As a French learner, you need to develop this feeling of correctness too, because when you use the language, you won’t have the time of think about rules.

Learning grammar in context is proven to work better

The fifth rule of French Together is to learn grammar in context, and there is a good reason for that: it works better.

The famous linguist Paul pimsleur once made the following experiment:

Certain classes would practice saying pronoun-filled sentences in the language laboratory, without hearing any rules, while other (“ control”) classes would learn them by the usual method— a statement of rules followed by written and oral exercises. Then both groups would take the same test. Paul pimsleur

The outcome was that, when both groups were tested on their ability to say and write French sentences containing pronouns, the students who had spent only sixty minutes practicing in the lab did slightly better than those who had spent more than a week on it in class.Paul pimsleur

When should you study grammar rules?

I spent most of my life hating German grammar. I hated that something as simple as knowing whether a word is feminine or masculine seemed so hard.

Until I discovered that all German nouns ending in “tät” are feminine.

Suddenly, I was able to easily know the gender of most of the nouns I encountered.

Learning that there is a link between the ending of a noun and its gender helped me, because this rule (or rather pattern) is easy to learn and applies to almost any sentence.

But most rules are hard to remember and rarely useful.

That’s why you should focus on learning vocabulary and not make grammar a priority.

That or you could simply learn grammar naturally.

How to learn grammar naturally

If you want to develop the feeling of correctness I mentioned above, you need to do what native speakers did when they learned French: get a ton of exposure to the language.

If you regularly hear and read French you can partly understand, your brain will naturally learn to recognise patterns and you’ll quickly be able to tell whether a sentence is correct or not.

It takes lots of time, but you can accelerate the process by using a SRS software like Anki.

Anki is a software that’ll allow you to create virtual flashcard.

The software will then tell you when to study your flashcards so you quickly memorise them.

You can learn more about it The ultimate guide to learning vocabulary.

Let’s say you want to master the French present tense.

The first step is to find lots of example sentences using the present tense. These sentences should be:

Once you have your sentences, open Anki and add them with their translation.

If you’ve audio to go with the sentence, that’s even better!

Now all you have to do is open Anki everyday and review your sentences.

After a while, you’ll naturally be able to tell when something is correct and when it’s not.

Oh and I strongly encourage you to use Anki to learn vocabulary too. Check out the Ultimate Guide to Learning Vocabulary to learn how to do that.

Have you ever tried to learn French grammar in context? How did it go?

30 thoughts on “Don’t Study French Grammar, Do This Instead!”