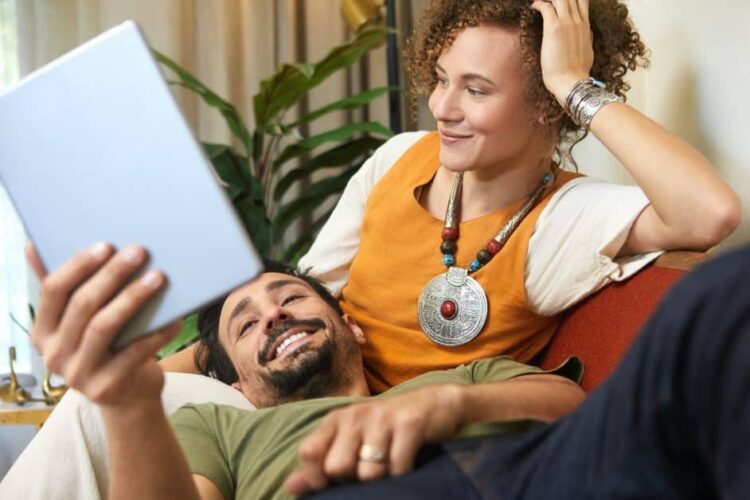 All kidding aside, whether you’re talking about your feelings for a crush or a friend, there are actually many ways to say “I like you” in French. They just aren’t very obvious at first.

Let’s look at some of the most common ways to say “I like you” in French!

An important note before we begin:

You can use either tu or vous with most of these expressions.

You might use vous if you’re talking to a group or in  a situation where you’re declaring your feelings to someone you have a formal or somewhat distant relationship with.

But in most cases when you say “I like you” in French, you’ll probably use the informal singular pronoun tu instead, so most of the examples that follow only use tu.

In French, the verb aimer means “to love”, but in some cases it can also mean “to like.” So, how can you clearly explain how you feel if you want to tell someone you like them, not that you’re passionately in love with them (yet)?

Je t’aime bien would seem to be a way to say you love someone a lot, but in fact, it’s a subtle way to tone things down.

If a French person tells you Je t’aime, it means “I love you.” But if they say Je t’aime bien, it means “I like you”. You can see a very funny (and NSFW) take on this in this video by comedian Paul Taylor (go to the 2:19 mark).

As Taylor points out, adding bien to the phrase Je t’aime can be a way to save yourself if you declare your love to a French person and realize the feeling isn’t mutual. On the other hand, if you’re on the receiving end of a Je t’aime bien, you might be a little bit heartbroken….

That said, Je t’aime bien isn’t just used as a romantic made-ya-look. It can be said boldly and clearly, to show affection that isn’t romantic.  For instance, as this cover of a song by classic French star Bourvil shows, Je t’aime bien can be the perfect phrase to express “I like you” or “I’m fond of you” in a genuinely sweet way.

Another thing to keep in mind is that aimer bien is also often used to talk about someone else. For instance: J’aime bien Manon, elle est gentille. (I like Manon, she’s nice.)

Je t’aime beaucoup is another phrase where a single, additional word changes the meaning of the core “I love you” into something else -something that, despite what you might expect, tones the meaning down.

Instead of “I love you so much”, Je t’aime beaucoup means “I like you a lot”.  There is love and attraction there, but it hasn’t quite reached love level yet.

Note also that, like aimer bien, aimer beaucoup is often used to talk about another person. For instance: J’aime beaucoup Manon, elle est gentille. (I like Manon a lot, she’s really nice.)

Another common way to say “I like you“ in French is Tu me plais (literally: “You’re pleasing to me”).

As this comment thread points out, when you’re using the verb plaire to talk about how something made you feel (a movie, an experience, etc.), it means “pleasing” or “enjoyable” in a neutral way. But when you use it to talk about how a person makes you feel, it implies romantic feelings but also physical attraction.

The best translation of Tu me plais is something like “I like you”/“I think you’re really pretty/attractive/handsome”/ “I’m really into you.”

So, if you want to show that you care deeply about a friend, don’t use this option.

This  catchy song  by Marie La Forêt (with a video shot at time before “No means no” was a thing), can serve as a good reminder.

Note that unlike aimer, if you use beaucoup with plaire, it does indeed mean the person finds you even MORE appealing than if they just said Tu me plais. So if someone tells you Tu me plais beaucoup, that’s good news! (Well, unless you don’t like them…).

If you want to seem cool (and can honestly pull it off), you may consider telling someone you like them romantically by using the phrase Je te kiffe.

This is a common slang term in France. The word kiffe is derived from a North African Arabic slang word for hashish, the idea being that you like or love someone so much that they make you feel like you’re on something.

By this token, the verb kiffer in general can also mean “to really enjoy something”.

As you might have guessed, Je te kiffe is extremely informal and will only really convey your feelings to someone who would also use it. A very rough equivalent in English would be “I’m into you.”

The more you hear and read French, the more you’ll probably come upon this phrase, as well as its more extreme version: Je te kiffe grave. That grave (a French slang term meaning “seriously”) takes things to another level, closer to being in love. So for “like”, stick to the simple Je te kiffe.

As you might have guessed, Je t’apprécie literally translates to “I appreciate you”. It’s another way to say “I like you.”

Je t’apprécie could mean that you like the person in a romantic way – in this sense, it’s a rough equivalent to Je t’aime bien.  But it could also mean “I like you as a friend.” People might add beaucoup to show extra warmth and sincerity.

Interestingly, different comment threads seem to suggest that opinions are divided about Je t’apprécie. For some, it’s as neutral or ambiguous as Je t’aime bien – it could be romantic or imply friendship. For others, though, it’s a clear sign that romance is not in the cards.

So if you want to say “I like you” in a romantic way, it may be better to choose another option on our list.

If you aren’t looking for romance and just want to tell a friend that they mean a lot to you, you could say Tu es un vrai ami to a male friend, or Tu es une vraie amie to a female friend. These mean “You’re a true friend.”

How to say “I have a crush on you” in French

One very specific kind of “I like you”is telling someone you have a crush on them. There are a number of ways to do this in French, but here are the three most common.

Literally “I crack for you” but think “I fall to pieces over you”, this phrase is very common and is also frequently used to talk about having a crush on someone or even to find something irresistible.

Je craque pour toi. (I have a crush on you.)

Elle a craqué pour lui. (She developed a crush on him.)

Je craque pour… is used so frequently in everyday spoken French that Tic Tac has even used a version of it in one of their French ad campaigns.

Despite how common it is, this phrase is very informal, so don’t use it with older people or in formal or professional situations.

Note that you can say either Je craque pour/ Je craque sur toi. In my experience, using the phrase with pour is more common.

J’ai un faible pour toi translates to “I’ve got a weakness for you” or “You’re my weakness”.

Since it can be used in both formal and informal situations, it’s the phrase to use if you want to sound more serious when confessing your feelings to your crush.

You’ll often hear this expression with petit: J’ai un petit faible for toi. Adding petit doesn’t change the overall meaning of the phrase, but maybe makes it a little more playful in tone, a bit like saying “I like you” versus “I you know, I kinda like you”.

With that in mind, enjoy this eponymous ‘70’s French pop song by Alain Delorme.

The phrase J’ai le béguin pour toi is another common way to say “I have a crush on you” in French, and it goes back a long way.

In the 12th century, les Béguines were members of a female religious order. They wore a special sort of bonnet, called un béguin. This headgear inspired the expression, but there are a few conflicting stories as to why.

One source,  for instance, claims that the phrase makes reference to the persuasive powers of convent founder Lambert le Bègue, who inspired many women to become members of the order.

On the other hand, French lexicographer Gaston Esnault suggests  that this term comes from slang used in 19th century brothels. An older expression, avoir le béguin à l’envers (have one’s bonnet on backwards), meant being a bit crazy or doing things in a strange, backwards way. Prostitutes who developed feelings for their clients were said by each other to avoir béguin à l’envers, which was finally shortened to avoir le béguin.

Eventually, the expression entered mainstream culture, as you can see, for instance, from this charming mid-20th century song by Lucienne Delyle.

Despite its religious and/or sexy origins, today, avoir le béguin is a totally neutral expression, with no hint of sexuality or religion involved. It can be used by men and women alike. You can use it in just about any situation, although it is a bit more old-fashioned than the other two options on this list.

Note that you can also avoir le béguin to talk about having a crush on someone, not just as a declaration. In fact, this may even be the more common way the expression is used today, at least in my experience. When using it this way, you may also hear it said avoir un béguin.

Il a un béguin pour elle. (He has a crush on her.)

Ils ont tous les deux le béguin pour Lucienne. (Both of them have a crush on Lucienne.)

Now you know 9 ways to say “I like you” in French. Now to get up the courage to use one of them with your crush….