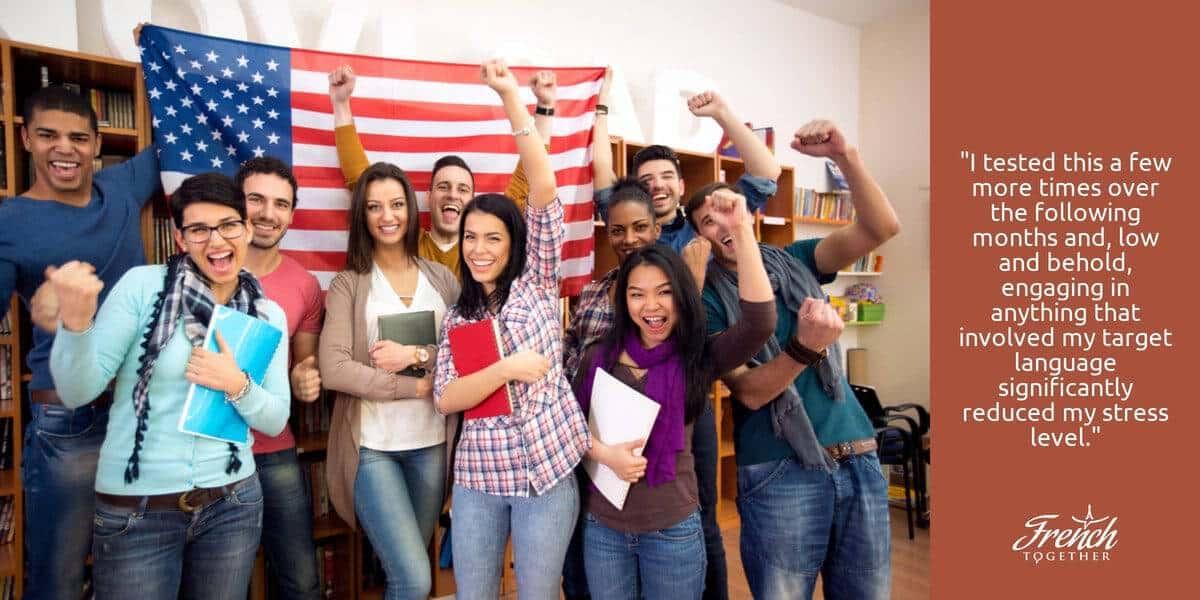 Travel to a foreign land. Seduce the girl. Business expansion.

Though there are countless reasons as to why people decide to learn a foreign language, these falling amidst the most popular, here is a word that isn’t often tagged alongside motivations for language learning: depression

My struggles with depression

At 33 (or as I like to say, 25 with 8 years experience), I am no stranger to that demon. I started seeing a counselor in fifth grade when I was being bullied by a boy in my class, I was in junior high the first time I tried to take my own life and I have battled various addictions since my teens.

Every professional you see will have one thing that they want to physically and metaphorically force down your throat: medication. Now, I’m not opposed to the thought. I would love if I could take a happy little pill and watch my worries transform to sunshine and rainbows. Unfortunately, after being a guinea pig to thirteen different types over the years, each one of which having the side effect of dragging me to the bowels of Hell in one way or another, I threw in the towel with that option.

I went to school for holistic nutrition where everyone and their great aunt twice removed told me that this diet, that herb, such and such mantra or some impossible Yoga pose was all I needed to be as peppy as a caffeinated cheerleader. I am here to tell you, friends, that you can hold down dog until your arms fall off and you are not going to wake up cured of all your ailments.

That isn’t to say these tools aren’t helpful. I incorporate them into my life and they do boast their own benefits. However, I found the missing puzzle piece to balanced mental health in the most unexpected of places

The unexpected effects of learning French on my depression

It was Spring of 2017 when I reached out to Benjamin Houy, the founder of French Together. I was a single mom who was overworked, overstressed and underwhelmed. My life had little direction, but I still had big dreams, one of which was to go to Haiti for the charity I serve to fill a need for distribution of the feminine hygiene kits we sew. There were two major barriers to that: money and the fact that I had sworn after a heartbreaking experience in Mexico that I would never again travel for humanitarian work to a country where I didn’t know the language.

I had tried some free language learning apps, but was stuck on anything that went beyond introducing myself and impressing people with my preschool French vocabulary (Look at me! I can say: Le chien est bleu!)

Benjamin took me under his wing. I will never know why particularly, but I will forever be grateful that his heart told him to take a chance on me. Over the following weeks, I found my French competences expanding, which was to be expected given the hours I was dedicating. But, I noticed something even more interesting. My anxiety was at a low, I hadn’t had a single panic attack in that time frame and those nasty little voices in my head that liked to constantly find every flaw and magnify it or sometimes fabricate things entirely…they had been mostly quiet.

I shrugged it off as coincidence and pressed on with my studies and my life. Until about a month later when a blowout with my ex had me shaking from a plethora of intense emotions. I opened my phone to send one of those infamous itemized-reasons-my-ex-is-a-prick messages to my best friend.

The last app that I had used on my phone were the voice files of Benjamin’s program.

“Ugh,” I told myself, chewing the inside of my lip with anger, “might as well at least finish the one I was on so I can add it to my daily language practice tracker.

That particular file was one minute and twenty four seconds. After it played through, I closed it and clicked on the blue bubble with the white envelope to begin my rant. Only, I didn’t feel the need to anymore. My jaw wasn’t clenched, my heart wasn’t racing and I wasn’t breathing like a bull about to charge.

The benefits of language learning to fight depression

I tested this a few more times over the following months and, low and behold, engaging in anything that involved my target language significantly reduced my stress level.

Instead of reaching out to my friend to vent that night, I reached out to another close friend, who worked in the medical field, to share my observation.

“It makes sense,” I remember him saying. “You are physically changing your brain.”

Though, I have no official medical background, I definitely have first-hand experience with anxiety and depression. It made sense to me too. Here’s why:

It Forces Your Brain to Shift Gears

Unlike the aforementioned voices who throw every weapon they have at you, the new voice in your head practicing your target language has to carefully think out what it wants to say, thus forcing you to practice mindfulness. This means that those destructive thought tracks have no room to catch traction and snowball.

Scientists are proving that the brain doesn’t actually have the capacity to multitask in the way that we think. Whether or not you agree with the research, there is no way that you are going to be able to ruminate on worries while conjugating verbs into the imparfait, this I assure you.

Your Worldview Is Forced to Expand

Depression is extremely isolating. You feel trapped in a tiny little world that begins to collapse in on you after a while. Your narrow vision of the world around you can lead to intense feelings of despair and loneliness. Learning a new language forces you to expand and opens windows to a culture that you never knew existed.

It Gives You A Reason to Socialize

This ties into the previous point, but language learning is about communication. A door opens revealing thousands more opportunities to meet new people, often in non-threatening and encouraging platforms and interact with them; something that depression likes to steal from you. Now, there is a whole community of people cheering for you to succeed, building you up and listening to you speak.

It Gives You A New Platform to Express Yourself

Feeling like you don’t have a voice can be disheartening even to people without depression, but for those of us struggling with it, we can feel especially worthless. It is dreadful to feel like no one cares about your opinions, worldviews or experiences. Now, you are given a whole new playground with a host of people interested in your culture and lifestyle.

It Boosts Your Self-Esteem

I remember when I wrote down my one-hundreth memorized French word (it was pompier in case you’re wondering) and I did the most ridiculous dance in my office. A couple thousand words later, I don’t still victory dance over vocabulary, but I cried after being able to communicate with girls in Haiti and laughed until my sides hurt when I understood why the interaction between Bradley Cooper and a journalist was so hilarious when the former had accidentally said that Robert DeNiro touched his corps instead of his coeur. Every day is a new accomplishment. Every day you are setting goals and reaching them. Both of which give you a nice dose of dopamine, the feel good chemical in your brain.

Mental disorders are tricky to navigate especially because the symptoms manifest differently for everyone and there is no one-stop-shop for treatment. It is important to seek professional guidance and formulate an effective treatment plan. For me, learning French is an important piece to that puzzle that I never would have considered but am reconnaissante pour toujours that it found its way into my life.

Amanda is a writer, a humanitarian for animal and human rights, a model and a mom. She self-taught herself French and is teaching her young son. She is a Global Ambassador for Duolingo, a Chapter Leader for Days for Girls and a blogger at Amanda Webster Health. Currently, she works at the French American school in Tempe Arizona.

11 thoughts on “How Language Learning Helped Me Fight Depression”