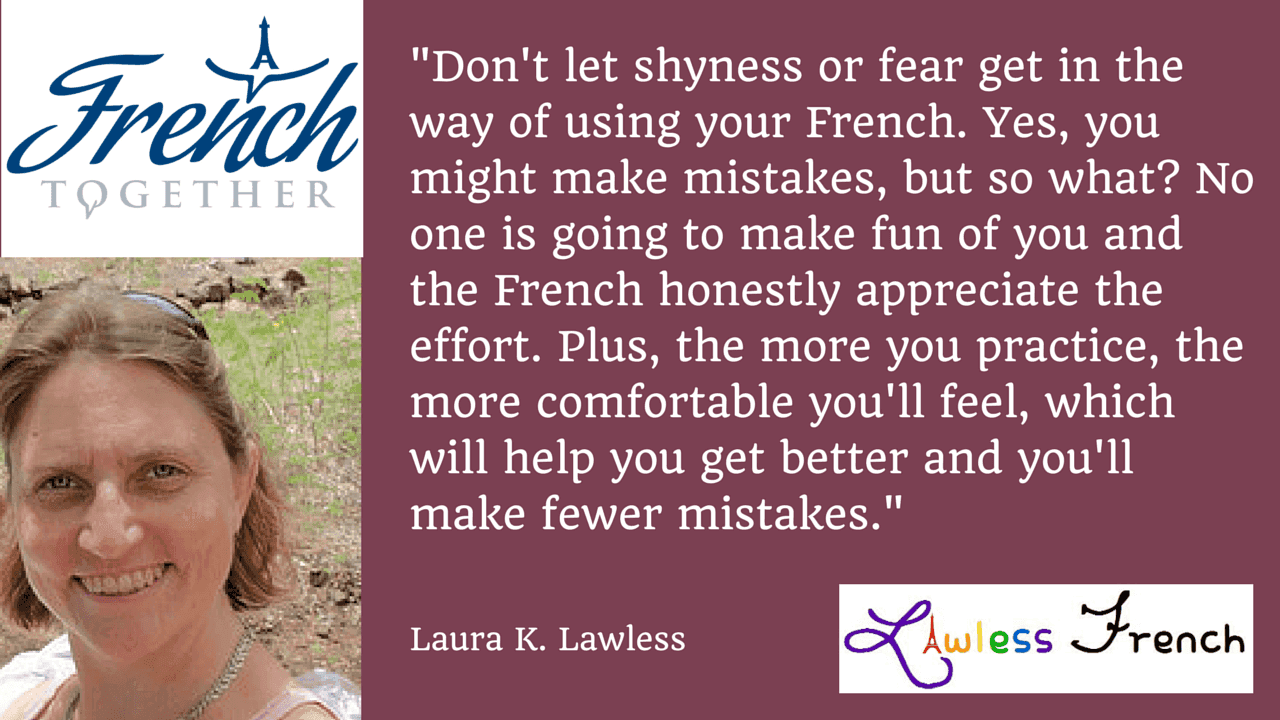 Laura K. Lawless is a lover of all things French, creator of Lawless French and former French guide for About.com.

In this interview, you’ll learn about her experience teaching French, discover her best tips for French learners and what she loves and hates about life in France.

Table of Contents
Could you tell French Together readers a little bit about yourself?
How did you learn French?
How and why did you decide to teach French?
What’s your favorite aspect of teaching French?
In your experience, what do French learners struggle with the most and what can they do about it?
You recently created Lawless French after years writing for about.com. What made you take this decision?
If you only had one tip to give to French learners, what would it be?
You now live in Guadeloupe after living in the south of France for five years. What do you like and dislike about the two places?
What are the main differences between life in France and life in the US?
Over to you

Could you tell French Together readers a little bit about yourself?

My name is Laura K. Lawless, I’m an American but have been outside of the US for 11 of the last 15 years. After living in Morocco, Costa Rica, and the South of France, my husband and I finally settled permanently in Guadeloupe.

How did you learn French?

I started learning in high school and really liked it, so I just kept at it all the way through college. That was all in the US; I later spent 6 weeks in an immersion program in Rouen and a month studying at the Alliance française in Toulouse.

How and why did you decide to teach French?

I’ve always been fascinated by languages, especially French, but I never intended to teach it – I wanted to be a conference interpreter.

When that didn’t work out, I spent several years as an admin assistant, which bored me silly. In desperation, I taught adult ed French and Spanish for a year, but I was terrible at it, so I gave that up and then thought long and hard about what I really wanted to do. The answer to that was work freelance, so I taught myself HTML from a book and started looking for work.

Almost immediately, I discovered an opening for a “French Guide” at an online network called The Mining Company. I applied, built a test site, the company’s name changed to About, and my site launched in June 1999.

Being able to share something that I love so much with many thousands of people all over the world.

In your experience, what do French learners struggle with the most and what can they do about it?

It really depends on each student’s personal learning style and personality. Some people struggle with grammar, but they’re not shy about talking. Others are great at grammar – even fascinated by it – but find it daunting to actually get out there and speak.

I think the best thing you can do is figure out your own learning style and find a method that caters to that. My site is geared more toward the latter simply because that’s my own style, but I think there’s enough material there for just about anyone to pick and choose what they need.

You recently created Lawless French after years writing for about.com. What made you take this decision?

After 15 years of being beholden to someone else, I decided I wanted full control over my content and site design.

If you only had one tip to give to French learners, what would it be?

Don’t let shyness or fear get in the way of using your French. Yes, you might make mistakes, but so what? No one is going to make fun of you and the French honestly appreciate the effort. Plus, the more you practice, the more comfortable you’ll feel, which will help you get better and you’ll make fewer mistakes.

You now live in Guadeloupe after living in the south of France for five years. What do you like and dislike about the two places?

I loved living in the South of France, especially Menton. It’s such a beautiful town and the Mediterranean Sea is fantastic for swimming and kayaking in the summer.

Plus, Menton is close to both Nice and Italy, so traveling to other countries was both easy and inexpensive. But I’m miserable in cold weather, and even in Menton, the winters were just too difficult for me.

Being warm became a priority, so we moved to Guadeloupe. Now I’m able to swim year round, but travel is both difficult and expensive.

In a few years, my husband and I will probably take off and travel for several months in order to make up for being stationary for so long.

What are the main differences between life in France and life in the US?

Public transit is fantastic in the Hexagon – trains, buses, the métro in cities. Sure, there are strikes, but generally speaking, you can get wherever you need to go, on time, in comfort, and for a reasonable fee.

We never owned a car in all the time we lived in Hyères and Menton (though we rented one to travel around a few times), whereas outside of cities, I don’t think there are many places in the US where you could survive without a car. (Guadeloupe is another story; buses are irregular and bizarrely expensive, so a car is essential.)

And of course France is infamous for its red tape and relatively poor customer service. Just about everything takes longer, plus many companies and banks charge by the minute for phone calls to customer service numbers.

In the US, every company worth its salt offers a toll-free number.

Do you relate to Laura’s experience of life in France? Share your experience in the comment section below this article!