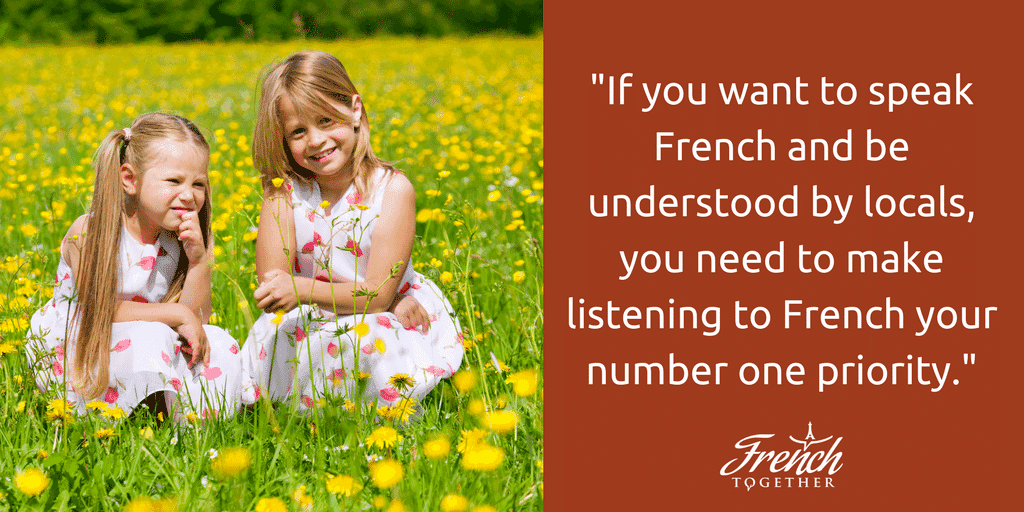 Nearly all kids are fluent in their native language by the age of 5.

Is it because they are better at learning languages?

Or is it simply because they learn differently?

While the jury is still out on this one, there is no denying children can teach us a lot when it comes to language learning.

Babies listen to their native language long before they see it written.

In fact, they already start listening in the womb of their mother.

For the first 4 months of their life, all babies do is listen.

Listening long before they speak or read helps babies learn to pronounce words without being corrupted by the idea of how a written word should sound.

Babies can’t read so they don’t wonder how to pronounce words, they just try to repeat them as they hear them.

Unfortunately, most French courses completely disregard the importance of listening and treat it as a secondary skill.

They start by teaching you grammar and asking you to read.

Some courses don’t even give you the chance to listen to French at all.

That’s why so many learners struggle with pronunciation.

They never heard French so they guessed the pronunciation. They see “merci” written and decide that it probably sounds like “mair-see”.

Unfortunately, French words sound nothing like the way they are spelled and trying to guess their pronunciation will only do one thing: make you sound like a tourist.

If you want to speak French and be understood by locals, you need to make listening to French your number one priority.

After spending 4 months doing nothing but listen, kids start speaking.

After a while, these sounds become words.

Then they become sentences. Broken sentences but sentences nonetheless.

Yet kids never give up.

And you shouldn’t either!

Learning French needs to become a habit, something as easy as brushing your teeth in the morning.

Once learning French becomes a habit, doing it every day requires less resistance because you don’t rely on willpower anymore, you just do it.

According to writer Charles Duhigg, the best way to form a habit is to use a cue, routine, reward system.

For example, you could:

Children make mistakes all the time.

Mistakes are just a byproduct of their willingness to express themselves.

As a French learner, the only way to avoid mistakes is to remain silent, not a great strategy if your goal is to speak French.

If you want to speak French with confidence, you need to do what children do: accept that mistakes are part of the learning process and that each mistake you learn from brings you one step closer to fluency.

I know speaking French is scary. What if people make fun of you? What if they think you’re just a dumb tourist?

If you find a French conversation partner or go to a French speaking event, people won’t make fun of you either because they’ll know you’re here to learn.

In a safe environment, mistakes are welcomed as the essential part of language learning that they are.

Still think that speaking is too scary?

Use HelloTalk to find a conversation partner you can write to, or use lang-8 to write in French and get free corrections from native speakers.

Whether you choose to write or speak, you need to express yourself in French because that’s the only way you’ll learn from your mistakes.

Children repeat words hundreds of times before they get their pronunciation right.

Just like Michael Jordan in the famous Nike commercial, they try again and again. And that’s why almost all kids speak their native language fluently by the age of 5.

Unless you’re a genius, this isn’t going to happen. You need to regularly review what you’ve learned so it stays in your long term memory.

Like a child learning his native language, you need to listen to each sentence hundreds of times, you need to repeat it and use it until it’s so anchored in your mind you know you’ll never forget it again.

But you shouldn’t do that in one sitting. It’s important to do it over a long period of time. And the best way to do that is to use a SRS software like Anki, something I show you how to do in this article.

What else do you think children can teach us about language learning?