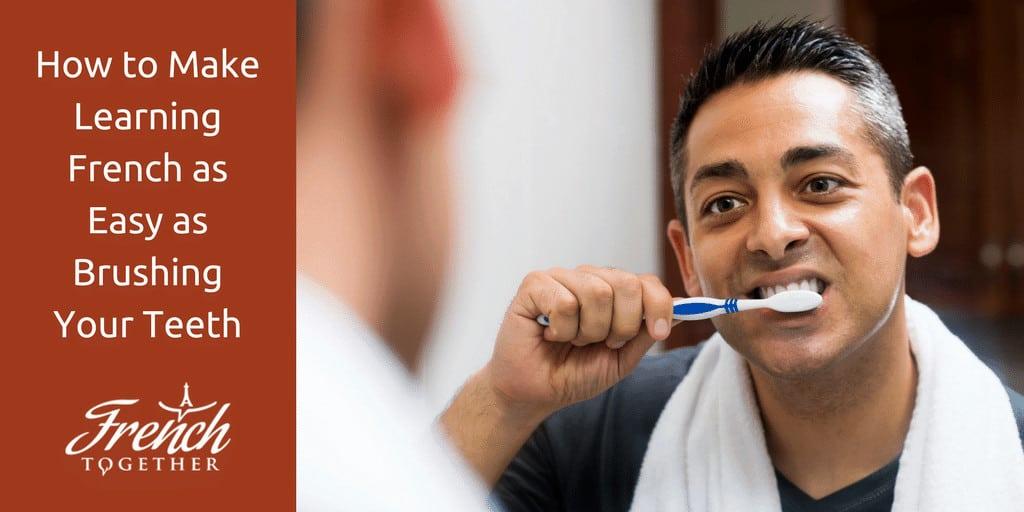 You just decided to learn French and feel super motivated. You can already picture yourself sitting in a bistro in Paris and chatting with your French friend Pierre.

The first study session goes well, you learn how to introduce yourself and feel on top of the world.

Then life gets in the way, you come back home tired and learning French doesn’t seem that exciting anymore. What seemed easy now confuses you. Why is French grammar so crazy? And this pronunciation, why do they all speak so fast?

We all hit roadblocks, and your success as a French learner depends on how well you handle them.

This article will help you plan ahead and make learning French a habit so you can quickly make progress and speak French with confidence.

Failing to plan is planning to fail

Author Alan Lakein is said to have written that “failing to plan is planning to fail” and that’s particularly true when learning French.

If you want to succeed, you can’t simply rely on willpower and hope for the best, you need to plan ahead and make sure you have the right mindset, environment and strategies.

Here are 5 important things you should do before you even start learning French.

#1 Know why you are learning French

Are you learning French because you dream of having a chat with a local? Because you love how the French language sounds? Are you hopping knowing French will help you find a job more easily? Do you plan to retire in the south of France?

Whatever your motivation is, write it down on paper then put the paper on your fridge, desk or somewhere where you’ll regularly see it!

This will serve as a reminder and help you stay motivated when you struggle.

#2 Be aware of your invisible scripts

Invisible scripts are the enemy of success.

They hide in the dark corners of your mind and push you to avoid doing the work. They sap your confidence and negatively impact your learning experience.

They range from the innocent “I’m too tired to study French now” to the more pervasive “I’m just terrible at languages”.

The worst is that we rarely know they are there.

I only realize I have invisible scripts when I take the time to analyze my thoughts. And doing the same can help you stay motivated and make sure you don’t give up.

Some of these scripts are so widespread that they are considered general truths.

The idea that children are better at learning languages, for example, is a well-known myth, a myth that discourages lots of people from learning French.

That’s why it’s important to make a list of all your invisible scripts before you start learning French.

Once you’re aware of your invisible scripts, you’ll quickly notice how often they come to mind and will become better at ignoring them.

#3 You need a clear deadline

When I talk to students who learn with the French Together app, I often notice that the most successful learners tend to be those who not only have a clear reason for learning French but also those who have a deadline.

You may need to learn French because you’ll go on a trip to France soon or because you want to study in a French University next year but what if you don’t have any deadline?

What if learning French is just a dream you hope to achieve one day?

If that’s the case, I recommend you to create a deadline yourself. For example, you could:

We all have a tendency to procrastinate and having a deadline forces us to get things done.

Once you know why you want to learn French and have a clear deadline, it’s time to make a precise plan to make it happen.

Some courses like the French Together course offer you a clear roadmap to follow so you can just focus on learning without wondering what to study next but you still need to set goals in order to succeed.

That’s when things often go wrong. If your goal is “I will speak French fluently within one year”, you’re unlikely to succeed because it’s not precise enough.

That’s when SMART goals come in handy. A SMART goal is:

SMART goals are easier to reach because they offer you a clear idea of what to do next.

Instead of saying “I will speak French fluently in a year”, you say “I will do one lesson from the French Together course every day at 5 PM over the next 30 days”.

Having SMART goals help you know exactly what to do next and track your progress.

It’s motivating because you know that every second you spend learning French is getting you closer to your ultimate goal: speaking French with confidence.

How to make learning French as easy as brushing your teeth

In fact, habits happen in a different part of your brain, the basal ganglia.

That’s why you don’t need willpower to brush your teeth.

You just do it because you’re used to doing it. And you can achieve the same with French.

Now the question is: how do you make learning French a habit?

According to Charles Duhigg, author of The Power of Habit, every habit has 3 components:

The cue is a trigger for the behavior to start. It’s what gives you the motivation to start studying in the first place.

Your trigger could be:

The routine is the action of studying French. It could be

Sometimes, you’ll come home and the last thing you’ll want to do is study French. When that’s the case, don’t force yourself to do it.

Instead, just think of other ways you could learn French. For example, you could:

Still don’t have the motivation to get started? Follow the 5 minutes rule.

Tell yourself that you’ll study for at least 5 minutes.

It’s easier to start this way because you know that you can stop after only 5 minutes.

Here is the thing though, you’ll often keep studying for much longer because it’s easier to continue once you started.

This little trick often helps me study when I’m tired.

The reward is an essential part of habit formation because it’s what your brain associates with the habit.

You may feel that you don’t need a reward to study French but studies have shown that it’s much easier to create a habit if you associate it with a reward.

When you go to the gym, the reward is the hormone your body produces but there is no such hormone when you study French so you have to create one.

Your reward can be anything as long as it’s something you truly enjoy. It could be:

Voilà, you now know how to plan ahead and turn studying French into a habit. It’s now time to get started!

And you, what’s your best tip to stay motivated while learning French?

6 thoughts on “Can’t Keep Up? How to Make Learning French as Easy as Brushing Your Teeth”